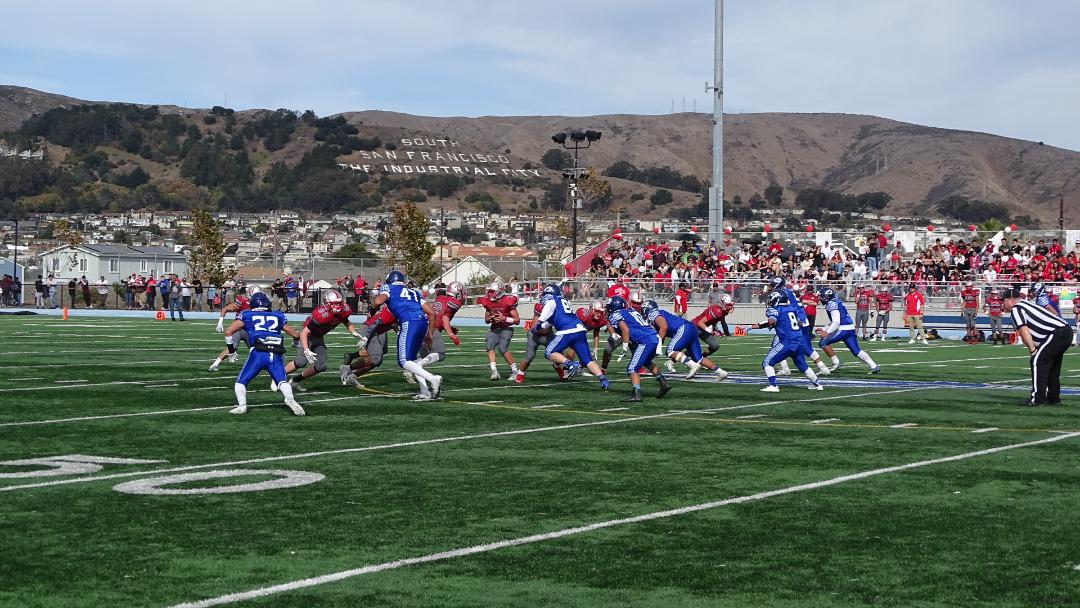 If history proves a kind judge, the 57th Bell Game on Saturday will not be remembered by HOW it ended, but by WHAT it ended.

For the first time since 2003, El Camino defeated South City High in the annual rivalry, buoyed to a 41-15 margin by five Javion Tarusan touchdowns. The win ended a 14-game losing streak by El Camino, which has freshmen on campus that had not been born the last time the Colts won a Bell Game.

But, as sometimes happens in rivalry game, emotions ran high — a little too high. Officials ended the game early, expressing their dismay with seven fourth-quarter personal fouls by symbolically walking off the field with 2:36 left on the clock. It was an anti-climatic finish to a game that the Warriors had led at the half.

“I’ve never seen it,” said El Camino coach Archimedes Junio. “It’s a rivalry game and there were a lot of personal fouls, but a seven-man crew walking off the field because of a taunting penalty is pretty outrageous. The last thing they did was they pointed at the scoreboard and walked off.”

Tarusan was the hero in El Camino’s win, scoring two touchdowns on kick returns, two on interception returns, and one receiving.

“Amazing. I don’t remember anything like that,” Junio said. “He’s been doing that all year, leading us in touchdowns, leading us in interceptions, everything.”

Tarusan, a junior captain, said the win would hopefully start a new streak.

The final score did not reflect the back-and-forth nature of the first half. The Warriors got on the scoreboard first, with a 43-yard field goal by Nelson Ramirez capping an eight-play opening drive, which was the only score of the first quarter. 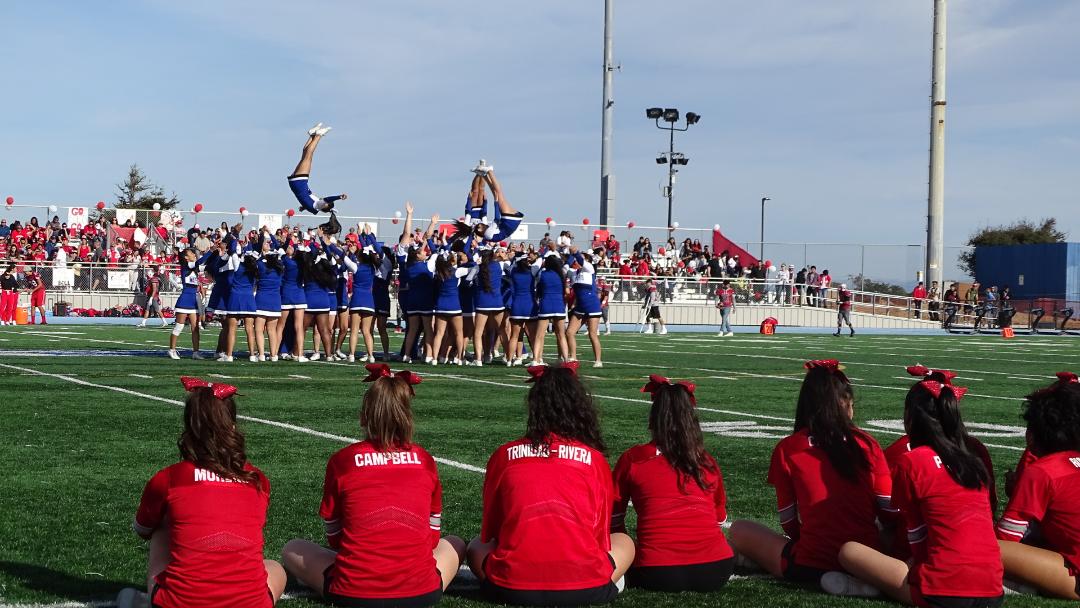 Early in the second quarter, Tarusan worked the first of his magic: first fumbling, then picking up a South City punt and taking it through the approaching Warriors line 60 yards to put the Colts up 7-3 after the extra point.

“It was my blocking,” Tarusan said. “I saw a hole and i just ran through and I ended up with a touchdown.”

After a trade of punts, South City got a big play when Frank House, well… took it to the house, taking a Demetrius Gutu pass 75 yards up the left for a touchdown with 5 minutes left in the second quarter.

How long did it take El Camino to respond? About the 14 seconds it took Tarusan to pull the ensuing kickoff down at the six and run 94 yards up right for another Colts touchdown. EC led 14-9 with 4:46 before halftime. 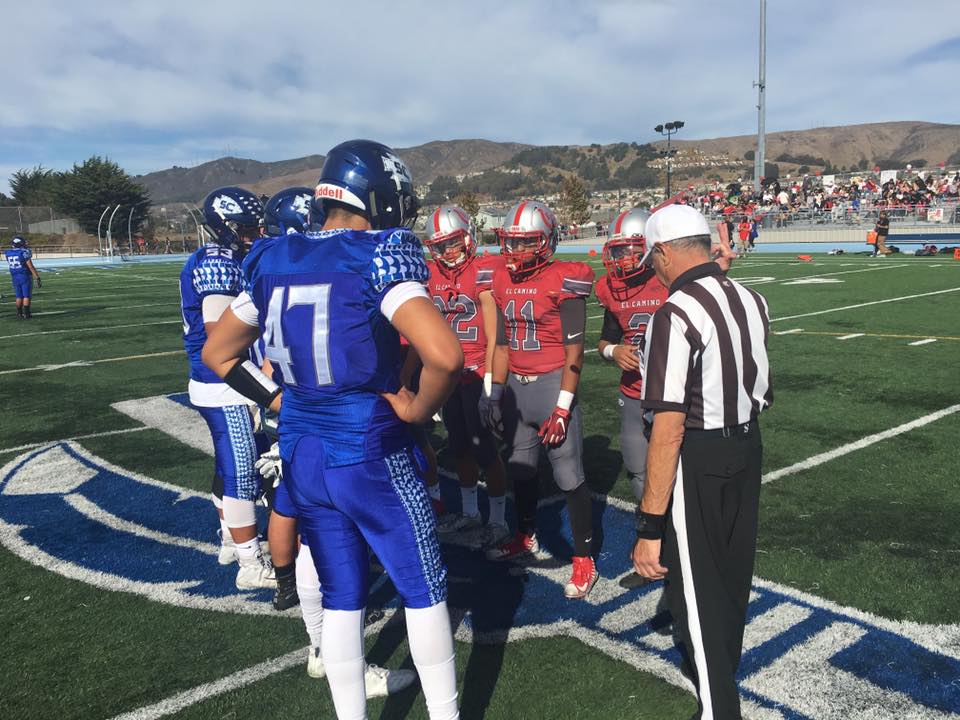 Two minutes later, Noel Elasia burst through the middle for a 21-yard touchdown run for the Warriors. Although South City could not convert the two-point PAT try, its defense did have a three-play goal-line stand on EC’s next drive and led 15-14 going into the half. When El Camino running back Jonas Junio was injured early in the second half, there was some trepidation on the Colts sideline.

“I was nervous, but I knew that with the adjustments we were going to make, we’d be OK,” Junio, the coach, said regarding the feeling he had when Junio, the player (and coach’s nephew), went down.

There indeed was no real need to worry, as El Camino scored four unanswered touchdowns after the break. The first came on the same series Jonas Junio was hurt on, as Tarusan pulled down a 24-yard pass from sophomore quarterback Noel Valdez and carried it 24 yards for a touchdown. The Colts, or rather, Tarusan stopped South City’s next drive with a 90-yard interception return when the Warriors threatened the red zone.

Senior running back Ivan Pineda scored on a three-yard rush midway through the fourth quarter to cap a long El Camino drive, then Tarusan stopped the Warriors’ next drive with a 51-yard pick-six interception.

“Right before that play, this guy targeted me and it just fired me up,” Tarusan said. “I had to go out a play, I came back in and got the pick-six. It was just destined.” 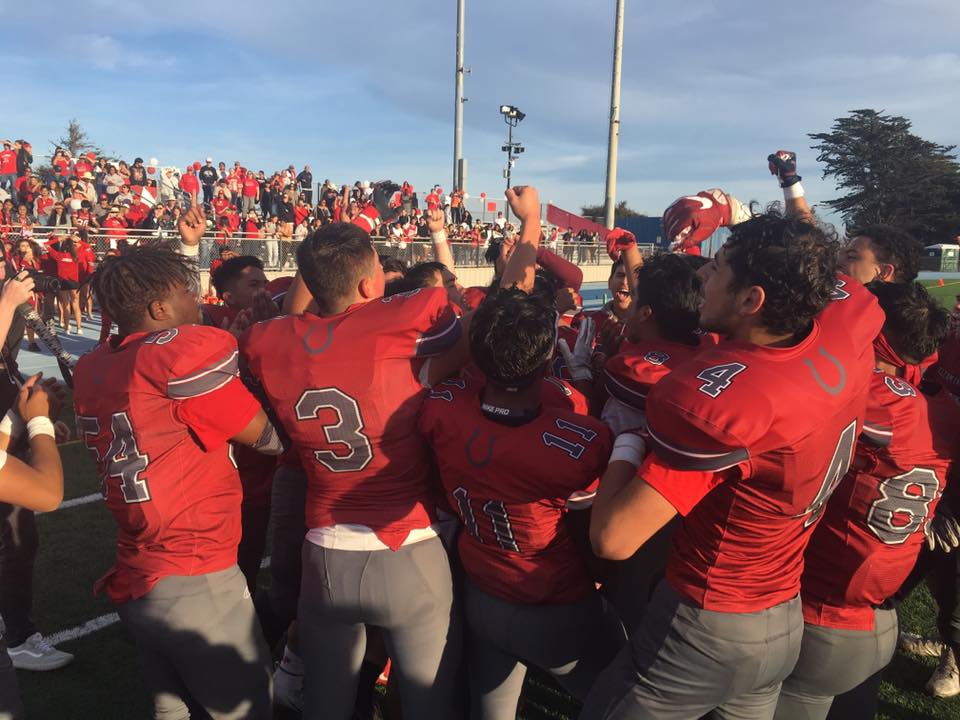 The loss capped a tough year for South City, which finishes 0-10 under first-year coach Jerome Lee. The Warriors tallied 195 yards on the ground, led by Elasia, who had 16 carries for 102 yards. Romeo Alapati added 67 yards on 12 carries. Gutu completed 7 of 19 yards for 149 yards, with one touchdown and two interceptions.

El Camino finishes 4-6 under first-year coach Archie Junio. The Colts tallied 102 yards on the ground, paced by 60 yards on 13 carries by Jonas Junio prior to his injury. Valdez completed 9 of 11 passes for 105 yards.

“This is amazing,” coach Junio said, savoring the win. “We’re trying to change the culture of this whole rivalry and we’re trying to do the right things. I’m just so glad it happened on my first year here.”

I want to know what’s going to be done about the Referees WALKING out the game. And I believe it was under 5 minutes they walked out. What is that teaching the YOUTH of this generation.. walk away when things get rough. Walk away and don’t see things through. Come on REFF! Your Grown Men. So disappointed in the refs for walking out.