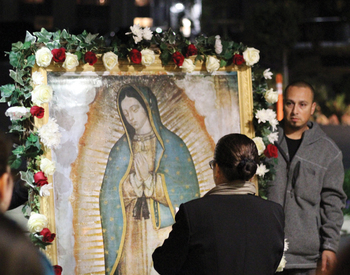 St. Veronica parishioners pray the rosary during a candlelight pilgrimage in honor of Our Lady of Guadalupe. Pope Francis said Mary’s life encourages Catholics “to live the audacity of faith and hope.” (Photo by Nicholas Wolfram Smith/Catholic San Francisco)

Punctuated by shouts of “Viva Guadalupe,” St. Veronica Parish in South San Francisco celebrated the feast day of Our Lady of Guadalupe Dec. 12.

The evening began with a candlelight rosary procession around the parish property, led by two parishioners carrying a larger than life picture of Our Lady of Guadalupe. In between decades of the rosary, the parish sang cheerful hymns, led by Bay Area mariachi band Mariachi Mexicanisimo.

The Mass and reception also featured performances by Teokalli, a local Aztec dance group. Dancers wore the image of Our Lady of Guadalupe as they danced down the aisle to honor Mary.

Mass was celebrated by Father Charles Puthota, the pastor of St. Veronica, and Father Mario Olea and Father Darwin Estrada. Father Olea thanked the parish for coming, and noted the diversity of the crowd attending Mass to honor Our Lady.
Father Puthota told Catholic San Francisco Our Lady of Guadalupe is popular because of her appearance in Mexico and because she is the patroness of the Americas.

“There’s a special love for our Blessed Mother of course, which drives people to Mary, and Mary leads people to Christ. Especially in this advent season, the feast is so beautifully placed,” Father Puthota said.

But the feast day is also a special cultural celebration for Mexico and Latin America. The evangelization efforts of Spanish missionaries had struggled in the wake of the conquest of Mexico. When Our Lady of Guadalupe appeared to St. Juan Diego outside the old capital of the Aztec empire, as Aztec royalty, and spoke to him in Nahuatl, his native language, she opened room for the spread of Catholicism across Mexico. The popular hymn “La Guadalupana,” sung by parishioners at St. Veronica, says “from then on for all Mexicans being Guadalupan is essential.” In later revolts against the colonial government of Spain, Mexican rebels carried the image of the Virgin of Guadalupe on their flags.

Father Puthota said Mary’s appearance at Guadalupe is an example of “inculturation,” or entering into a culture to proclaim the Gospel.
“You have to be within the culture to be able to evangelize,” he said. “Jesus became part of our human culture to draw us closer to God.”

In his homily for the Feast of Our Lady of Guadalupe, Pope Francis said the Blessed Mother’s life “is marked by the ability to make others protagonists. It gives courage, teaches us to speak and above all encourages us to live the audacity of faith and hope,” he said.

“With the heart of a mother, she seeks to raise and dignify all those who, for different reasons and circumstances, were immersed in abandonment and oblivion,” Pope Francis said.

Because of the continental devotion to Our Lady of Guadalupe, he continued, she is remembered as “Mother of a fertile and generous land in which we all can find ourselves playing a leading role in the construction of the Holy Temple of the family of God.”