Everything South City is proud to host a VIP table at the upcoming fundraiser co-sponsored by the Oyster Point Yacht Club and Dominic’s at Oyster Point on Saturday, March 2nd with proceeds to benefit the North Valley Community Foundation for the Camp Fire Victims. Our VIP table guests will include former South City residents Jocelyn Ilitzky Cronin and her husband John Cronin (Redwood City Fire, retired), and Andy Saunders along with his significant other, Cynthia Roberts, also from South San Francisco.

Jocelyn, who now calls Petaluma home, is always at the ready to volunteer for worthy causes including years with the Polly Klaas Foundation and her participation in the annual Sutter Health Breast Cancer fundraiser, ‘Catwalk for a Cure‘ since 2010. When the call went out that Everything South City and SSF ELKS were to host a pancake fundraiser for our Princess Warrior Juliana Pena, Jocelyn was the first to sign up to help in any way she could.

Jocelyn embraces another model, Colleen Sullivan, who is also from South City, on the Catwalk for a Cure Breast Cancer Fundraiser.

Jocelyn has now created another opportunity to help Camp Fire victims in need; Campaign Propane/ Operation Warmth. Using money she received through her birthday donation drive as seed money, and partnering with Petaluma’s DeCarlis Propane , she has been instrumental in bringing 25 filled propane tanks to victims of the Camp Fire in Paradise. She now has a community of senior citizens who are moving back into their trailers, “Wouldn’t it be great that they come back home to warmth?” Jocelyn asks in her hallmark voice of excitement. “If it weren’t for DeCarli’s generosity of donating propane we wouldn’t be able to succeed in our efforts. These people up there lost everything, the least we can do is bring them Operation Warmth!” 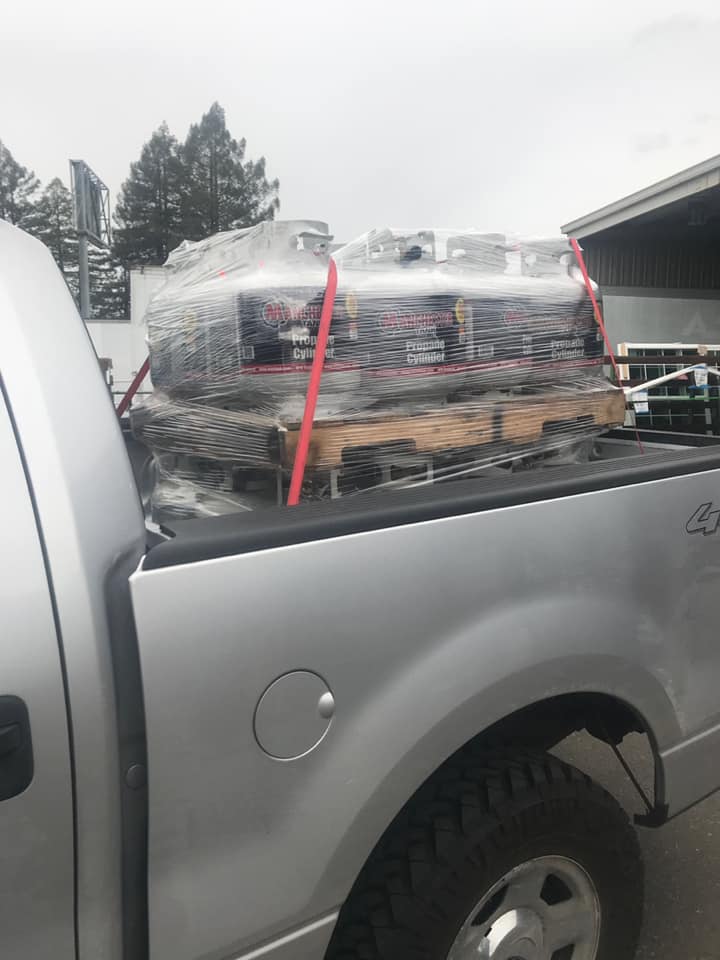 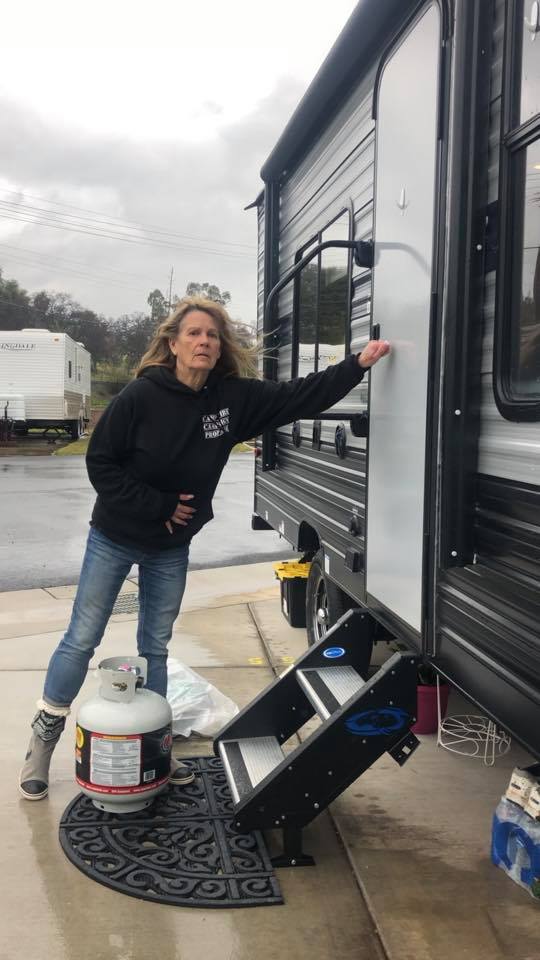 Wind, nor rain, nor fire – will keep Jocelyn from reaching those who need help as she displays her lifelong South City values 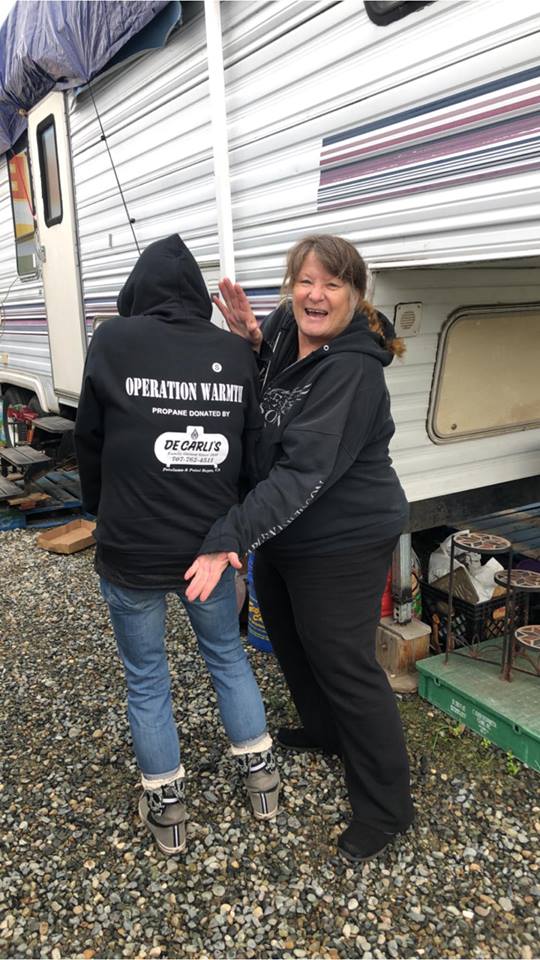 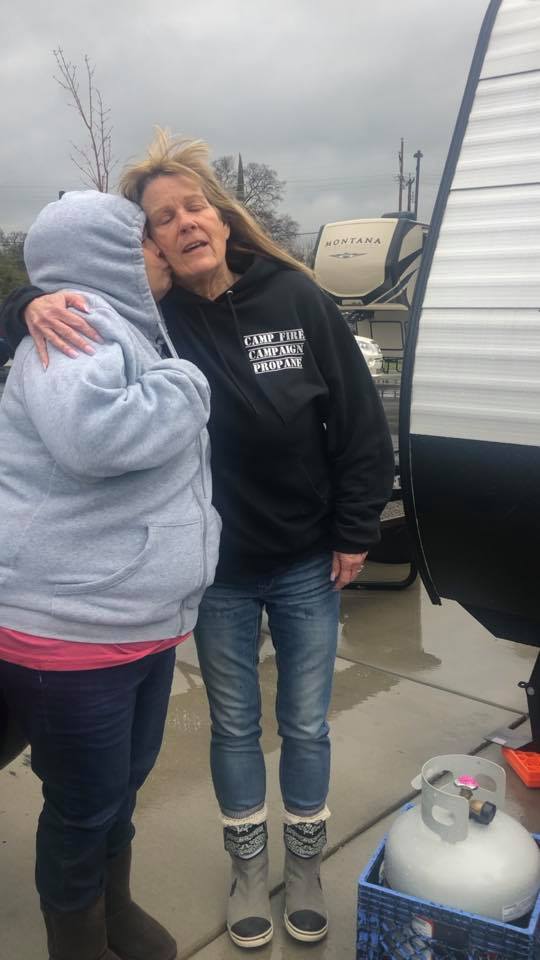 We all stood by watching the fires burn, in the safety of our own environment away from the Camp Fire that destroyed the town of Paradise and surrounding communities of with a complete feeling of helplessness. It seems we all have connections with those who suffered these great losses.

Andy Saunders, and his brother Norm, were raised in Avalon Park, and relocated to Paradise, as did their parents.  Their mother, Janet Saunders, had been a volunteer and guiding hand in the 1980’s with the Historical Society of South San Francisco. She passed on in 2009 and her sons decided to remain in Paradise. 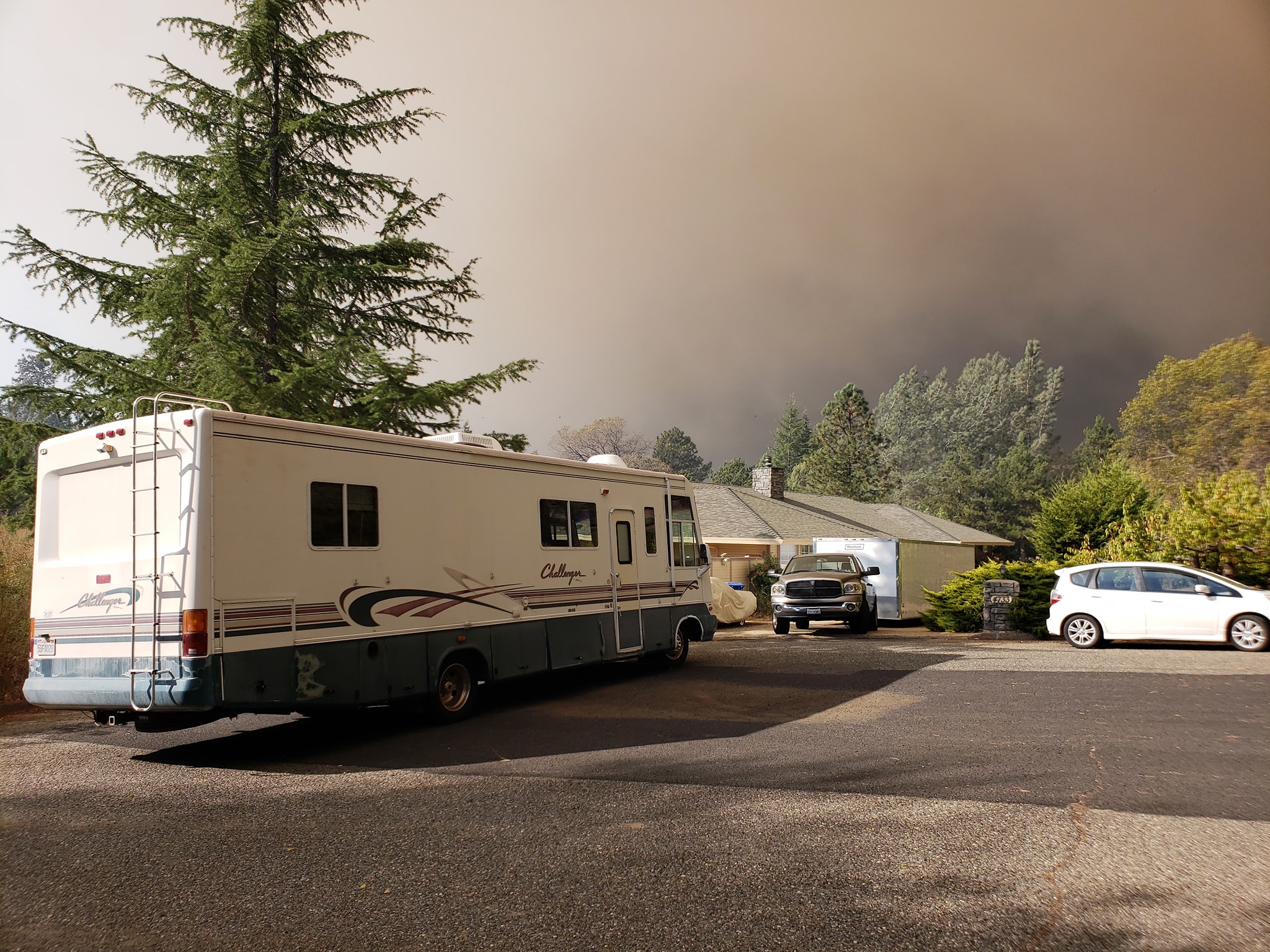 One look back at his home, Andy saw the thick smoke from the approaching Camp Fire as he evacuated.

As the Camp Fire grew with thick clouds of smoke coming closer, Andy evacuated his home never knowing what he might return to.

Andy continues to power through what might have had so many of us on our knees, as seen in his public November 11, 2018 FB post

“The death of a dream can in fact serve as the vehicle that endows it with new form, with reinvigorated substance, a fresh flow of ideas, and splendidly revitalized color. In short, the power of a certain kind of dream is such that death need not indicate finality at all but rather signify a metaphysical and metaphorical leap forward.” 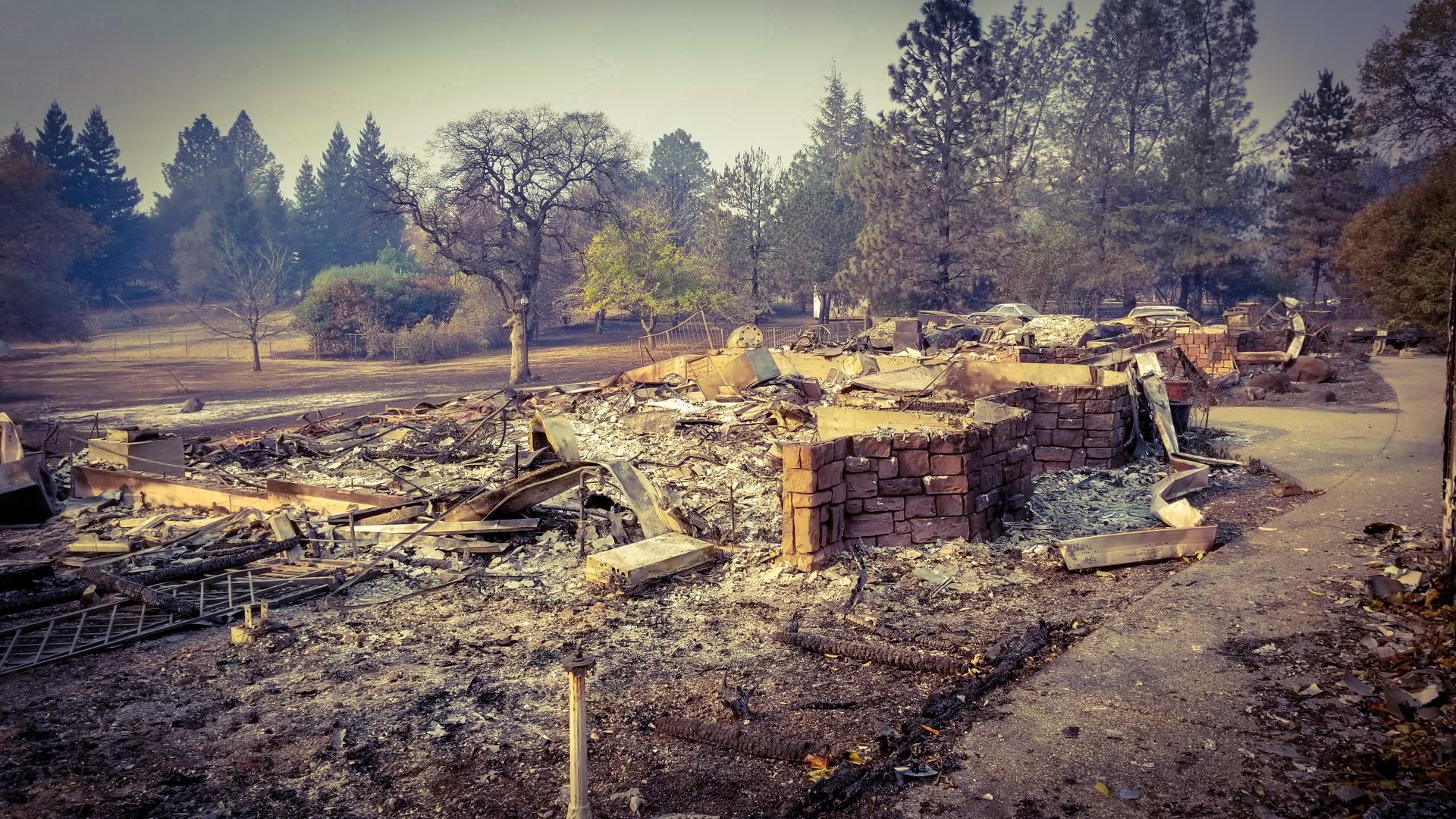 What is left of Andy’s Paradise home today

Each year Andy hosts a South City reunion bringing lifetime friends together while adding new ones to the mix at different venues, in and around, South City. His 2010 Day on the Green Festival, held at the Joe Fernekes Building in Orange Park, is still being talked about today. His love of classic cars and golf also bring old friends together regularly. Beyond that, Andy is the kind of person who will always go out of his way to help others, it is who he is. Learning early on in life the value of family and friends, and the relationships we create and maintain for life, Andy exemplifies these are the ties that bind us as South City strong, no matter where we might move.

Andy perhaps wanted to shed a tear or two at the raging fire’s devastation all around him but quickly regained his optimistic attitude that things would work out fine. His brother, Norm, lost his apartment and his carpet cleaning business and Andy immediately set about helping him resettle via a Gofundme campaign.  Andy’s company, 24 Hour Telecom, requires him to be on the road often, he is looking at other locations to possibly live, yet South City will always remain his home town.

Although a good part of Andy’s extensive collection of classic vintage cars have been lost, he remains optimistic in his thinking as he posted publicly  “I am blessed in spite of the losses that are not insured.” A list of his cars, some of which are now for sale, can be found CLICK HERE. 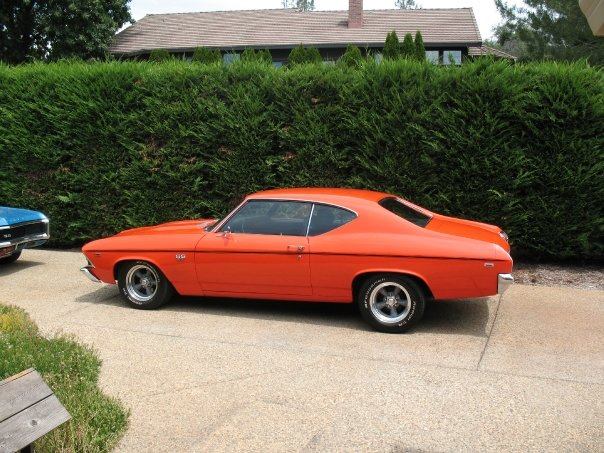 Andy spent years collecting and restoring vintage classic cars, most were vaporized in the Camp Fire 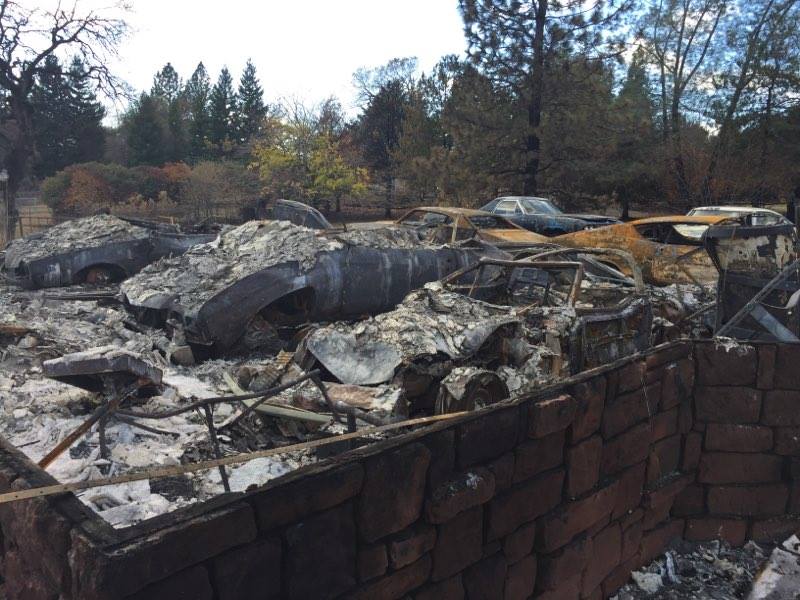 The majority of Andy’s classic car collection was vaporized

Both Jocelyn and Andy have continued to use the values and skills they learned as youngsters in South City to make the world a better place. They both are connected to the Camp Fires, Jocelyn as an organizer and helper, Andy as a survivor and helper as well. And they are connected to South San Francisco which makes it worthy to acknowledge their contributions to their hometown and to a larger world. 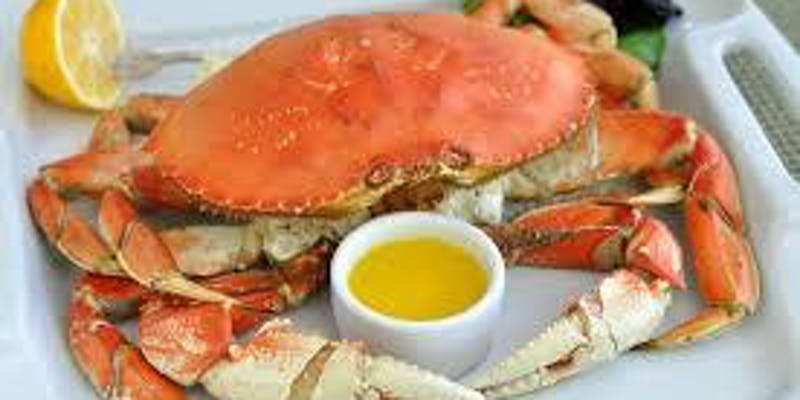 Thank you to the fundraising Crab Feed hosted by the Oyster Point Yacht Club and Dominic’s at Oyster Point.
The need is great.

This opportunity created by the Oyster Point Yacht Club and Dominic’s of Oyster Point by this Crab Feed Fundraiser is yet another example of the outstanding giving spirit borne within our community as individuals, clubs and businesses intersect to help others.

And while we are focusing on those coming together for this special event, we mustn’t forget the bigger picture: 86 people died in this horrific fire storm, thousands were injured including firefighters who were trapped while working this beast, 14,000 homes were lost in Paradise alone, 153,336 acres were burned in Butte County. While this ‘incident’ is no longer front and center in our news, there is a whole region working to rebirth their scarred town, and their stories make us realize there is more work to be done. 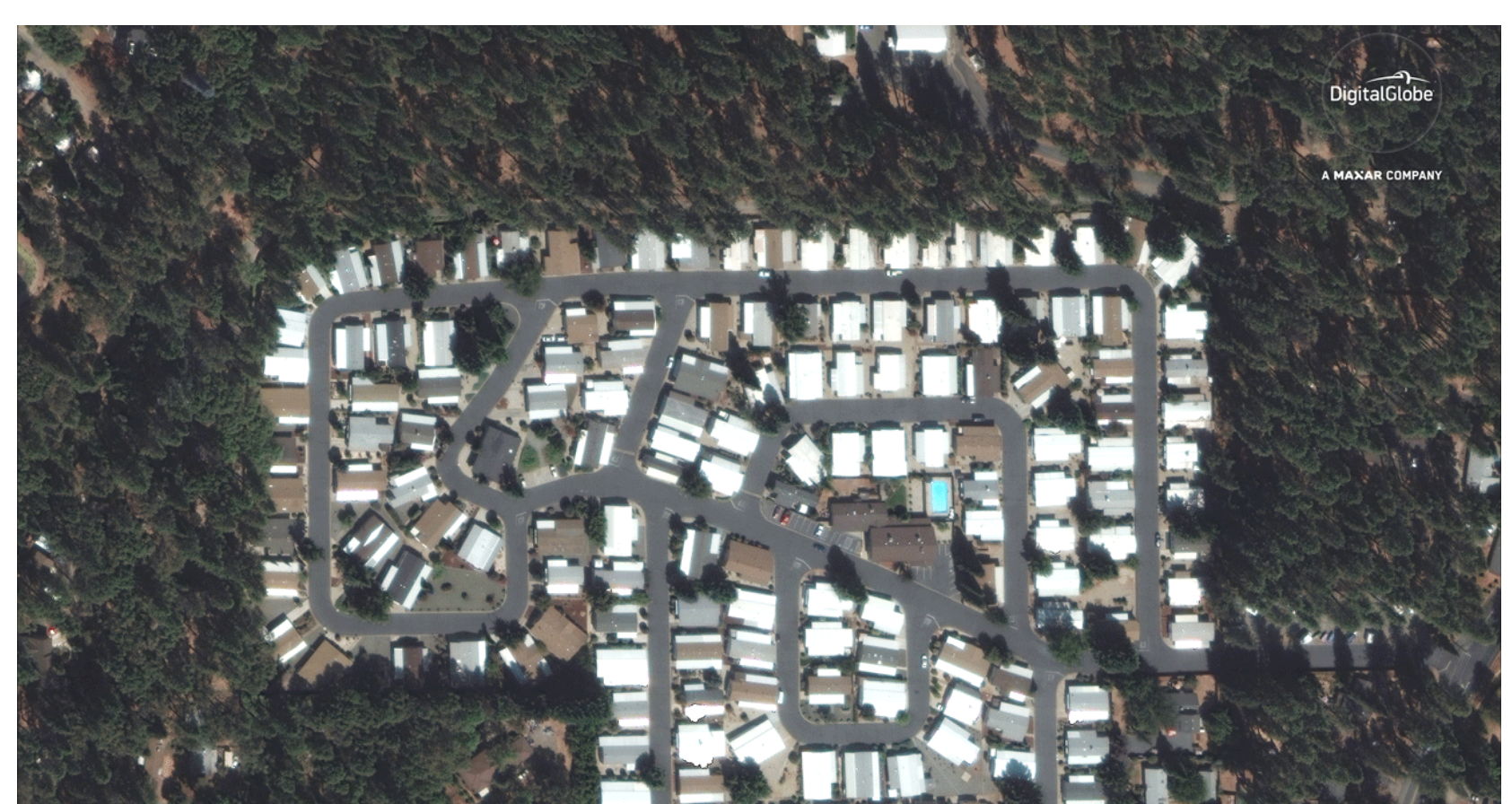 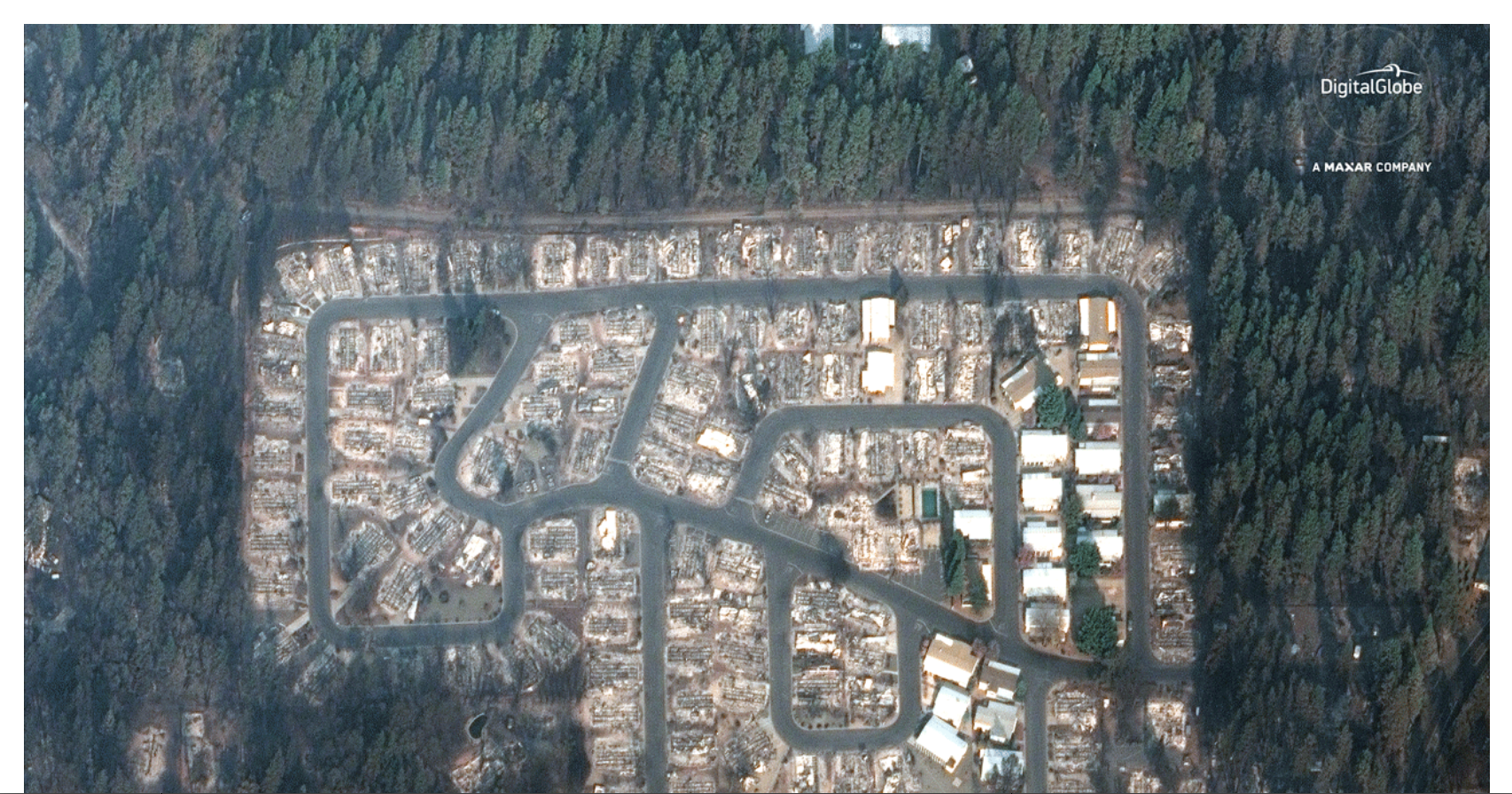 The same Paradise neighborhood after the fire. More images: https://weather.com/news/news/2018-11-19-camp-fire-california-damage-images-gifs

If you would like to help bring warmth to those in need in Paradise and surrounding areas, please call Decarli’s Propane (707/ 762-4511) and let them know you’d like to participate in Campaign Propane by purchasing a new 5 gal tank for $44.95 or a 7 gal tank for $91.85 They will fill the tanks with propane for free.

If you are interested in attending this Crab Feed or supporting the efforts by the Yacht Club and Dominic’s CLICK HERE.