The South San Francisco Police Department is working with law enforcement agencies across the state to promote safe behaviors that allow drivers and those on foot to get where they need to go safely.

In order to reduce the number of collisions involving pedestrians, the South San Francisco Police Department will have additional officers on patrol at various times during the month of September specifically focused on drivers and pedestrians who violate traffic laws that increase the risk of crashes. These violations include speeding, driving or walking distracted and/or impaired, failing to stop for signs and signals, and not yielding to drivers/pedestrians who have the right of way.

“Someone crossing the street should not have to fear for one’s life, but they should also be mindful that drivers are going places too,” Traffic Master Sergeant Danny Gil said, “It goes both ways.”

Despite advancements in vehicle technology that increase the chance of survival for drivers and passengers in crashes, pedestrians face the same amount of risk of getting seriously injured or killed when struck by a vehicle.

“Sooner or later, a driver has to get out oftheir car and walk, so we are all pedestrians at some point,” Master Sergeant Gil said.

“Think about how you would want a driver to act when you are walking, and vice versa. Keep that in mind and follow the rules of the road so we can all arrive where we’re headed safely, regardless of how we get there.”

Funding for pedestrian safety enforcement is provided by a grant from the California Office of Traffic Safety, through the National Highway Traffic Safety Administration. 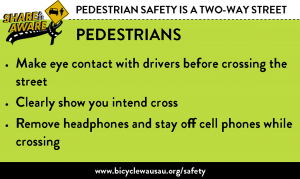 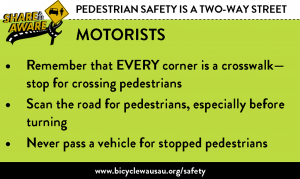