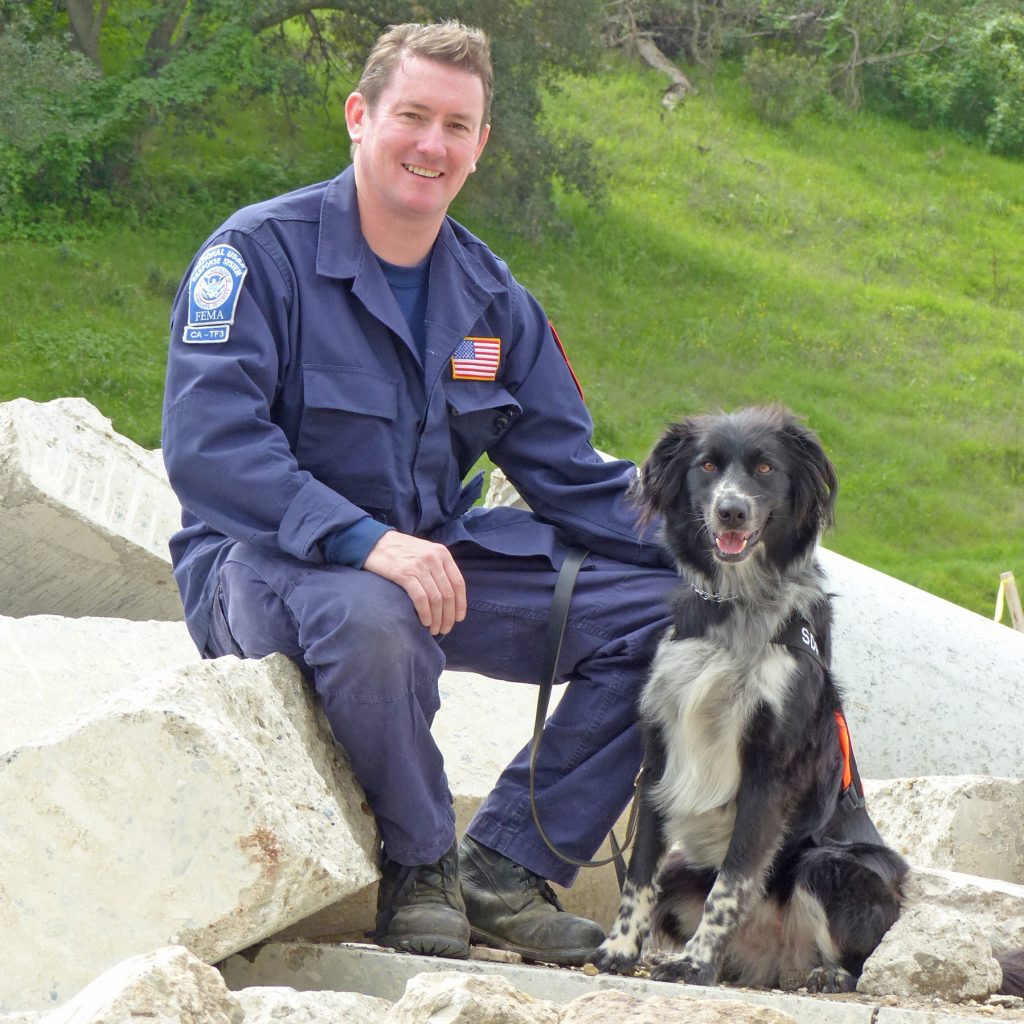 Originally named Addee Kiss, Allie was donated to SDF by her owner Kaelene of Clifton, CO when she realized this border collie was more than she could handle in a pet. Teri Thomas, who had helped us to recruit Search Dog Chief back in 2010, helped to evaluate and facilitate getting Allie to Santa Paula, California. “She never stopped moving, 5 minutes after waking up she would want to play all day long!” Teri told SDF staff.

She was re-named “Allie,” a name that was chosen by long-time SDF supporter Barbara Phelps. Over the years Barbara has been a Guardian to three SDF search dogs: Ana, Sandi and Chief. SDF wanted to thank Barbara for all she has done for our teams and honor her with the special gift of a canine naming.

Since her arrival, Allie progressed quickly through the training program and weekly reports from the trainers were beaming! “She continues to improve very well each day. She sure has lots of energy and is starting to really sail over the rubble while searching!” She hit a little stumbling block several months into training and seemed to lose interest in the search game, but after testing several types of toys made of different materials, Allie went wild for a faux sheepskin toy. Of course, it makes sense that a Border Collie would! Now, special toys are handcrafted and sewn just for Allie to keep her job as a Search Dog the most exciting game of hide and seek on the planet!

Allie graduated from SDF’s training program on February 28, 2015, when she was partnered with Fire Safety Inspector Tom Carney of the South San Francisco Fire Department. Tom is a veteran SDF handler and he and Allie achieved Federal Emergency Management Agency (FEMA) Certification in March of 2016.

Tom and Allie deployed together for the first time when Hurricane Irma struck Florida and the Virgin Islands, causing widespread destruction and taking 134 lives. It was the strongest hurricane to make landfall in the U.S. since Katrina in 2005, and FEMA sent in many teams from all over the country to assist citizens.

They went out the door a second time when a cliff collapsed at a San Francisco area beach. At least one person was suspected to be trapped under the debris and upon arrival at the scene, Allie searched immediately for the woman with teammate Vader. Unfortunately, the woman had passed away under the collapse and there was nothing that could be done—a sad reality of working in search and rescue.

Now, Tom and Allie head east to wait for Hurricane Dorian to pass and help people there. Our hearts go out to those being affected by this current catastrophe, but we know that Tom and Allie are ready to bring as many people to safety as possible!

The team has kept their skills finely tuned with plenty of training and enjoy educating the public about canine search and rescue at events in and around San Francisco. We appreciate that all Tom and Allie already do for Bay Area residents, their community, and their country!

To learn more about the Search Dog Foundation CLICK HERE

[…] ceremony. He knows firsthand the devasting impact the loss of life has upon families. Tom, as a member of the  California Task Force 3 (CA-TF3), has responded to 10 search and rescue missions with his certified trained search dogs, Gypsy and […]