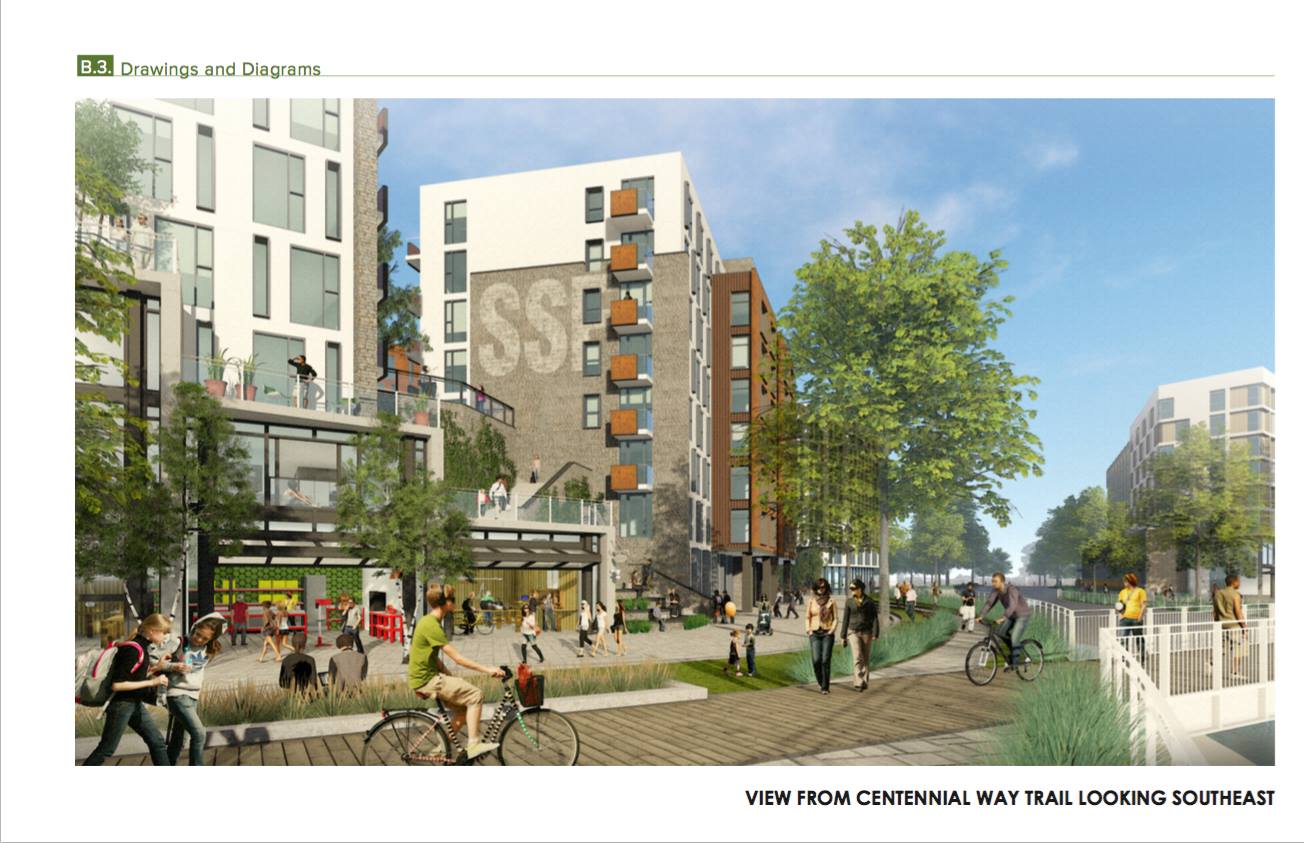 ‘Sun Killers can NOT be allowed in our family residential neighborhoods. NO to high rises in Sunshine Gardens!’ neighbors exclaim

South City neighbors felt heard, and vindicated, last May after they showed up en masse to protest the proposed development for the Sunshine Gardens neighborhood, on Mission Road. At that time, City planners were looking at 8-12-story high rises, for what is known as the PUC property located across from the Court House, and during that May 2018 Council meeting, Mayor Normandy instructed the developers, AGI/KASA, to pursue 3-5-stories tapering back from Mission Road. (VIDEO HERE) {PETITION HERE}

Neighbors felt blindsided when meetings conducted this year did not reflect the lower heights and density, leading them to believe our elected officials are not acting in the interest of those who have voiced their opinions, and who were assured this development was being reduced.

Neighbors continued to ask when was the meeting to be held where the actual heights and density were to be discussed, yet that opportunity has never presented itself.  However, the City did make note when that was NOT the discourse to take place, evident by this outreach from City Hall. 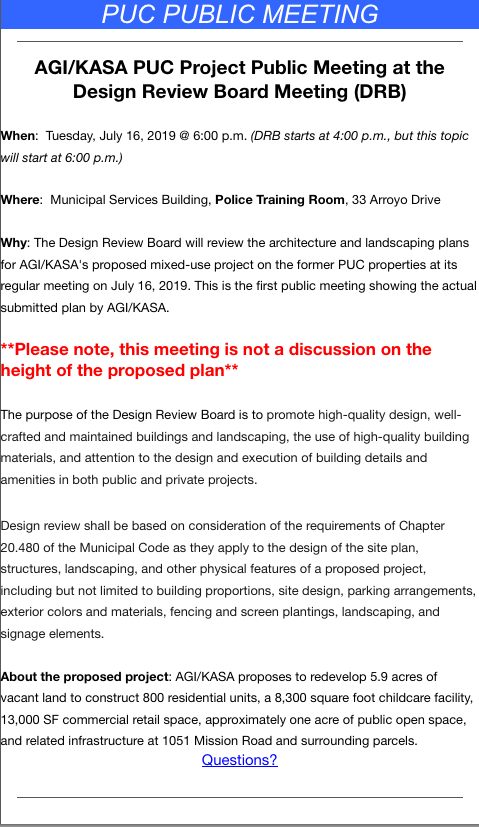 While most neighbors recognize more housing is sorely needed, they do not agree this is the location for this height and size, and question why 1500 units of housing were defeated by the biotech in the areas east of Hwy 101. Residents also recognize that adding more employment opportunities in South San Francisco only adds to the housing crisis, which not only impacts South City, but neighboring cities as well.

A bigger question that is asked: who are our elected officials serving? Residents that voted them into office? Or biotech businesses? Why ask residents input on the future of our City when their views are not taken into consideration? Why have an acting Mayor’s instruction, that was approved by all on the dais in May, not followed? {read May 2018 petition HERE and current comments regarding proposed Camaritas hotel HERE}

Everything South City has once again been asked to bring about a fuller conversation, in hopes our elected officials hear their voices, because a time and place has not been created for this conversation. As this huge PUC development is now on the Wed November 13, 2019 agenda, with the resolutions ready to be signed, neighbors demand to be heard.

This survey is for them, not for outsiders, but for South City residents only, those who vote, and expect their elected officials to act in accordance with that direction.

And while we do understand there are some within our community that are in favor of this high density, high rises in this neighborhood, we respect their voices as well.

PLEASE ONE RESPONSE ONLY!!

INFO FROM THE SURVEY PREFACE READS BELOW:

This survey is for South San Francisco residents ONLY.

The proposed developer, AGI/KASA, and hired Co-Urbanize, have worked tirelessly to secure outside opinions on this massive 800+ unit project in the Sunshine Gardens neighborhood.

Our local elected officials have been accused of not allowing their neighbors to discuss this openly with them, or upholding Former Mayor Normandy’s direction from the dais May 2018. (3-5-stories tapered back)

Therefore, we are reserving this survey for South City residents only, allowing them to voice their opinions, in hopes elected officials will take all voices into consideration.

Councilmembers Garbarino and Nagales will be seeking re-election in 2020

THIS PUC DEVELOPMENT IS ON THE AGENDA FOR THE WED NOV 13TH COUNCIL MEETING 7pm at the MSB 33 Arroyo Drive.
BE THERE to ensure YOUR voice is heard!
CLICK HERE for agenda and staff reports for the Nov 13th meeting
If you are a South City neighbor in favor of these high density developments, your input is wanted and respected as well, so please respond!
###
Developments in this area:
PUC: 800+ units x 2 cars
1600+ more cars in that area- where will they park?

How will we navigate that intersection, that is congested now?

Proposed Civic Center with PD, FD, Library, Park/Rec, etc
Proposed 6-story hotel a block away on Camaritas (Buri Liquor/ Noodle)
Approved 5-story, 91 room hotel at Arby’s location (840 ECR)
See City website for construction projects CLICK HERE  Check out the large number of high density developments that are being planned, towering over what South City residents have come to know as normal.
Results of this survey will be made available to our elected officials yet does NOT substitute communications from you directly to them.
Contact YOUR City Council email CLICK HERE
Call Ph: 650-829-6601
Attend Wed Nov 13th Council Mtg

Everything South City was created ten years ago, and as the founder and editor, I work extremely hard to keep my voice off this platform, allowing it to be a voice for residents, by residents.

However, on what I personally see as over development gone bad in South City, I support this survey that was created by questions gleaned by residents, and efforts to ensure our elected officials hear what appears to be ignored. In a City that has known 1,2, and 3-story buildings the norm, 6-8-stories ARE highrises, if even the verbiage being used today is ‘mid-rise’.

It does not fit on the PUC site.

Hi, what was the outcome of this survey? thanks!

As it is the traffic in this area is out of hand. I have lived here for over 50 years and the people and parking and traffic is unbelievable.
It use to be when you got up in the morning to go shopping it was a pleasure. Now no matter what time you start out it doesn’t matter, it’s always congested .
So needless to say, I’m against HIGH RISES.

As a SSF resident of nearly 50 years, I’m extremely saddened disappointed by the events that are happening and/or have happened during the past 10-15 years. Housing for the low income and elderly are understandable. However, Luxury apartments and condos that are priced at such exorbitant rates are ridiculous!!!! Entire generations of South San Franciscans are relocating because their children and grandchildren can no longer afford to live in this City.Instead, you the members of the city council and planning commission are approving and catering to a transient, high level income earners and creating a TRAFFIC NIGHTMARE! As a result the tranquil hometown atmosphere of SSF is disappearing, and now HIGH RISE HOTELS? Whose interests are you protecting? the residents of SSF or yours? My personal opinion is that you people have been on the City council too long and the people of SSF need to awaken and vote the lot of you out of office! Most of the city planners are not SSF residents and do not have welfare of the South San Franciscans.