I just got this in the mail and it makes me mad!

Why are Mayor Garbarino and Councilmembers (Matsumoto, Nagales, Nicolas) endorsing ********** Senator Scott Wiener when Wiener is the one that wants to take power away from local governments on housing? They keep saying Sacramento is the ‘boogeyman’ the one that is forcing all this development on our City, that they are in a State strangle hold, and then endorse this same person for Senate? What is wrong with this picture? Is there a pay off?

Didn’t Wiener just spent tax dollars and waste time trying to get his over reaching SB50 passed? I don’t like what Wiener is doing to our State, and what he is trying to do to our City, and with our elected officials permission and support!

Wiener is up for reelection now, but I think terms are over for the Mayor and the Westborough but I don’t know who is in what district with this new voting thing. Who is on the November ballot? Does anyone know? We need term limits, how do we get them? We need to remember not to vote for people who think like Wiener does, who want state government taking over our City and our building.

I don’t want an apartment building next to my home like what they are forcing on people in Sunshine Gardens, no required parking, houses remade into apartments or condos. It’s bad enough they are now talking about putting in a ’boutique hotel’ a block from me! They say the represent us but then endorse someone who does not represent what residents of So SF want, no one wants his BS or SBs! 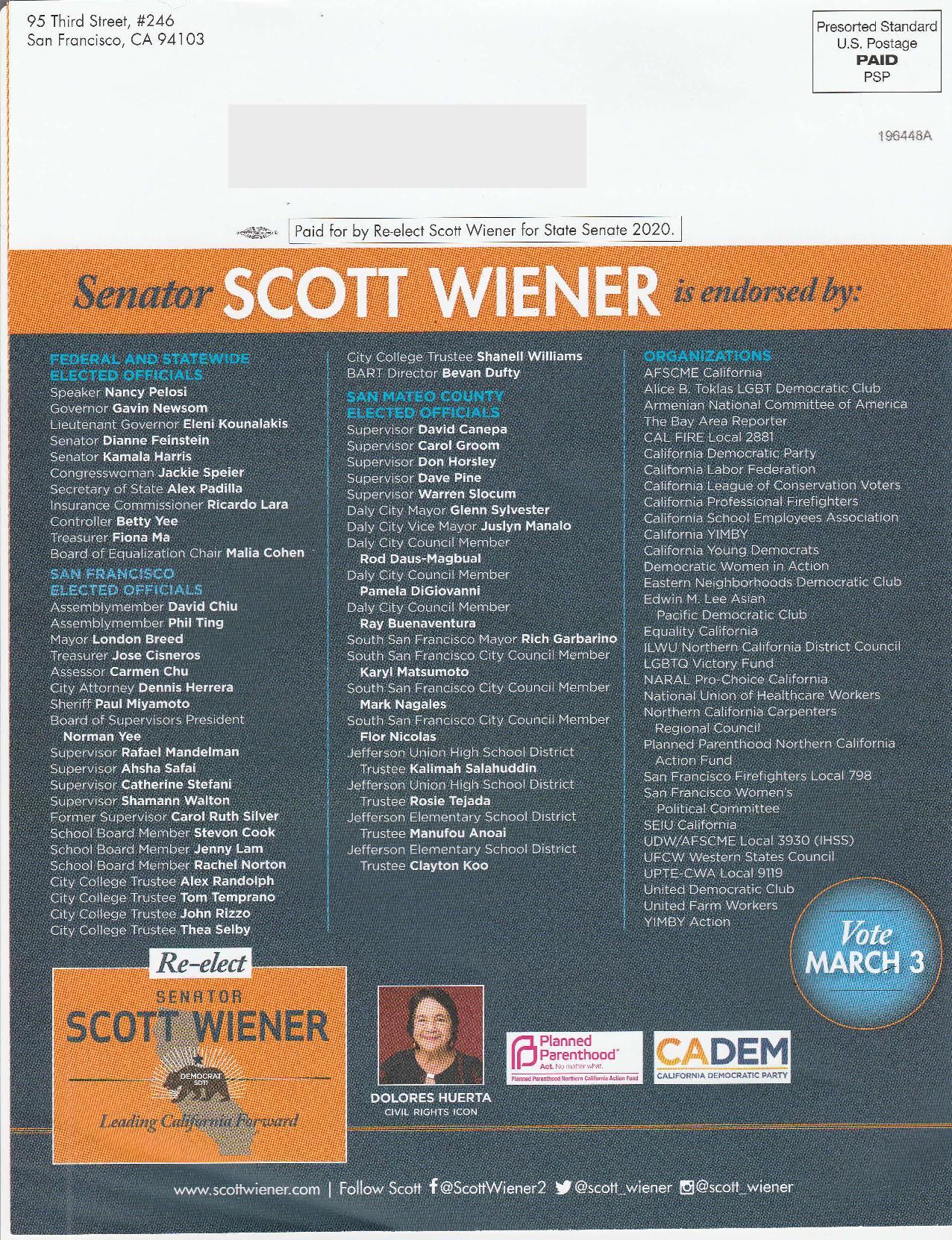 To read more about local views of SB50 Click HERE

Excellent job Steve Watson. In my opinion, the simple fact is that the SSF City Council has betrayed the community they were elected to represent. As an example, if you attended, watched on video or are just aware of the “crocodile tears” shed by council members at the meeting to vote to approve the PUC project, you would have seen their true colors. They tried to hide their votes of approval behind potential litigation from the developer if they denied the project as configured. They rolled out both Half Moon Bay’s land use lawsuit and a San Bruno project developer’s threatened litigation as examples even though these two actions are different and irrelevant to the situation our city faced with the developer of the PUC project. They also relied on their favorite “go to,” SB 50. They claim to be responding to a piece of legislation that may never see the light of day as those who endorse it fear finding themselves in possession of an express ticket out of office. To be clear, the threat of litigation to our city on the PUC project was very real as denying the developer’s plans that met with all the requirements of the involved joint agencies would be an open invitation to a court battle. What may not be so clear, is where this threat originated. The council voted to accept AGI/KASA as the developer/partner on the PUC project knowing that they had no intention of working within the guidelines proposed and accepted by the community and the last city administration. Four to five stories in height and approximately four hundred fifty units. One council member even snickered that the agreement with the community was not in writing. If you attended any of the project meetings, you would already know that there was no interactive discussion of heights and densities but plenty of discussion about what vegetation to plant and bocce` ball courts. “Window dressing,” nothing more.

For well over a year, I have repeatedly asked both salaried and elected high officials what I refer to as “the question.” Would a PUC project reflecting no more than four-five stories and four hundred fifty units have satisfied all parties concerned? To date, I have received no answer. That being the case, I will assume the answer is “yes” and therefore any exposure to potential litigation from denying this developer’s plans originated with the council’s vote to choose this developer rather than search for a developer who would work with the community. I think the blame is clear, the betrayal even more so. Just look around your city and the actions of our council are plain to see and supporting Wiener seems a “good fit” for this handful of non-representatives who seem to not value the history or character of our city. It appears that they intend to continue to sell our city block by block. As working with the community would seem to be the “course of least resistance,” ask yourself why they ignore us and capitulate to the will of the developers? On this, their motives remain unclear. Let your “inner voice” help you answer that question.

it’s all politics (follow the money) they all
should be voted out of office, drain the
ssf swamp once and for all