– The South San Francisco Police Department will have additional officers on patrol on Saturday August 15th specifically looking for drivers suspected of being under the influence of alcohol and/or drugs. DUI patrols will be throughout South San Francisco during the evening and overnight hours. In addition, the Police Department will hold a DUI/driver’s license checkpoint the same night at an undisclosed location.

DUI checkpoints and patrols are done in locations with a history of DUI-related collisions and arrests. During the checkpoint, officers will be looking for signs of alcohol and/or drug impairment, with officers checking drivers for proper licensing.

In 2018, 1,069 people were killed on California roads in crashes involving drivers who had a blood alcohol content over the legal limit (.08 or above). Since the beginning of 2019 to date, the South San Francisco Police Department has investigated 82 DUI collisions that injured 42 people.

The South San Francisco Police Department reminds the public that impaired driving is not just from alcohol. Prescription or over-the-counter medications with an operating heavy machinery warning on the label can also impair. While medicinal and recreational marijuana are legal, driving under the influence of marijuana is illegal. 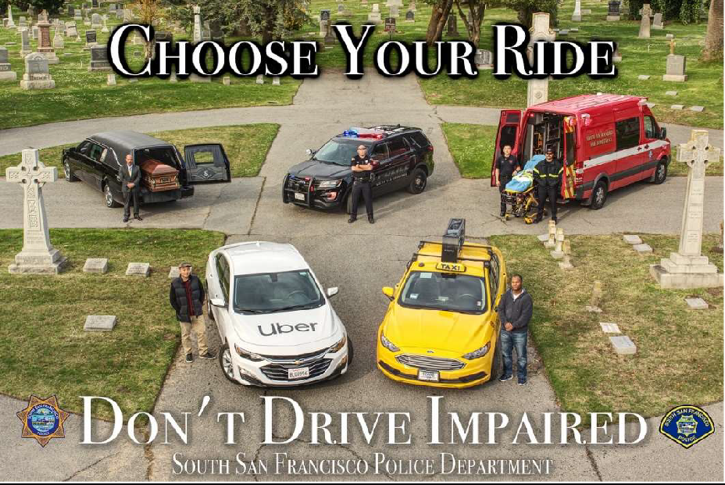 If you plan on drinking or are taking medications that can affect your ability to drive, please take these precautions to avoid a DUI:

A DUI charge is not cheap.

Drivers charged with DUI face an average of $13,500 in fines and penalties, as well as a suspended license and possible jail time.

Funding for this program was provided by a grant from the California Office of Traffic Safety, through the National Highway Traffic Safety Administration.