SACRAMENTO, Calif., March 22, 2021 /PRNewswire/ — While the Joint Committee on Rules held a closed-door session preceding an informational hearing to discuss the controversial Capitol Annex Project, preservation, environmental, and business organizations held a news conference on the steps of the Capitol to demand a stop to the demolition. During a time when the majority of legislative and governor’s office staff are working from home and California families and businesses continue to suffer from the fallout of COVID-19, the California Legislature is prioritizing its self-interest over the needs of struggling Californians by moving forward with a fiscally and environmentally irresponsible expansion. Save Our Capitol! and Public Accountability for Our Capitol are urging the governor and legislative leadership to stop the demolition and to restore the historic Capitol Annex through a transparent process as required by law.

“The Capitol Annex is in need of upgrades and repairs, but the California Legislature’s Joint Committee on Rules – which is in charge of maintaining the building – has put off making those upgrades and repairs for nearly seventy years,” said Dan Visnich, former Senate Owner’s Representative, Capitol Restoration Project, and current Executive Secretary of the California Capitol Historic Preservation Society. “Intentional neglect by the Legislature should be addressed by restoring the nationally registered East Annex building to ensure the safety of our elected officials and legislative staff. Destroying the Golden State’s history is not a solution.”

The billion-dollar taxpayer-funded boondoggle has not been scrutinized by any fiscal or budget committee, and the cost has more than doubled in less than two years. The project will drastically reshape the historic Capitol and surrounding grounds by destroying more than 100 trees to expand the private underground parking garage and construct an obstructive visitor center, which will block access to the Capitol’s West Steps and Plaza, the historic gathering place for the public to petition the government for redress of grievances. In addition, the Historic State Capitol Commission, required by law to review and advise the Legislature on any changes to the Capitol, was denied information and kept out of the development process. As a result, two commissioners resigned in protest of being prevented from performing their lawful duties. Additionally, in public comments, tribal communities have raised concerns that the preservation of their cultural heritage has not been adequately addressed as required by law.

“Considering the project’s environmental and historic impact, it’s unfortunate that the Joint Committee on Rules will not allow a qualified preservation architect to draft a rendering that meets the Legislature’s needs while preserving the Annex and surrounding Park,” said Richard Cowan, former chair of the Historic State Capitol Commission. “With competing needs for taxpayer money and the lack of public input, I cannot understand why the Committee plans to spend more money to demolish-and-rebuild this historic building rather than to renovate it instead.” 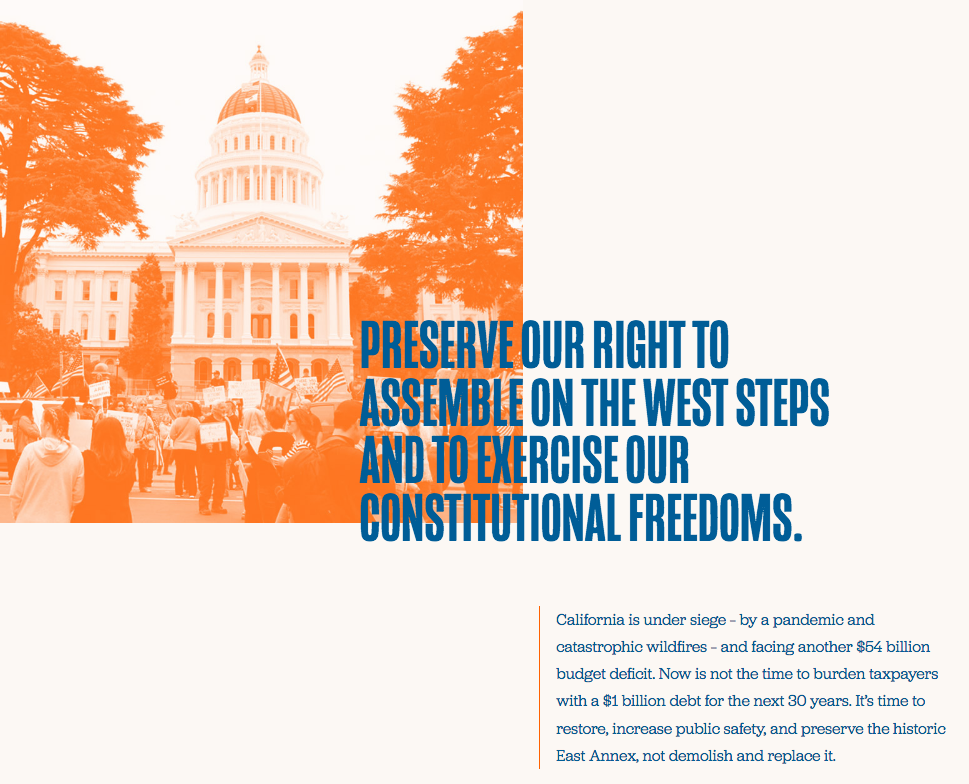 Solutions advanced by Public Accountability for Our Capitol include:

About Save Our Capitol!

Save Our Capitol! is dedicated to preserving the historic Capitol and its surrounding Park as the center and symbol of Californians’ right to truth, transparency, and trust in our form of self-governance. Follow Save Our Capitol! on Twitter and learn more by visiting www.SaveOurCapitol.org.

About Public Accountability for Our Capitol Public Accountability for Our Capitol is a coalition of nonprofit organizations and advocates with expertise in historic preservation, legislative advocacy, and environmental issues, working together to protect and preserve our State Capitol and its surrounding Park. Learn more by visiting www.SaveCalCap.org.

SOURCE Save Our Capitol!

**gotta luv the politicians, remember YOU
voted for these clowns

gotta luv the politicians, remember YOU
voted for these clowns