It was an early morning call on March 28, 1981, when South San Francisco Police Officers Bob Wilson and Bill Carter responded to a hit and run call on the 400 block of East Grand Avenue that would change their lives forever.
Upon Officer Wilson’s arrival, he was ambushed by an armed man with a shotgun. “Officer Wilson was shot in the face, arm, and other parts of his body, as was his K-9 partner,” said current South San Francisco Police Chief Jeff Azzopardi. Officer Carter arrived on the scene and was also shot from behind in his arm. Officer Carter was able to drive himself out of the area and seek medical treatment while another officer, Sergeant Mike Devan rescued Officer Wilson from additional harm. The suspect was caught in the case and spent the rest of his life in prison. 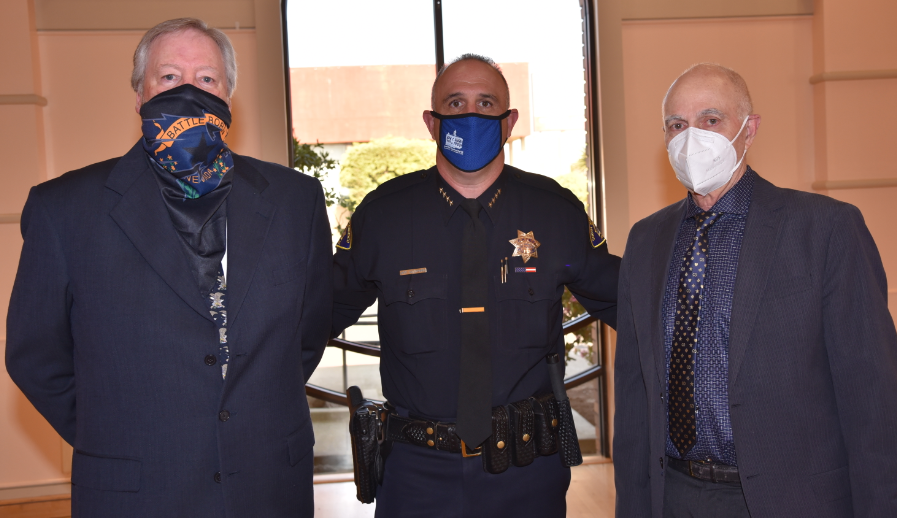 Today, Chief Azzopardi honored the former officers with the Purple Heart, an honor not available back in 1981. “Forty years ago, the South San Francisco Police Department didn’t have a policy for receiving the Purple Heart award, and when the department enacted the policy, Officers Carter and Wilson were not retroactively presented with the award,” said Chief Jeff Azzopardi. “Today was our chance to bestow upon these officers this honor, which was far overdue.”
The Purple Heart is a law enforcement medal that may be issued to any law enforcement officer who is injured, wounded, or killed in the line of duty. The term is based on the Purple Heart medal issued by the United States Armed Forces. The South San Francisco Police Department (SSFPD) has only issued five Purple Hearts, which includes the two issued today.
Chief Azzopardi held a small socially-distanced ceremony to honor Officers Carter and Wilson, who were both in attendance with their families. Officer Carter achieved the rank of Sergeant with the SSFPD before retiring, as well as served in the United States Army for 30 years. Officer Wilson also achieved the rank of Sergeant before retiring.
“Giving recognition allows for closure of a tragic event that happened 40 years ago, and as Police Chief, it also provides closure for me knowing these men have finally been honored and recognized for their bravery and courage,” added Chief Azzopardi.
###
COMMENTS:

GLAD THEY SURVIVED, let this be a
lesson to all of us, the bleeding heart,
left wing loonies, want to make it
easier for criminals to be criminals and
NOT BE HELD ACCOUNTABLE
-Mel Perry

GLAD THEY SURVIVED, let this be a
lesson to all of us, the bleeding heart,
left wing loonies, want to make it
easier for criminals to be criminals and
NOT BE HELD ACCOUNTABLE