The San Mateo County Harbor District held a special meeting and site tour at the Oyster Point Marina on Thursday, March 4th and it seems few changes have been made to the Marina itself since the last site tour in August of 2019. What was very clear though, is that dramatic changes have come to the adjacent lands in the form of a colossal development that is now well underway. Once probably  SSF’s only park-like setting fronting the Bay, it is now the site of a  huge development being constructed that will seemingly dwarf the Marina and the somewhat bucolic setting that once surrounded it. 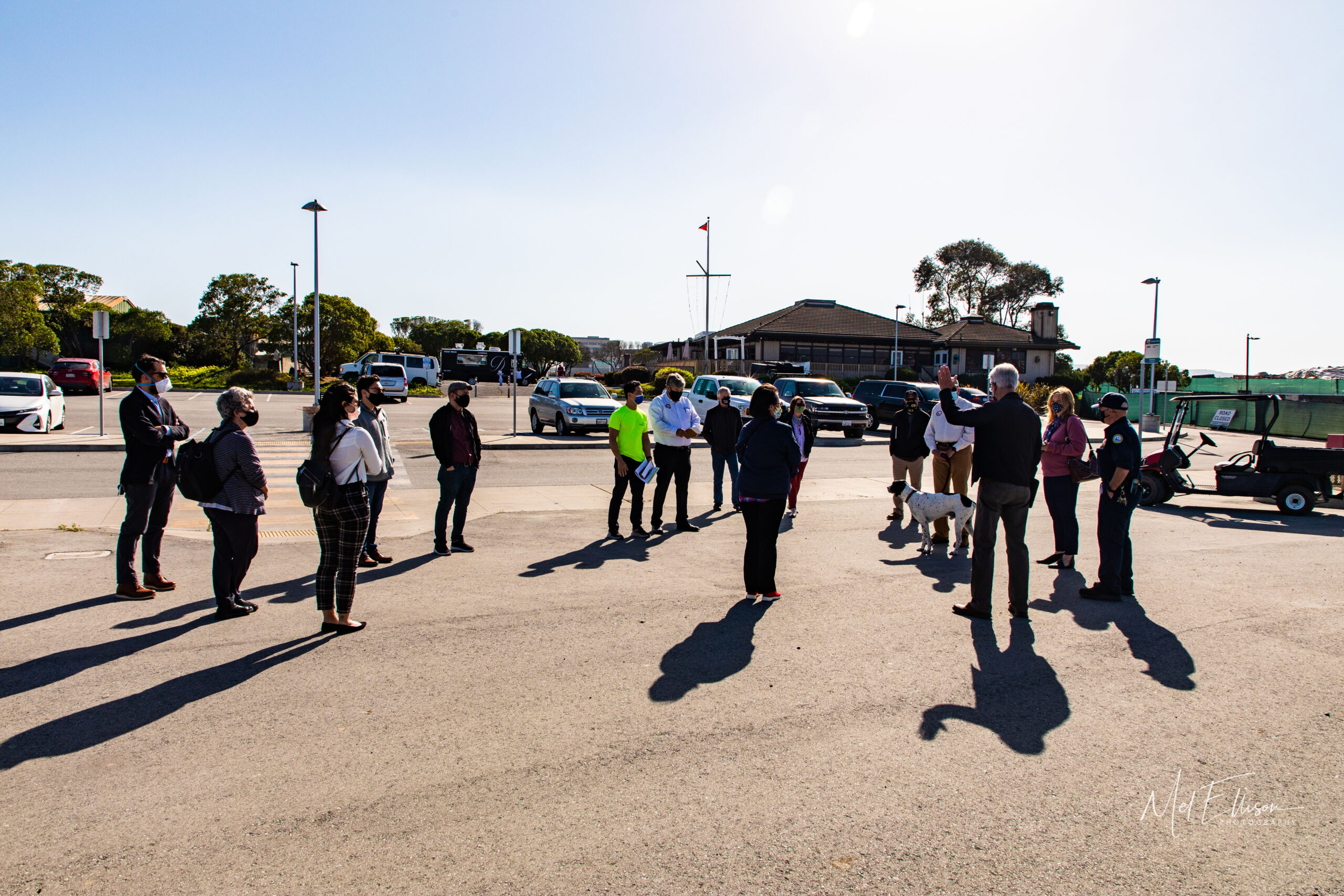 After welcoming remarks by president Kiraly, she introduced our guide for the site tour, SMC Harbor District GM Jim Pruett. Jim is a big man with the booming voice and the commanding presence of the US Coast Guard Captain that he was before taking the Harbor District’s GM position in December of 2019. As he leads us to the East Basin docks, the small boat launch ramp, and other areas, one thing became immediately apparent from his remarks: that the King tides…or high tides over 7 plus feet which occur around four times a year…flood the existing docks, launch ramp and other facilities including the Harbormaster shack and it’s approaching road. Also apparent was that some of the aging docks would need replacement. These were all issues on the last site tour in 2019, but now it seems a plan has been devised and the East Basin’s docks 12, 13, and 14 are slated to be replaced with concrete docks this year, while the West Basin’s docks 1 through 6 will be replaced with concrete in 2022. Also slated to be replaced are the Marina approach ramps to the West Basin to accommodate the rising sea levels and King tides, although a completion date for these new approaches has yet to be decided and are tied to the new developments occurring to the surrounding infrastructure.

Continuing the tour, Pruett leads us past the temporary boat owner’s parking lot and down a long, winding temporary ramp towards the West Basin docks. At this point, it was difficult not to notice the size and scale of the new development just adjacent to this side of the Marina. Although most of the new high-rise buildings haven’t even started construction yet, the grading of the land adjacent to the West Marina due to rising tides and construction, appeared startlingly high. After some four years of this ongoing grading, the land level has been raised some 40 to 50 feet in places opposite the West Basin. Up on the top of this graded area is where the new Bay Trail and other new construction will be located. 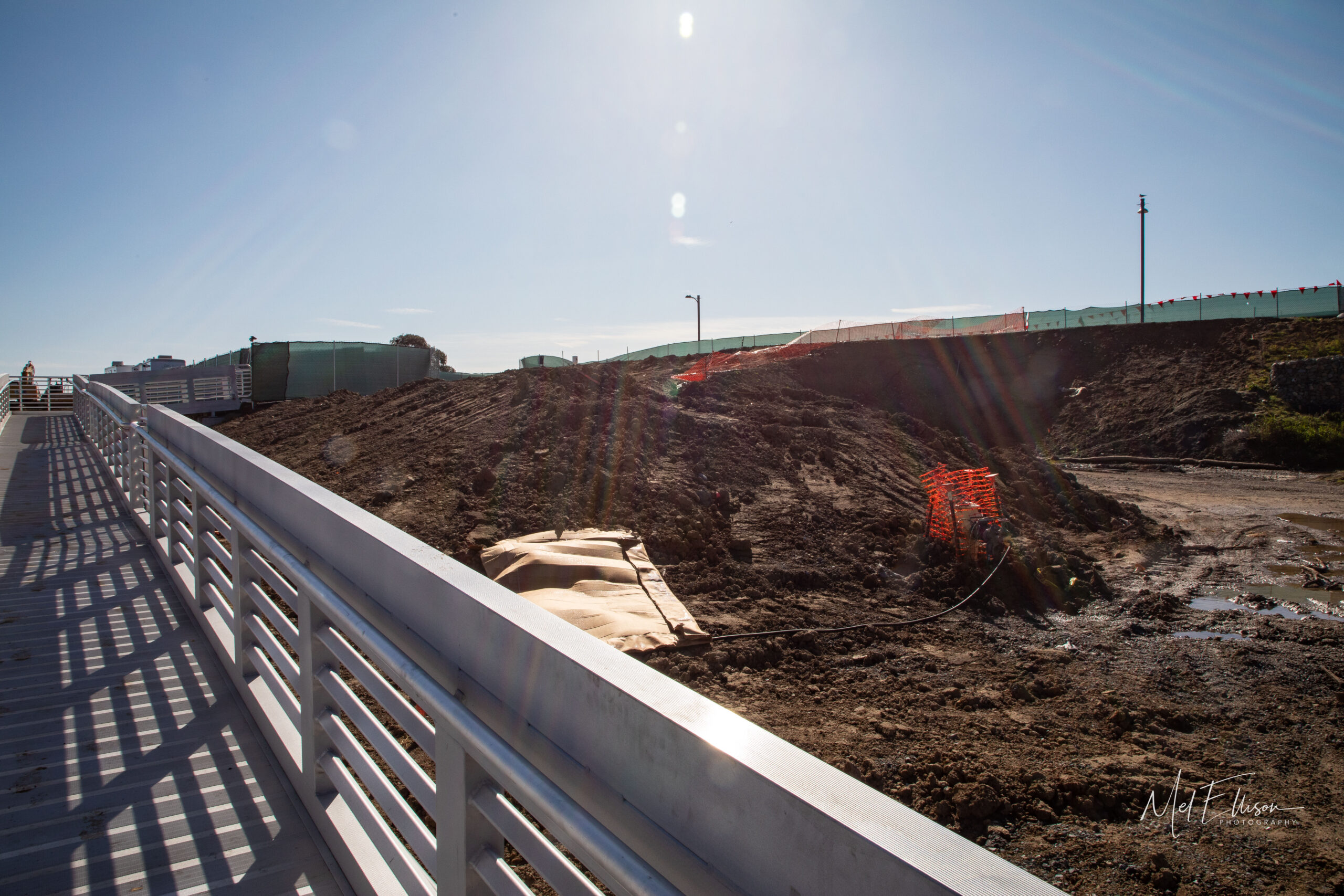 The view from near the West Basin docks back up the temporary access ramp. The height of the new graded surface to the right.

When we later emailed SSF City Manager  Futrell about the funding of the repairs and improvements underway to the Oyster Point Marina, he answered that they are covered in the Harbor District’s Budget. This wasn’t always the case as then Harbor District president Brennan presided over a proposed budget cut from $2,107,500 in Fiscal Year 2018-19 to $37,800 in FY 2019-20. Then- president Brennan’s reasoning at the time was that so much public land had been ceded or sold to the developers that they should be responsible for the improvements to the West Basin including the new ramp access. The funding has since been restored and all the improvements to the West Basin are now the responsibility of the Harbor District and the County taxpayers. However, funding for the new access ramps is, according to GM Jim Pruett, “…still an issue.”

It’s also worth noting that the Oyster Point Marina fuel dock had to be removed due to it not meeting current environmental standards.  Sadly there are no plans to replace it which is a huge loss to the boating public as the nearest fuel dock is now over 5 nautical miles to the south at Coyote Point Marina. 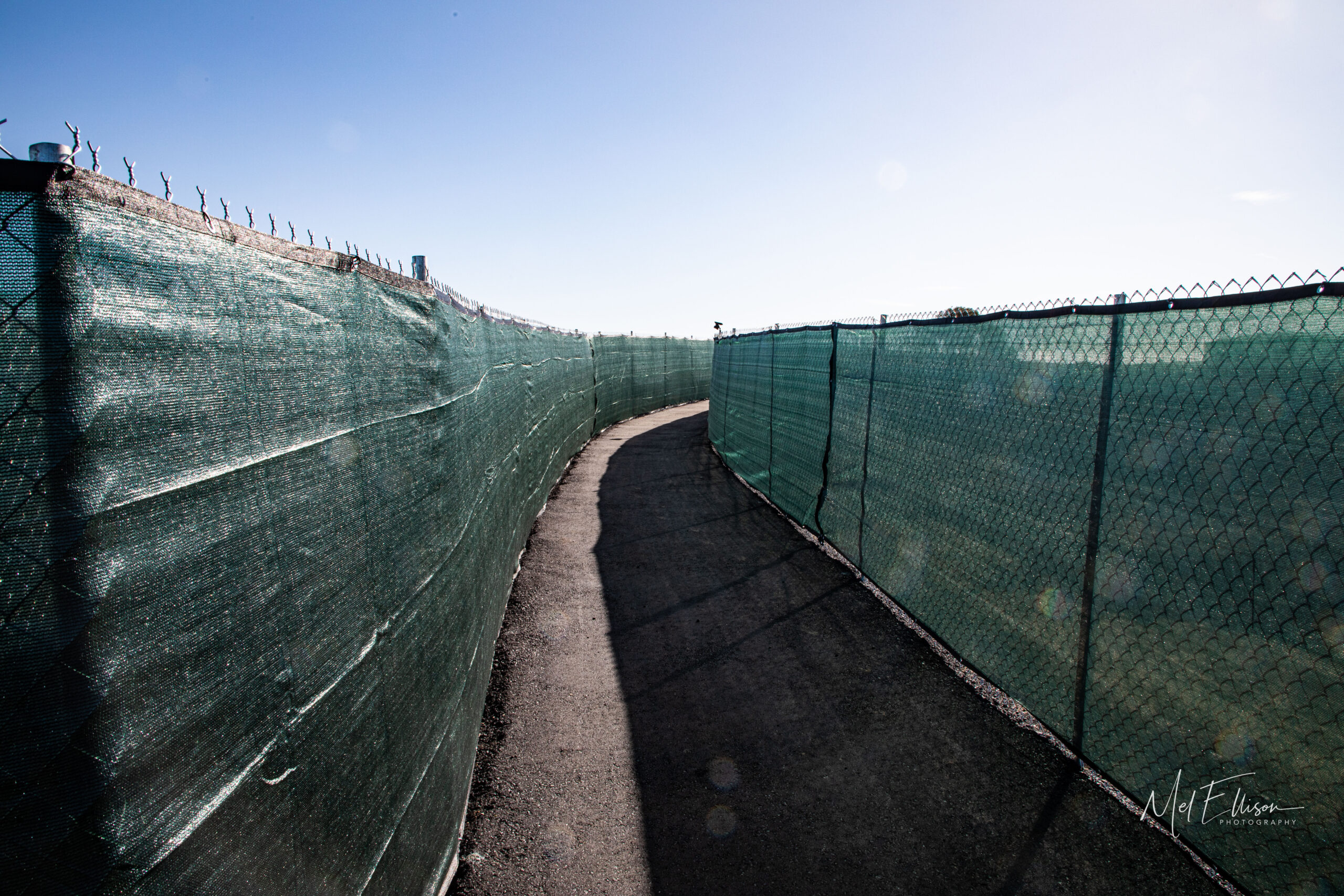 As for the size and scope of the development next to the Marina, Futrell was glowing as he described the improvements, saying that the developer is “…obligated to build new streets and utilities”, and to provide, “…grading and improvements to city-owned land, which the City will use as a public park…improvements to the Bay Trail, including protection against future sea rise; creation of a 3-acre waterfront open space, trees and landscaping.” Futrell went on to point out that the “…Oyster Point area is actually the old South San Francisco landfill, in operation as a public dump until the late 1960’s.” and that “…through decades of remediation work…an old dump [will be turned into] an environmentally remediated area for the public to enjoy with parks, a beach, walking trails, open space, and an operating Marina.”

Former SMC Harbor District President Brennan, in attendance as a “concerned citizen”, had an assessment of the new development and Marina improvements which differed substantially from Futrell’s. As we walked together near the end of the tour she said to me regarding the entire Oyster Point development, “The way this has been handled is such a disservice to the taxpayers, so egregious…..there has been such poor planning.” She went on to say that the developers didn’t plan for how to connect the new, much higher Coastal Trail to the docks below and it now falls on the Harbor District to figure out how to do it…and the taxpayers to pick up the costs. She said that “The public gave up a lot of space and SSF does not have that much property for recreation…especially waterfront property.” She felt strongly that there should be “…opportunities for SSF residents of all income levels to utilize the space.”

There was a time when setting aside large tracts of public land specifically for the public’s use was considered an honorable bequest of civic leaders. That’s why we have areas like Golden Gate Park in San Francisco for instance. Nowadays it seems that the goal of many officials is a legacy of huge buildings and the taxes they will bring to a city’s coffers…and for SSF in particular, the added cachet of being the “Bio Tech Center of the World”. 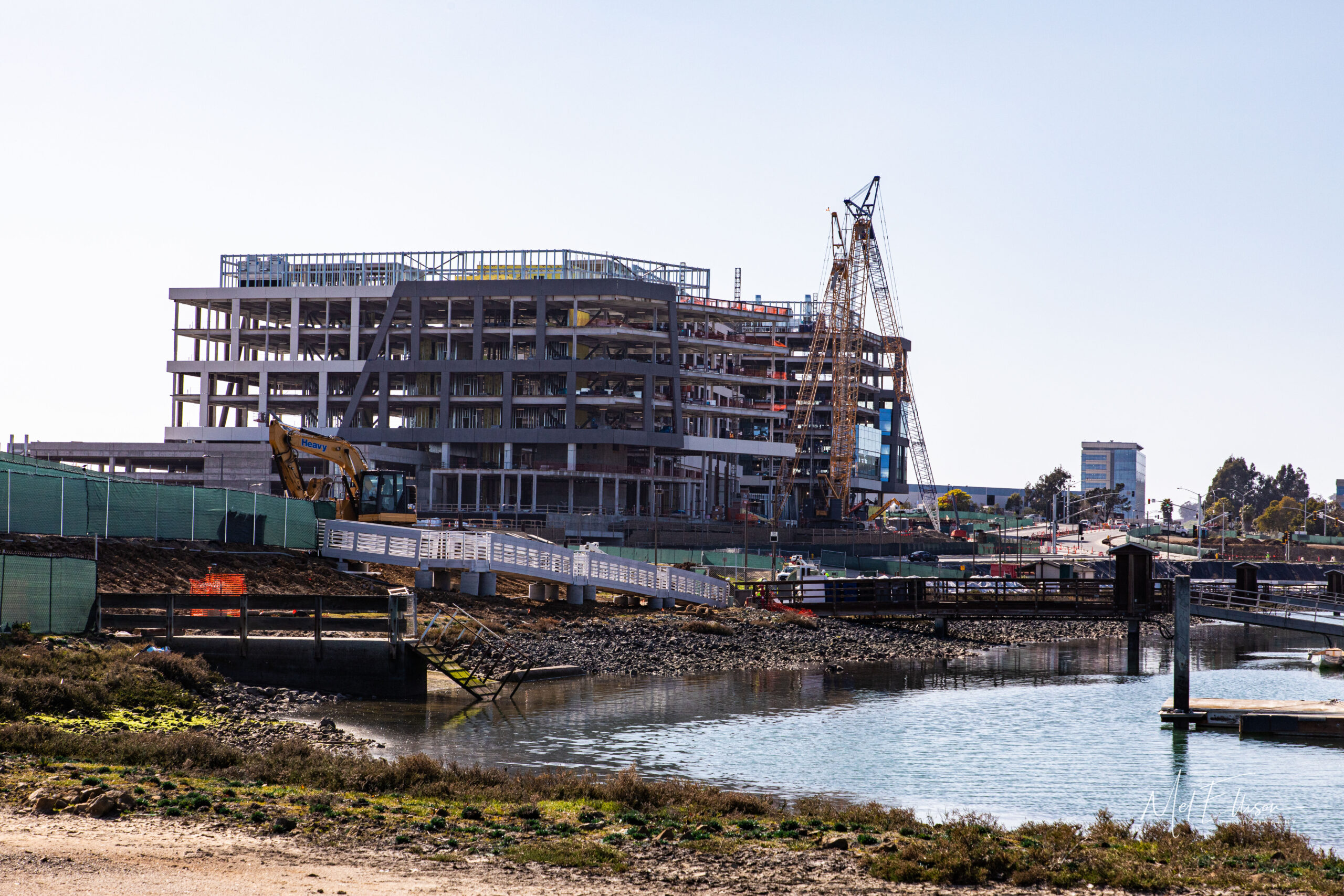 Pictured here is the new construction and part of the temporary ramp to the West Basin Docks. In the right center can be seen part of the new access roads

According to Futrell, when this is all completed, we will have both: a shiny new development as well as recreation areas for the public. It sounds good on paper, but as I stood down by the Oyster Point Marina West Basin and experienced first hand the size and scope of the nascent development taking place next door, I must say, I felt very small…very small indeed. 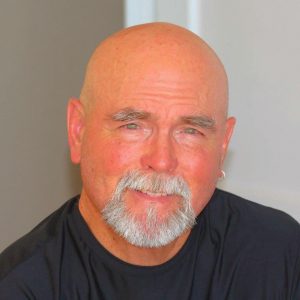 Mel Ellison is a free-lance writer and photographer who covers special features for Everything South City as well as taking the role of co-admin on our social media. Married to Lynn Brunetti, they enjoy family time with their grandchildren and enjoying their Brentwood neighborhood in South San Francisco. When not dazzling us with his photography you will find Mel on the open seas pursuing his love of sailing or creating music as he is also an accomplished musician.

**
Once again SSF “know it alls”, i.e. council AND MOSTLY Futrell, are giving all the public spaces away, plus building high rises that no one lives in. My Mom always (1937 graduate South City High), talked about going down to the “beach” at the Marina…I’m sure it’s been swept away by developers, again…never to be seen again. It’s a sad state of affairs when the “elected” officials don’t even listen to ANY of the comments from residents, “their” mind is already made up and to heck with the citizens. Good Luck

Once again SSF “know it alls”, i.e. council AND MOSTLY Futrell, are giving all the public spaces away, plus building high rises that no one lives in. My Mom always (1937 graduate South City High), talked about going down to the “beach” at the Marina…I’m sure it’s been swept away by developers, again…never to be seen again. It’s a sad state of affairs when the “elected” officials don’t even listen to ANY of the comments from residents, “their” mind is already made up and to heck with the citizens. Good Luck