On May 19, 2021, the San Mateo County Harbor District Board of Commissioners voted to support Eric Jones, the founder of Sea Valor, and Tarun and Sharmistha Pruthi, founders of the Arunay Foundation, to advance the permitting and installation of life-saving stations at four locations near Pillar Point Harbor in Half Moon Bay.

This winter alone, 12 lives were lost on Bay Area beaches from people being washed out to sea by large surf and unpredictable sneaker waves.

“Sneaker Waves are deadly, they come out of nowhere and catch you off guard. The immense energy of the wave washes you off your feet and drags you to sea. It is very difficult, if not impossible, to escape a sneaker wave on your own; you need help. The installation of the life-saving stations can supply the tools for others to save you, and the Harbor District is proud to be part of this initiative” stated Jim Pruett, General Manager, San Mateo County Harbor District. 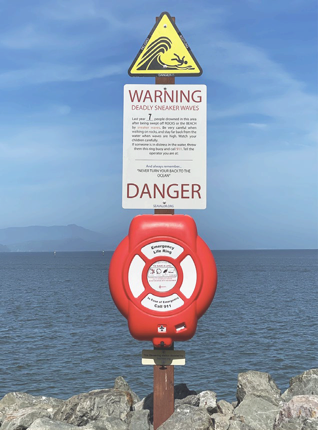 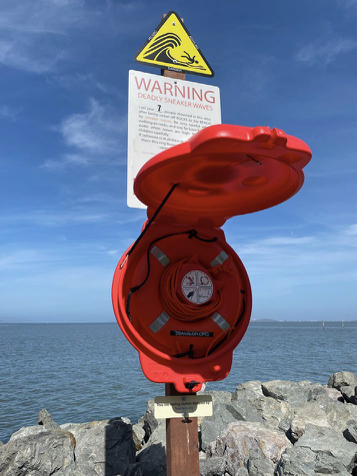 Each station is approximately eight feet tall and consists of improved signage in multiple languages that warns of the dangers of sneaker waves. Additionally, each station is equipped with a Glasdon life-ring buoy cabinet that holds a life-ring buoy and 100 feet of attached rope. The combination of improved signage paired with the life-ring buoys will undoubtedly improve safety awareness and will provide a much-needed means of rescue during the critical minutes before professional rescue resources arrive on scene.

“In talking with family members of those who have drowned from sneaker waves, two things became apparent. First, people simply did not understand what sneaker waves are and the danger they pose, and second, there needed to be something bystanders could have thrown to the person in the water to pull them back to safety. Our life-saving stations accomplish both of these goals and will hopefully help prevent such tragedies for other families” stated Eric Jones, Founder of Sea Valor.

The life-saving stations are being designed, built, and donated by Sea Valor and the Arunay Foundation, with the support and guidance from the San Mateo County Harbor District and San Mateo Sheriff’s Office. The initial four will serve as a pilot program which will hopefully expand to other areas along the California Coastline once the necessary permits are secured from the California Coastal Commission.

“We cannot say with certainty that a life-ring would have saved Arunay, but we feel it might have. People on the beach were trying to tie tents together to create a ‘rope’ that could be thrown to him. And if the new Sea Valor signs had been on the beach, we would have understood the danger and stayed off the beach that day” stated Tarun and Sharmistha Pruthi, Arunay’s parents.

“Turning a tragedy into a call to action, Sea Valor and the Arunay Foundation are working together with the Harbor District to bring awareness about Sneaker Waves and enhance coastside safety for everyone. This initiative was borne out of the love and grief of the Pruthi family and Eric Jones’ commitment to and passion for public safety, and the Harbor Board was proud to unanimously vote to support installing these life-saving stations. Safety is a high priority for the Harbor District. These life-saving stations and buoys need to be available along the entire San Mateo County Coast from Pacifica to Pigeon Point. The Harbor District is very excited to work with Sea Valor, the Arunay Foundation, the Sheriff’s Office, and the County to make this happen,” stated Virginia Chang Kiraly, President, San Mateo County Harbor District Board of Commissioners.

The first four lifesaving stations will be installed by the end of July 2021.