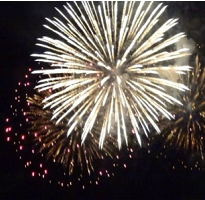 From the City of South San Francisco:

The risk of fire is no joke – City police will enforce the fireworks ban!

California is in a historic drought. Combine that with the likelihood of another aggressive wildfire season, and both make for a potentially devastating situation. South San Francisco Fire, Police, and City officials warn against the use of fireworks this Fourth of July.
“We take this very seriously and we will issue fines for those caught using any type of firework in the City of South San Francisco – even the ‘safe and sane’ fireworks are illegal,” says South San Francisco Police Chief Jeff Azzopardi. “We realize people want to have a good time, but there are other ways to do it without jeopardizing the safety of others.”
California hasn’t seen conditions this dry since 1977, and climate experts say this could be the worst drought the state has seen in more than a millennium.
“We are in a serious drought and we are extremely concerned about how dry and hot it is already,” said South San Francisco Fire Chief Jess Magallanes. “Not only is setting off fireworks at home illegal, but they can also start wildfires and there’s a significant threat of injuries.” Chief Magallanes also adds that a simple sparkler, for example, in dry grass would in 30 to 60 seconds result in a blaze that could no longer be controlled by a garden hose.
Each July Fourth, thousands of people nationwide, most often children and teens, are injured while using fireworks. “So many people don’t realize the dangers associated with fireworks,” says Chief Magallanes. “Not only do thousands of people get injured every year but about two in five fires started by fireworks each year are reported on Independence Day.
Fireworks by the Numbers
According to the National Fire Protection Association, on average, 19,500 fires per year. These fires caused an average of five deaths, 46 civilian injuries, and an average of $105 million in direct property damage.
Brush, grass, or forest fires accounted for three of every five (59 percent) reported fires started by fireworks. In all, 87 percent of the fireworks fires were outdoor fires, according to the U.S. Fire Administration’s National Fire Incident Reporting System (NFIRS).
From CalOES (California Office of Emergency Services)

After a year off from professional Fourth of July celebrations due to the COVID-19 pandemic, holiday traditions big and small will return to California neighborhoods this year.

Fireworks go on sale in California on June 28, and nearly 300 communities allow “Safe and Sane” fireworks. The “Safe and Sane” seal indicates the firework is approved by authorities and legal to sell and use. It’s important for Californians to know the law and understand the hazards of fireworks before setting them off.

Fireworks can cause serious damage and injuries if they’re not used correctly. As California enters wildfire season, the California Governor’s Office of Emergency Services (Cal OES) reminds Californians to understand how flying sparks or embers can cause a fire.

California has a zero-tolerance policy for selling and using illegal fireworks. It’s illegal to sell, transport, or use fireworks without the “Safe and Sane” seal. It’s also against the law to possess or use fireworks in a community where they’re not permitted.

Other fireworks that explode, go into the air, or move on the ground in an uncontrollable manner are also illegal in the state.

While many people enjoy the loud booms and flashing lights of fireworks, it can be terrifying and overwhelming for animals. On the Fourth of July, many pets run when they hear the noises and get lost. There are a few things pet owners can do to help animals keep their cool:

I am hard of hearing and when I go to bed I take out my hearing aids. If I wake up to the pounding of the fireworks and the lights shining through my blackout curtains- they are too close to my home and not the safest place to do them.

I would hate to see houses burn down from fireworks. We don’t need that added to our stressors and crisis to our daily lives.

This is becoming more serious and dangerous! Can we please do something about it.

Can we talk to south city police department to tighten the fire works!!!!
What happens to the individuals that get caught, or arrested? Is it just a fine and be sent on their way?