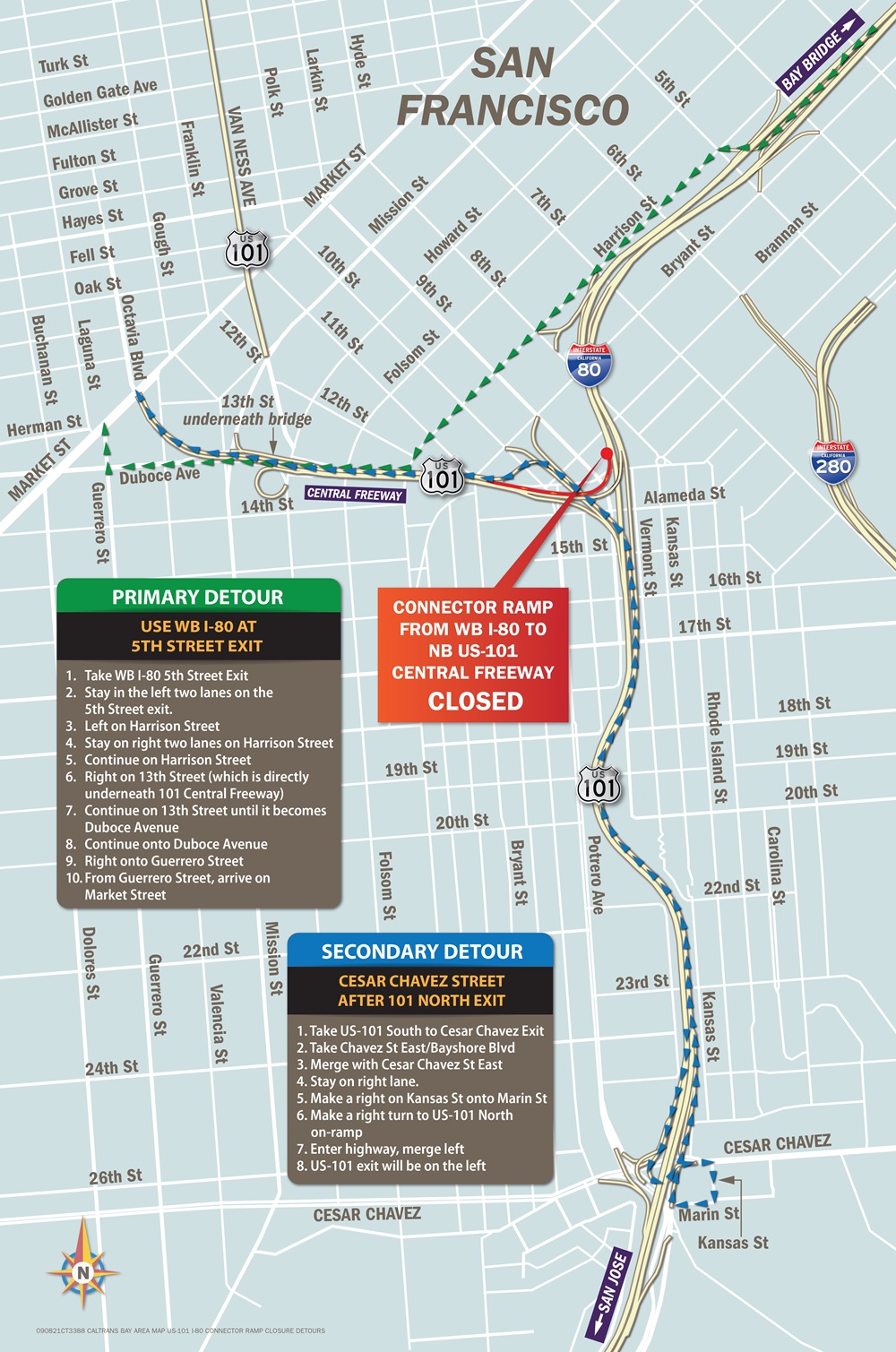 Northbound U.S.-101 Golden Gate Bridge Exit-Weekend Closure, Detour Routes:
During the work, motorists traveling on northbound 101 onto the northbound 101/Golden Gate Bridge Exit at Interstate 80 (I-80) will be detoured onto the 5th Street exit. During the closure of Northbound  101 exit, the primary detour to westerly destinations including west of Market Street and San Francisco’s Civic Center will be the westbound I-80 Exit at 5th Street.
Primary Detour- Use WB I-80 at 5th Street Exit
Motorists traveling west of Market Street and/or to SF Civic Center will be detoured onto the 5th Street exit from westbound I-80. Stay in the left two lanes on the 5th Street Exit. Left on Harrison Street. Stay on right two lanes on Harrison Street. Continue on Harrison Street. Right on 13th Street (which is directly underneath the 101 Central Freeway). Continue onto Duboce Avenue. Right onto Guerrero Street. From Guerrero Street, arrive on Market Street. 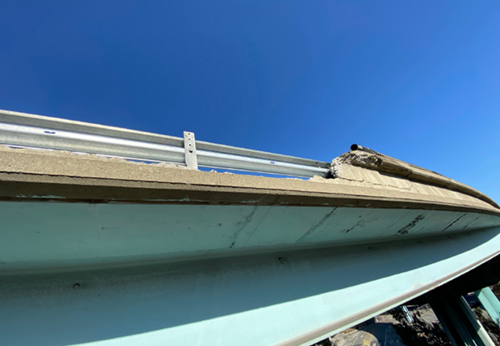 In October 2020, a semi-truck crashed into the concrete barrier on outside curve of the connector ramp, creating enough damage that a ten-foot section needed to be removed by a large crane. Smaller pieces were shoveled and tossed into a dump truck. A sweeper truck took care of the smallest bits. The empty space in the barrier was quickly patched with a long section of steel guardrail. The final photo shows a cross-section of the new guardrail that will be installed. It’s very similar to the existing guardrail on either side.

Caltrans will close a busy connector ramp in San Francisco that links westbound Interstate 80 to northbound Highway 101. The closure will last a full weekend, starting 10:00 PM, Friday, September 24 until 5:00 AM, Monday, September 27. During the closure, Caltrans will replace a guardrail that was badly damaged after being struck by a semi-truck last October. 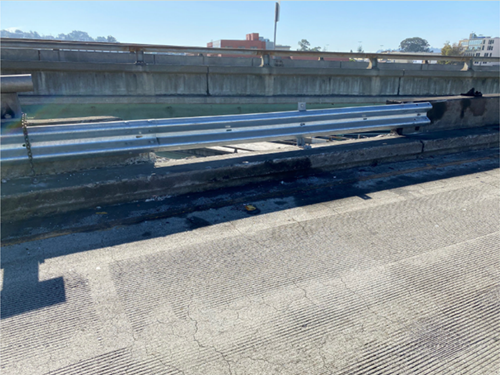 Motorists arriving in San Francisco via the Bay Bridge typically use the connector ramp to access destinations in central, northern, and western San Francisco. 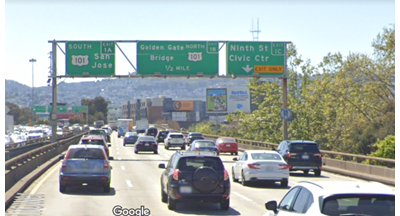 The ramp is often busy, serving nearly 2,000 vehicles per hour during peak periods, including many hours during the weekend 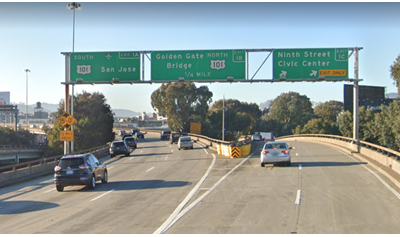 Motorists should plan for delays on westbound I-80, including the Bay Bridge, as vehicles normally taking the connector ramp will choose upstream ramps including the Fremont, Fifth and Ninth street ramps, which are usually crowded on weekends. 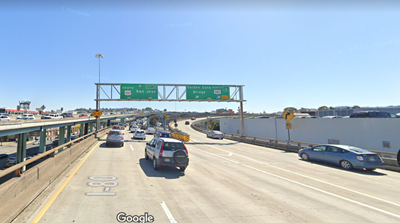 The 7th Street on-ramp (which is signed for Hwy 101 despite connecting to westbound I-80), will be closed for the weekend to reduce traffic on I-80 and prevent back-ups on city streets. 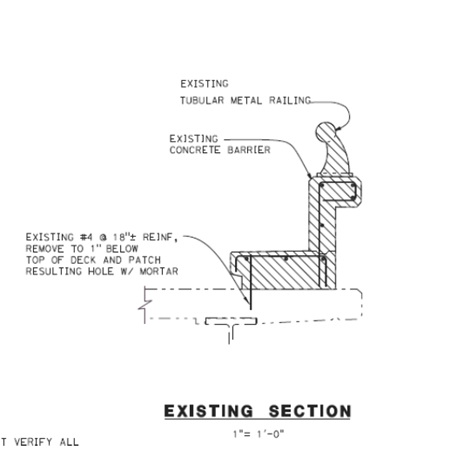 Except for the westbound I-80 to northbound Hwy 101 connector ramp and the 7th Street on-ramp, all on- and -off ramps to I-80 and Hwy 101 in San Francisco will remain open during the weekend. 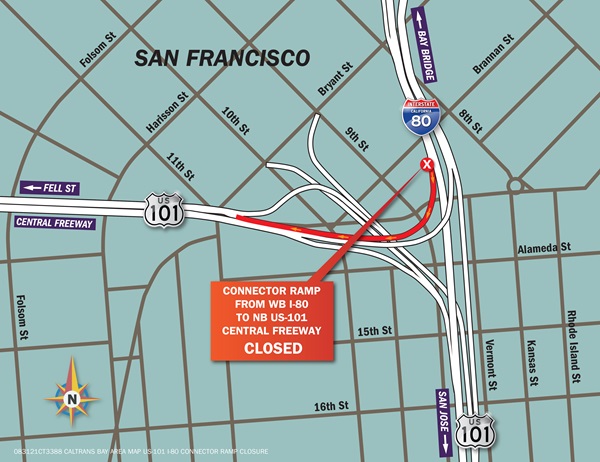