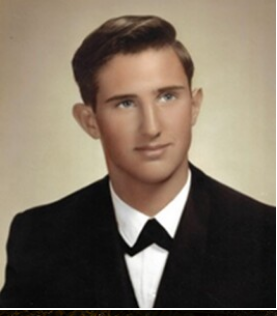 Donald “Don” Eugene Brengolini passed away peacefully in Reno, Nevada on September 9, 2021 at the age of 73 after a very short illness.

Father, son, brother, mentor, soulmate, friend, lover of all things humorous and adventurous, and proud Navy veteran – these are just a few of the words that defined this incredible man who has been dearly missed since the moment he left us to enter Heaven.

Don was the first child born to Rosie and Bacci Brengolini of South San Francisco, California where he was born and raised. An expert marksman who joined the Navy during the Vietnam War, he was the recipient of many awards for his marksmanship and service. He was a very skilled shooter – so good that during bootcamp, he was approached by his superiors about becoming a sniper, a position he declined because he felt it gave him an unfair advantage. This was just one of the examples of Don’s strong beliefs in fairness and doing the right thing – beliefs that he never strayed from.

He was also a big believer in enjoying life to the fullest. His family and friends, pets and hobbies filled his days with meaning and purpose. An avid animal lover, he spent many loving moments with his dogs Missy and Sugar and his cat Gizmo who loved to sit on his lap while he watched television (usually westerns or war documentaries).

His beloved former dogs Otto, Crissy and Wally were waiting for him when he passed to guide him home. Don also loved spending time with his favorite people: Mike Julian (Debra), his friend of over 40 years, whom he loved getting into trouble with, his daughters Suzanne and Christine, that were the blessed recipients of a father’s love, guidance, and wonderful sense of humor that made the hard moments of life seem less so; Sean Kelly, with whom he felt a bond and kinship with due to their similar views on life, their mutual love for Suzanne, and both having served in the U.S. Navy – 20 years apart; Roberta Jones who brought him happiness during his later years for which we are grateful. And last but not least, he is finally reunited with the love of his life, Evelyn Grimm Moore, who predeceased him in 2012 after a 30+ year relationship and with whom he will be interred.

Don was extremely proud of his Naval career, having served in the Vietnam War from 1968-1972 first as a Boilerman Third Class and then as a Petty Officer Third Class. He was rarely seen without wearing a Vietnam War or Navy Veteran hat. Whenever a stranger thanked him for his service, he just humbly replied thank you with a smile and nod of appreciation (in his honor, when you see a veteran, consider saying thank you—it will make Don smile). Another of Don’s great loves was being very active in shooting competitions (trap, league, sniper). Even in his 70s, he could outshoot someone half his age. He knew all about guns and rifles and both his daughters Christine and Suzanne had the privilege of trying out different firearms out in the Nevada desert and getting his mentoring at the firing range.

Don was also the kind of man that wasn’t afraid of hard work as evidenced from his decades-long career as a garbage man with Recology / Sunset Scavenger. He was also an avid “doer” and could be found working on any number of projects around the house or yard. What he was most proud of though was being a good man and an even better citizen – always striving to do the right thing even when no one was looking. Since his passing, we have been blessed to hear story after story of people that were impacted by this wonderful man. He will be dearly missed by so many.

He is survived by his brother Ronald Brengolini, his cousin Lisa Donati, Alma Phillips, Mike Phillips, Jr., Samantha Moos, Laurie Kundysek (Bob, Russell, Laura and their spouses and children), his grand-and-great grandchildren: Ashley Pineda (William, Ayden and Logan), Kyle Pineda (Savannah, Nehemiah, Naomi, Hannah and Jax), and his grandchildren Kieryn, Landon and Beverly (Danielle and Josh). He is predeceased by his beloved nephew Jason and his brother Robert.

Visitation, 12PM-12:30PM, chapel service will be held for family and friends at 12:30pm, Monday, September 27th at the Garden Chapel located at 885 El Camino Real, South San Francisco, CA 94080 The committal will take place at Holy Cross Catholic Cemetery, 1500 Mission Road, Colma, CA 94014 at 2pm. A reception in his honor will be held later due to Covid-19 concerns.