With all of the high rises, new homes without height consideration for neighbors, and passage of Bills 9 & 10, it is imperative that citizens attend Planning Commission meetings, 1st & 3rd Thursday of the month.

This is the most important step in the review and approval process by Commissioners of both commercial & residential new construction and remodels. There is no doubt the Miller Ave building has affected all surrounding neighbors and concerned many SSF citizens. Now, there’s concern of heights/density guideleines of new homes being built. Olive/Pine an example.

Placing height limitations in consideration for neighbor’s enjoyment and happiness within their own homes, obstruction of view of nature and direct sunlight, and sense of safety is not  much to ask during planning and approvals, “love your neighbor as yourself.” There’s also density and parking concerns.

There is no registration system in place for email notification and reminders (as set up for Council & events) and meetings are not always published on website’s “Meetings” tab; however, accessible by selecting tabs: Departments – Economic & Development – Planning – Planning Commission. {CLICK HERE} 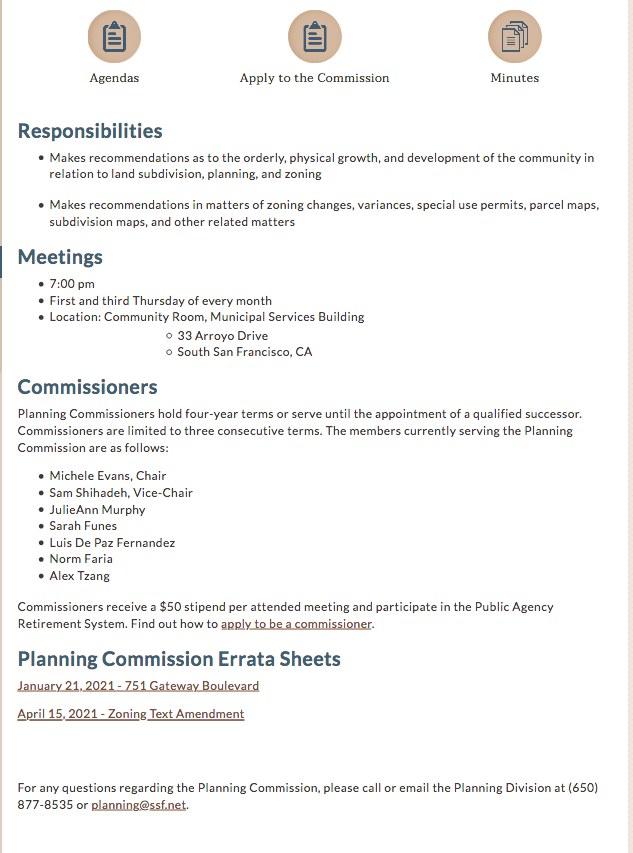 Our city is being destroyed, not only by the new buildings themselves, but with the ridiculous increase in traffic density because of them.

I’ve lived here almost 40 years, right off Hickey Blvd in the Briarcliffe townhome complex which replaced the El Rancho Drive-In. We are up on a hill so view for us is not an issue (yet!).

However, I used to be able to pull out of the complex and onto Hickey without effort to go in either direction, but now I am often sitting in my caqr up to five minutes to wait for a break in the horrible traffic we now have. And as for traveling on El Camino Real, forget about it! It seems to constantly be tied up with some road or building construction. So I have learned to take Junipero Serra instead, 50 mph stopping only at King then clear to Westborough, then onto 280 S at Avalon from there if necessary. I suppose now that I’m revealing my “detour”, I’ll soon have the same problem with J.S. as I’ve had with ECR, so dummy me!

But this City Council and the County Commission are interested in only one thing: Getting people to move here and increase property tax revenues! Never mind those of us who’ve been here decades or even forever, we’re not a considerations. When the PUC project happened we had amazing turn-outs for their “workshops” at the old Arroyo Ave. MSB.

But they were clearly not interested in our feelings or input, only to basically talk us into these massive projects.

We were given 3 minutes each to state our views, but the CC spent the entire time watching for the timer to run out rather than paying any real heed to what we had to say. I think we need a new plan for getting a Mayor in place in SSF by legislative process rather than letting the CC members to simply rotate into the position. Maybe then we’ll get some attention paid to us and have our concerns legitimately addressed.

I moved here from San Francisco in 1984 to GET AWAY from the horrible traffic problem they’ve always had, but now I’m increasingly finding the same problem here and I’m not pleased.

I’m 70 years old and this is my last home and it’s all paid for, so don’t try and tell me my solution is to move somewhere else, ’cause it ISN’T!

We need to STOP the CC and County from signing off on these enormous projects, but the only way that’s going to happen is via the VOTING PROCESS. Get out and get people who actually CARE to run for City and County office, not just re-electing the old ones because they’re the only FAMILIAR name on the ballots, ’cause “familiar” is no longer enough.

We have precious little left to lose here, people, everything we love about this city is evaporating before our eyes,and WE’RE LETTING IN HAPPEN via the voting process. So don’t just vote “familiar” next time, get some new blood at the City and County level who know and understand our issues.