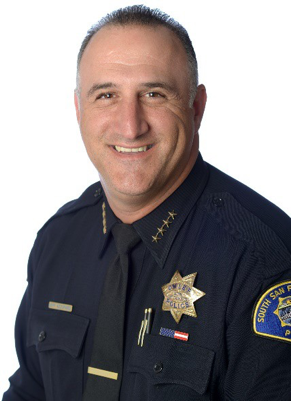 After nearly 30 years of service to the residents of South San Francisco, Police Chief Jeff Azzopardi is ready to hang up his hat.

“This is bittersweet for me. This community and my colleagues are my family and it’s hard to say goodbye, but I’m also looking forward to a new chapter in my life and spending more time with my family,” said Police Chief Jeff Azzopardi.

“Chief Azzopardi will be sorely missed at the City. The respect he has from his department and his colleagues
within the City is something to be admired. We have been lucky to have him part of the police department for as long as we have,” said South San Francisco Mayor Mark Addiego.

Chief Azzopardi was appointed South San Francisco Police Chief in September, 2014. He started his law enforcement career with the South San Francisco Police Department in 1993. Over the course of his career, Azzopardi rose through the departmental ranks serving as Corporal, Sergeant, Lieutenant, and ultimately Captain in 2009. As a Captain, Azzopardi led both the Operations Division as well as the Services Division. “Azzopardi’s experience, along with his collaborative leadership, provides the ideal foundation for
partnerships with the community to make sure that South San Francisco remains one of the safest cities in the bay area,” adds Mayor Addiego.

Throughout his distinguished career, Chief Azzopardi was the recipient of many recognitions, including:
• 2016 – awarded the Executive Certificate by the California commission on Peace Officer Standards and Training
• 2017 – awarded the Lifetime Achievement Award from the South San Francisco Chamber of Commerce
• 2018 – awarded the Carl Valero Lifetime Achievement award from Pacifica American Little league
• 2019 – awarded the Police Officer of the Year from the San Mateo County Trial Lawyers Association
By his peers, Chief Azzopardi is known as a personable, hard-working, and genuine leader who truly cares about his organization and his community. He has earned the respect and trust of his law enforcement peers and subordinates, the City leadership, and the residents of South San Francisco.

“Chief Azzopardi is leaving behind some big shoes to fill. He’s led the department with intelligence and empathy, and really fostered a sense of community,” said South San Francisco City Manager Mike Futrell, “he is a great friend to the community. He will be missed.”

Futrell and the City Council now have the task of finding a replacement for Chief Azzopardi. The recruitment will kick off with a Community Meeting on Tuesday, September 14, 2021 at 6:00 p.m. in the Municipal Services Building, Council Chambers. Members of the community are encouraged to participate in this meeting, which will be a hybrid meeting of in-person as well as virtual via Zoom, to share with the City Council what they are looking for in the next police chief. Residents are also encouraged to fill out an online survey and share their thoughts on what characteristics they are looking for in a police chief, at www.ssf.net/PoliceChiefSurvey.