This is the story of Socks, a sweet old cat who crossed the Rainbow Bridge a few years ago. I had to make the very difficult decision to help him in this transition and I hope it was the right one. For many years Socks, a big, beautiful gray and white cat, lived at my place of work, the adult school in SSF, and was what you would call “a stray cat”. On February 11th of 2016 I took him home and he became a member of our feline family. This is his story. 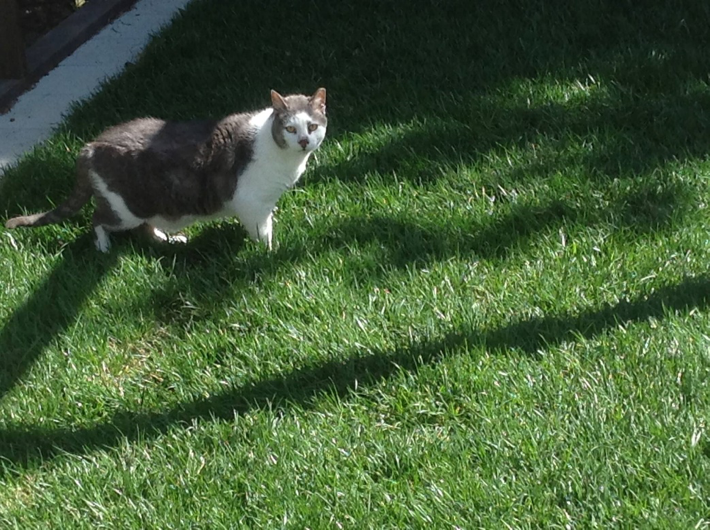 Around 2005 our evening custodian, Walter, was feeding a cat in the front of the school.  He had named this cat Socks. I don’t remember ever seeing Socks, but a few years later a new cat appeared in the back of the campus which is adjacent to a golf course. That area of the campus always had at least one or two cats that came from the golf course. I spayed and neutered and fed whoever showed up back there. Walter told me that that new cat was Socks.

So, he joined the back group and then, slowly, one at the time, the other cats either disappeared or passed away and Socks was left alone. He had an ear tip and was neutered, so somebody had done some TNR (Trap/Neuter/Return) with him. I think it was in 2010 that he was already the only cat there. I fed him every day including Saturday, Sundays, holidays, rain or shine, and if I ever went on vacation (extremely rare occurrence) I found a friend to take over for me.

When the school was closed, I stood at one end of the courtyard by the gate, called his name and he would come running from the other end. At the school he could find shelter from the rain, but not from the cold and I felt guilty leaving him there, but I didn’t think he could adjust to indoor life. As time went by, he became more friendly, but did not like to be petted or picked up.

The SSF Adult School, next to Baden High School, has a large field that also backs up to the California Golf Course

So, things went on like this for years until December of 2015 when he disappeared for a week. I was beside myself. I thought I would never see him again, and I realized how attached I had grown to this cat. But, after a week, he came back! He was limping and I could tell that something happened during his absence so I decided to take him to the vet who diagnosed arthritis in all four legs as well as the beginning of skin cancer on his nose. He seemed to be getting better until one day, while I was feeding him, I realized he had been bitten.  At that time, I made the decision to take him home.  He was not tame enough to be a house cat, but I wanted to give it a try. I took him home on the 11th of February 2016 (by that time I had retired from my teaching job at the school) and that’s when his new life began.  At first, he did not want to come out of the carrier, but after a couple of days, when he did, he chose a spot by the heater in the “cat room” and claimed those four square feet as his.

I had 12 other indoor cats and he was number 13. I was apprehensive about his interaction with the other cats, but he never bothered them, and the other cats never bothered him. It was almost as if he wasn’t even aware of their presence. There was never a fight, not even a hiss.   A couple of times I placed him in the catio I have in my backyard, but I could tell that he was not interested in the outdoors. He had had enough of that!  He was very happy to spend his days in the cat room in the sunshine or near the heater.

My bedroom is at the other end of the hallway so, after a few weeks, I started picking him up and putting him on my bed at night so that I could spend some time with him watching TV. He loved it! I could feel his very soft purr and the vibrations in his chest next to me. That became a ritual and sometimes I found him on my bed waiting for me. He was such a good cat, always used the litter box, never fussed over the food, never caused any problems with the other cats, And oddly enough, never showed any interest in going back outside.

Every night I sat on my bed and held Socks on my chest.  I told him that he was a good boy, and that he had brought so much joy into my life, and that I was happy that I had taken him home and as I was talking to him his purr became louder and louder. Those were really special moments. I cherish those memories. As time went on, the condition of his nose deteriorated. First it turned black, then scabs started to fall off. In spite of that, his breathing was good, his appetite was good, and his behavior seemed normal. I tried to keep him going as long as I could but at a certain point he stopped eating and I could tell he had serious difficulties breathing. He also had frequent sneezing attacks.

I had to make the very painful decision to help him cross the Rainbow Bridge. As I have done with all my cats, I held him while the doctor gave him the injection.  Just before he fell asleep, I told him “I love you Socks.  I will see you on the other side”  and I hope that’s what’s going to happen.

Socks was really a special cat. I had a special bond with him and I could feel his love for me.  He was so laid-back, smart, sweet and affectionate. He never complained about anything and never gave me any problems. I thought that if I had a husband, I would like somebody like Socks!

I’ve written the story to encourage those who are hesitant in taking a stray cat home, to give it a try.  It is true that some outdoor cats never adjust to indoor life, but the opposite is also true. Socks, who was an outdoor cat for at least ten years, adjusted very well and never expressed any desire to return to the outdoors. My regret is not having taken him home sooner. He had eleven wonderful months here with me and I wish it had been more.

I love you and I miss you Socks.

Thank you for bringing so much joy into my life.

If you would like to adopt a rescued pet, please consider making an appointment with our Peninsula Humane Society and SPCA to visit and find that special love to bring home. Please call 650-340-7022 to schedule an appointment. Visit www.PHS-SPCA.org for more information

Sign up for EverythingSouthCity.com bi-weekly digest HERE – stay up to date with local news & views!

I feel your pain. We had a tuxedo cat for 19 years and, similarly, had to help him stop the pain. We still miss him a lot. 🙁

The pain never goes away completely. I am sorry for your cat. I am sure he too was much loved.

socks was the lucky one, he got the better of the trade

He sure did and I am sorry it was only 11 months.