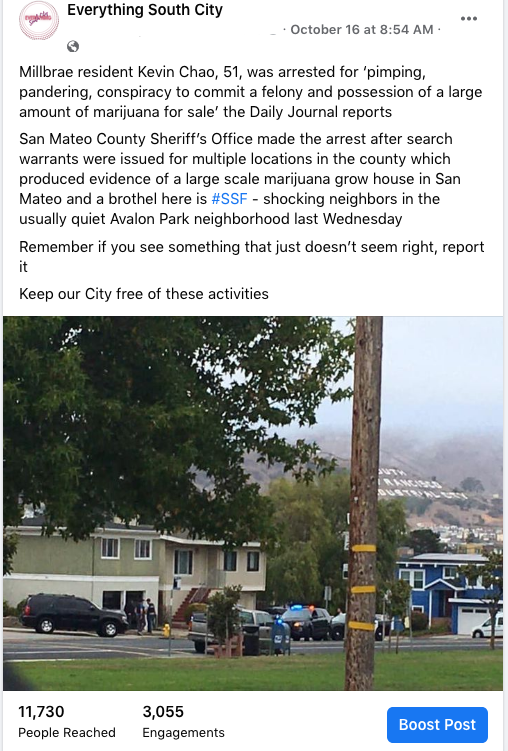 Millbrae resident Kevin Chao, 51, was arrested for ‘pimping, pandering, conspiracy to commit a felony and possession of a large amount of marijuana for sale’ the Daily Journal reports

San Mateo County Sheriff’s Office made the arrest after search warrants were issued for multiple locations in the county which produced evidence of a large scale marijuana grow house in San Mateo and a brothel here is #SSF – shocking neighbors in the usually quiet Avalon Park neighborhood last Wednesday
Remember if you see something that just doesn’t seem right, report it

Keep our City free of these activities

SUSPECTED PIMPS ARRESTED / THREE VICTIMS RESCUED –
On 10/13/2021, the South San Francisco Police Department’s Neighborhood Response Team executed a search warrant at a residential brothel on the 300 block of Avalon Drive after a month-long investigation.
Two adult male suspects (who were residents of San Francisco and Santa Clara) and three adult female victims were contacted at the scene. Evidence of a commercial sex operation was located, and the males were ultimately arrested for pimping and pandering related offenses and ultimately booked into San Mateo County Jail. The victims were offered support services through the San Mateo County Human Trafficking Initiative.
This was the fifth residential brothel which the Neighborhood Response Team has shut down within the past year. In total, seven suspected pimps have been arrested and eight victims have been contacted and provided with services and resources.

The South San Francisco Police Department continues to combat human trafficking, and we encourage anyone who has information regarding potential human trafficking cases in our city to notify us at 650-877-8900. You may also contact the National Human Trafficking Hotline at 888-373-7888.

the millbrae mafia is starting to spread
it’s wings, KEEP YOUR EYES & EARS OPEN, its your neighborhood