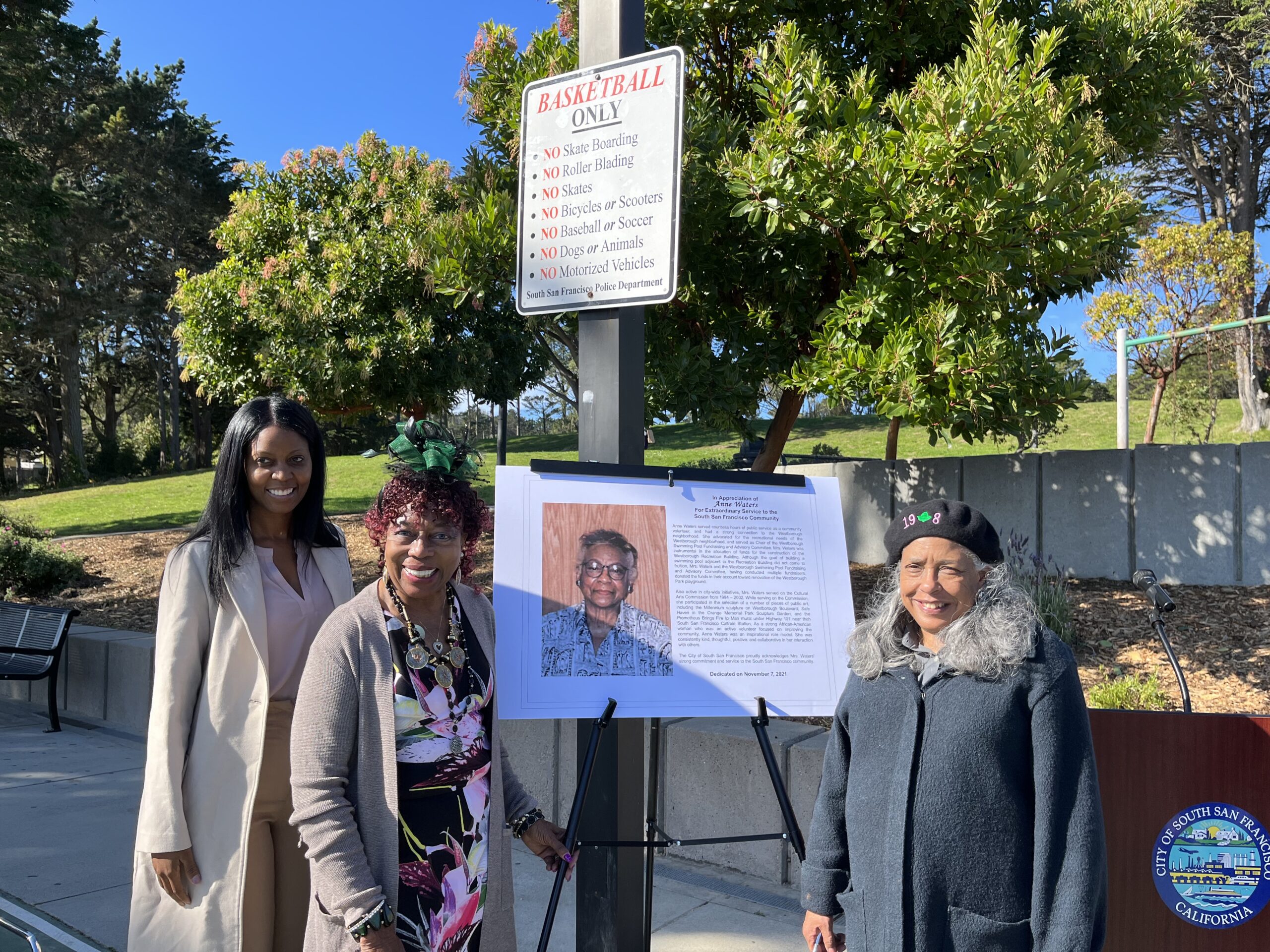 I received an invitation from City Council. It was an official event to name the Anne Waters Playground at  Westborough Park 2380 Galway Drive last November 7, 2021, from 10 to 11 am. Refreshments follow.

Drumroll. Waving my hand like sports fans do; three cheers for Anne, “Whoo, Whoo, Whoo!”. Stealing a line from Pia Wurtzbach, Miss Universe 2015, when asked why she should be the next Miss Universe, “…..I am confidently beautiful with a heart.” Anne was a confidently beautiful human with a kind heart.  I am grateful in this small universe called South San Francisco, there once lived a human named “Anne Waters”, who used her energy and love to contribute value to the community. This was one event in the city I was not going to miss because she is dear to my heart, the one who always had my back. 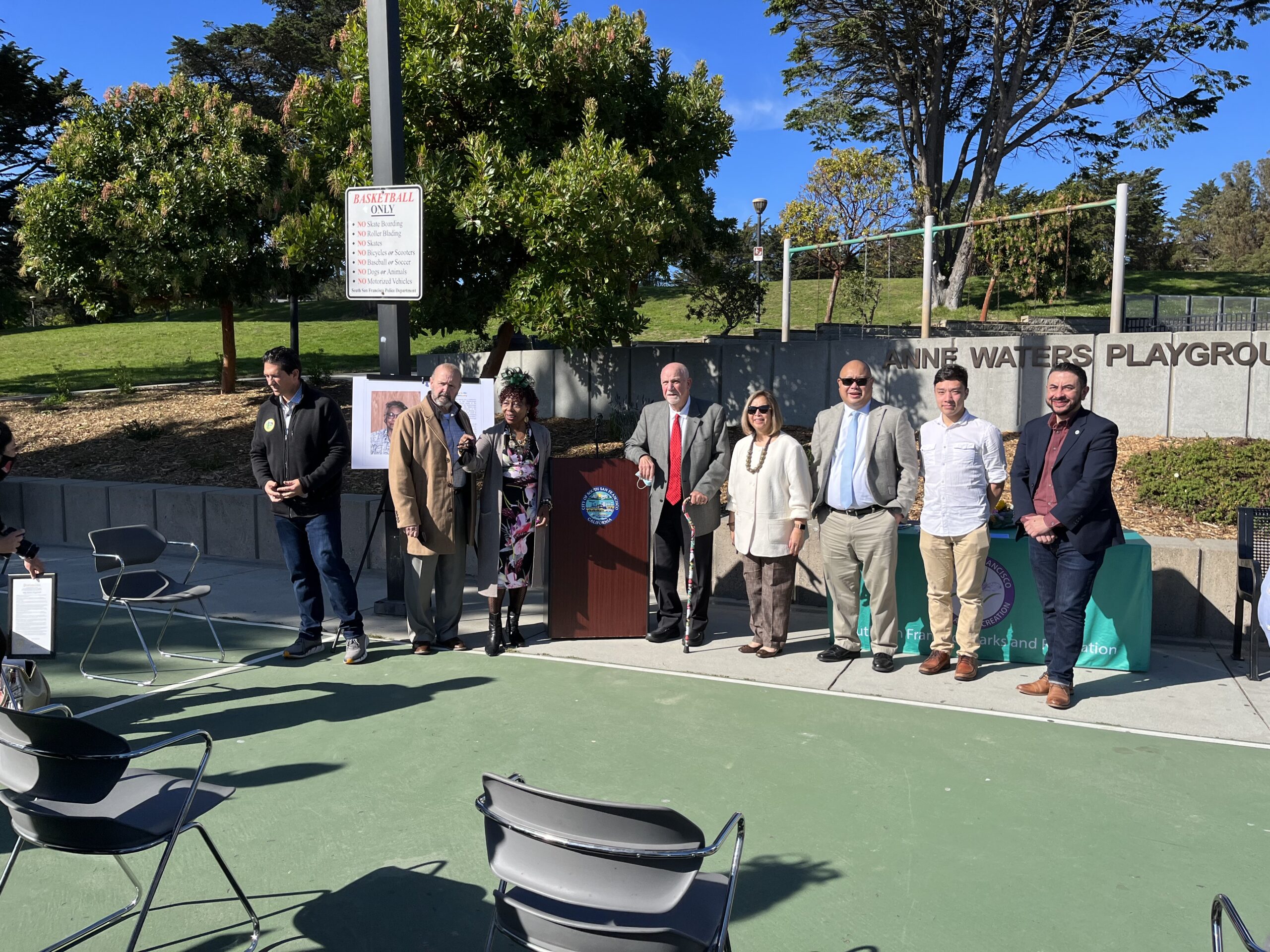 Quoted in the background factsheet shared by Sharon Ranals, Assistant City Manager— “The naming request was considered according to the City’s Naming Policy, which included review by the City Council Ad-Hoc Naming Committee, which is comprised of Mayor Addiego and Councilmember Flor Nicolas; the Parks and Recreation Commission; with final approval by the full City Council on July 28, 2021”.

“Anne’s active advocacy for quality of life improvements for the Westborough area was instrumental in the allocation of funds for the construction of the recreation building in Westborough Park;

As I kid, I remember our house was near a natural swimming pool, a river where I learned swimming.  So I always look for hotels with swimming pools when I go on training or a conference. Thanks, Anne for the swimming pool for residents to enjoy. 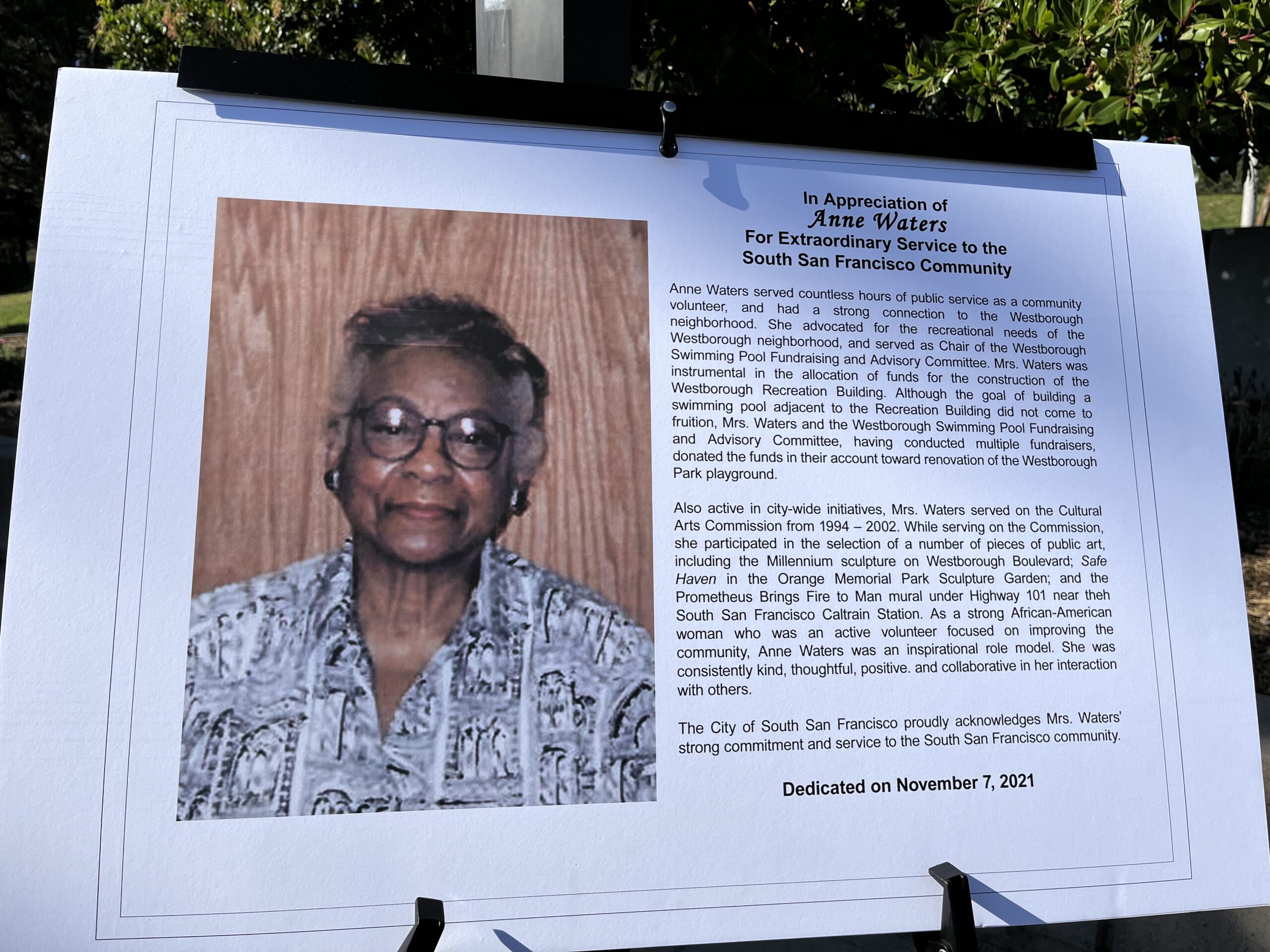 I met Anne Waters when I was recruited to be a member of the Cultural Arts Commission by the former Fire Chief and Mayor Jack Drago who I met for the first time at the Sister City project with Pasig City. Mayor Drago said, “Anne has a Masters’s degree in Public Administration.” You know you’ve got a friend when there’s a ‘Namaste’ moment “The indwelling light in me honors and respect the indwelling light in you.” If people honor the indwelling light, hate and violence disappear. She invited me to her house at Shannon Drive; I don’t remember meeting her husband Al but I met her sister who said hi to me at a mall.  Originally, there were 15 members with unlimited terms. When a gathering of Commissioners were held, I heard a snide remark, “Who do they think they are? The Supreme Court?” Later on, it was cut down to nine with limited terms.

Paul Wakefield assistant to world-famous Ansel Adam framed Ansel’s black and white photography of Yosemite. He told  me “Sitting in a Commission meeting  is boring’.” After a short time, he stepped down. To make the meeting interesting,  I saw other members as characters brewing with drama worthy to be cast in a Broadway theater.

The Brown Act prevented board members in to meet for fun conversations: if the majority meet together, the meeting constitutes an ‘official meeting’ even the group were talking nonsensical stuff or sports.

As in any board, there were committees such as the Sculpture, Youth Arts Committee. I remember meeting with Anne and Glenda Ali for coffee/tea brainstorming,  on raising funds for high school youth art scholarships.  An idea sprouted to write a letter to Oprah who had emerged as a billionaire. Anne had to write a letter to Oprah and she had to include her picture so Oprah would know she was a black lady.  If you heard Oprah’s lecture on The Power of No —she has to say no to a lot of people who asked for donations including friends and celebrities like Stevie Wonder.  She donates to causes of which are close to her soul.  Glenda Ali has a fascinating profile: beauty queen title, model, flight stewardess in a hijacked plane featured in Reader’s Digest & Federal employee.  One time Glenda brought an interesting tidbit, “All the senior citizens taking classes at Parks and Rec  have a crush on Barry.”  The three of us broke up laughing. Giggle, Giggles, Giggle. I said, “Definitely !” Barry Nagel when he was Director of Parks and Recreation was at the peak of his attractiveness— tall, dark, and movie star handsome.  He said he used to be a model in fashion catalogs. He was very helpful and accommodating for the Sister City project.  I wrote him a thank you letter that he was a bagel and an angel.  Later, he became  City Manager, the best-looking one in the State of CA.

Glenda also asked me if I’d like to attend and listen to Jim Carrey, the comedian-actor who was a guest speaker in a training session with models. Not interested.  I told Anne in my younger years I was asked if I’d like to be in a Clint Eastwood movie as an extra. The detective actor said, “We pay extras $50 an hour and Clint Eastwood is a nice person to work with.”   I said to the actor that I wasn’t interested in being a performer but more in the background like scriptwriting, music composition, or set art design.  Anne said,” You missed your chance to work with Clint Eastwood? If I were you, I’d say Yes in a second.”  She was just trying to humor me. We laughed and giggled with Happy Talking. 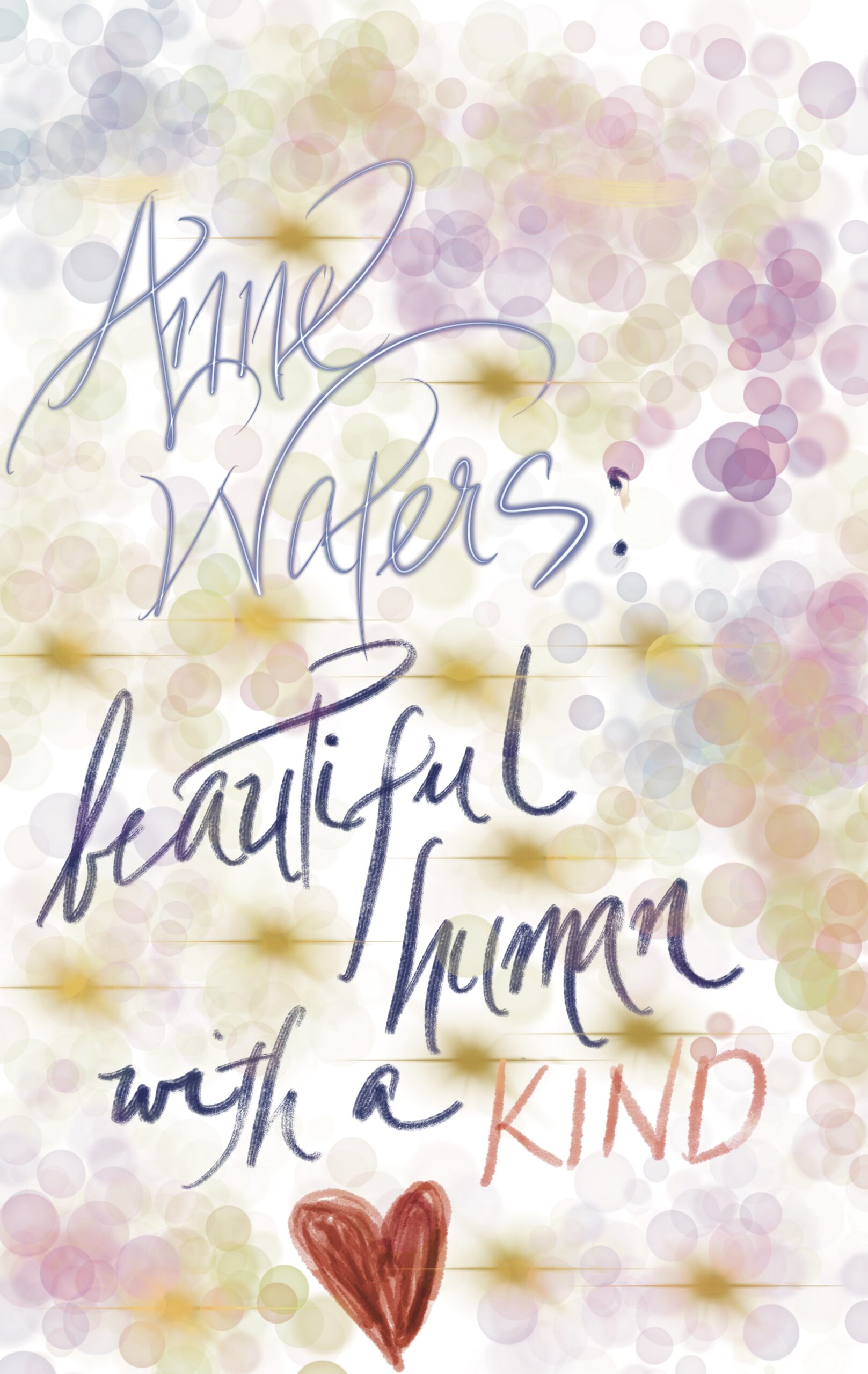 Anne was always kind but a few were unkind but say thank you to the kind ones at least once but to unkind ones you must say thank you a million times because they’re the ones who help you to become strong, resilient human, resistant strain species ready to overcome crises and obstacles. As in baseball, life pitches you different balls (fastballs, curveball, sinker, change up, cutter, knuckles) and you are ready to face them. Anne said, “The Elizabeth I know doesn’t settle for anything less or sit back and just take it when confronted by put-downs.”

On a side note during this event:

I had the opportunity to meet the two newest Council members, a very young James Coleman- I said to him ‘Saw your ad in YouTube’; practiced my Spanish ‘ Nosotros te queremos.’ with Eddie Flores  who answered ‘Yo tambien’.   The speakers instead of Anne, kept saying  ‘Alice Waters’ , a renowned chef of Chez Panisse. I said to Councilman Flores , the Mayor instead of calling  Flor Nagales, the name should be Flor Flores. The City Council has a recognition name pattern of two Marks, two flowers (Flor ,singular; Flores, plural) leaving councilman Coleman in his own category.

Anne’s photo and her accomplishments can be viewed inside the Community Center. 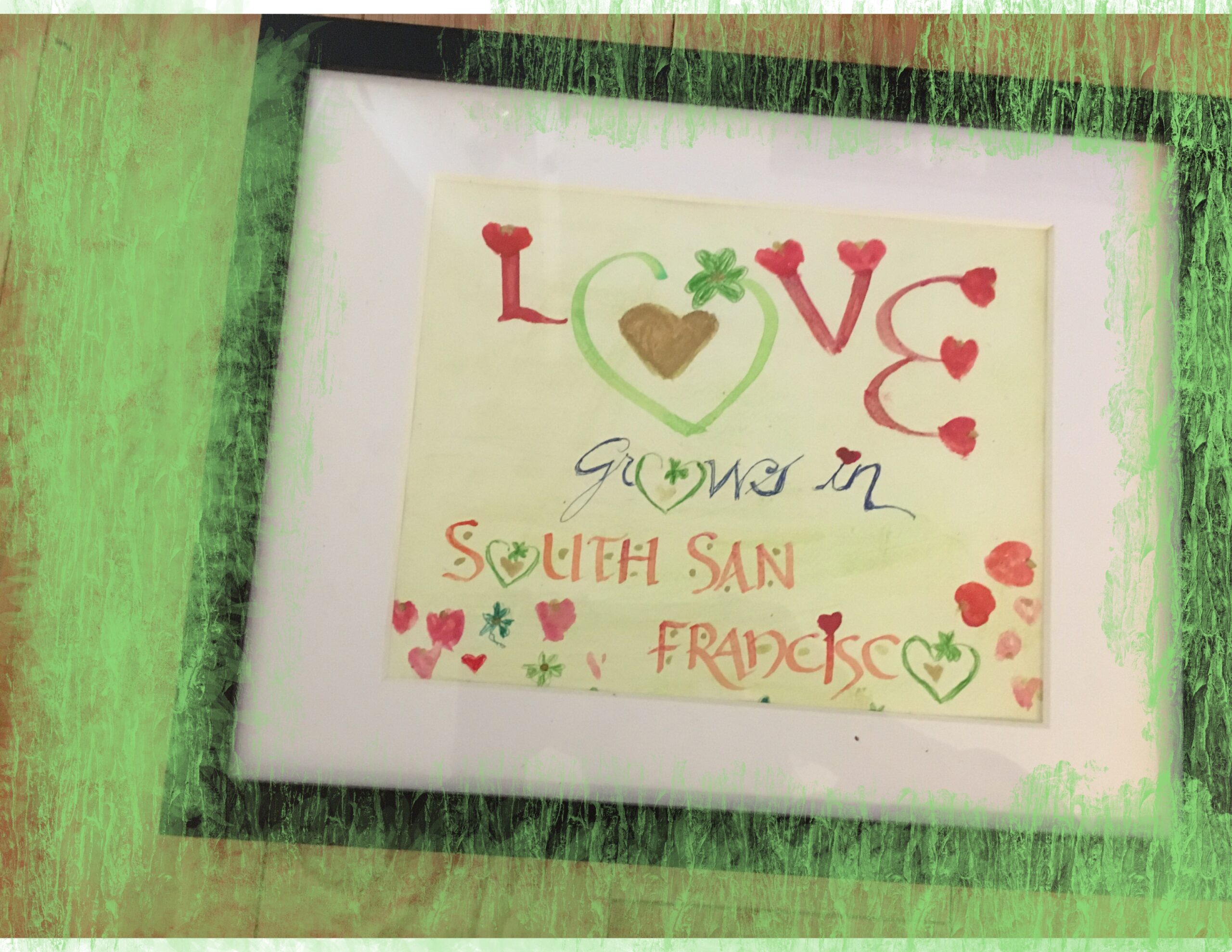 Annes’s fact sheet stated most of her cohorts who knew her have passed away but there are still a few like me who is still alive and kicking, writing a tribute to her. Memories of her triggered me to write ‘Love has no agenda. It is just full of action items.’  Thanks to all the City staff that made this event possible.

Note: In these pandemic times folks are surrounded by the anxiety of the future, Anne may recommend this song Happy Talk, a musical by Rodgers and Hammerstein performed in theater and movie  South Pacific sung by Bloody Mary. 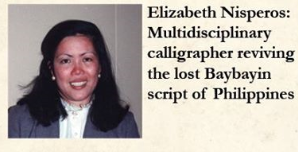 Nisperos is currently participating in a Nanowrimo (National Novel Writing Month) with a challenge to write a novel of 50,000 words in November for 30 days. The novel is a fantasy romantic suspense thriller set in South San Francisco. If any resident would like to drop in as a character in a cameo role, please email ESC editor CLICK HERE.

Another photo of the playground

Thank you Mina, for providing another photo. – Editor

Thank you Elizabeth for stepping forward to remember an ordinary citizen who did extraordinary deeds in her community.
I was on the swimming pool committee as the Public Information Officer.

I recall that moment where we brainstormed to raise funds for her dream for the Westborough community, an Olympic sized swimming pool, with a hydrotherapy pool for seniors, or a library. Oprah’s name came up but we suggested investing in the stock market to raise funds, but she nixed the idea as too risky.

Anne’s value to SSF was her determination. Her reach to the other side of the City and encourage people in Old Town and other neighborhoods to seek public office. She encouraged me to seek a place on the school board. And I did, only to lose, but was elected a few years ago and currently serving.

She took the initiative to poll her community and presented it to the city council. Her report found a need to build a facility in Westborough for the youth and seniors. She mentioned that Mr. Callan,whose name bears the street and developer of the area, donated land for a library, but years later the City sold it.

Anne is a hero to this community for her encouragement to others, was matched by former Council member Joe Fernekes who also encouraged us to try and ‘run’ for office. Anne and her husband Al, were respected members and considered a ‘player’ in this town. She also understood her place in SSF politics, that it was not her time or the time of people of color.

A gracious,and wonderful lady left us but is now enshrined with her name on a public playground after the committee donated the unspent funds for the swimming pool she had hoped for her community.

Thank you to the City of SSF for their kind attention to making this a memorable proud moment for her and the diverse population that makes up the City. Thank you to the Park& Recreation for the moment.