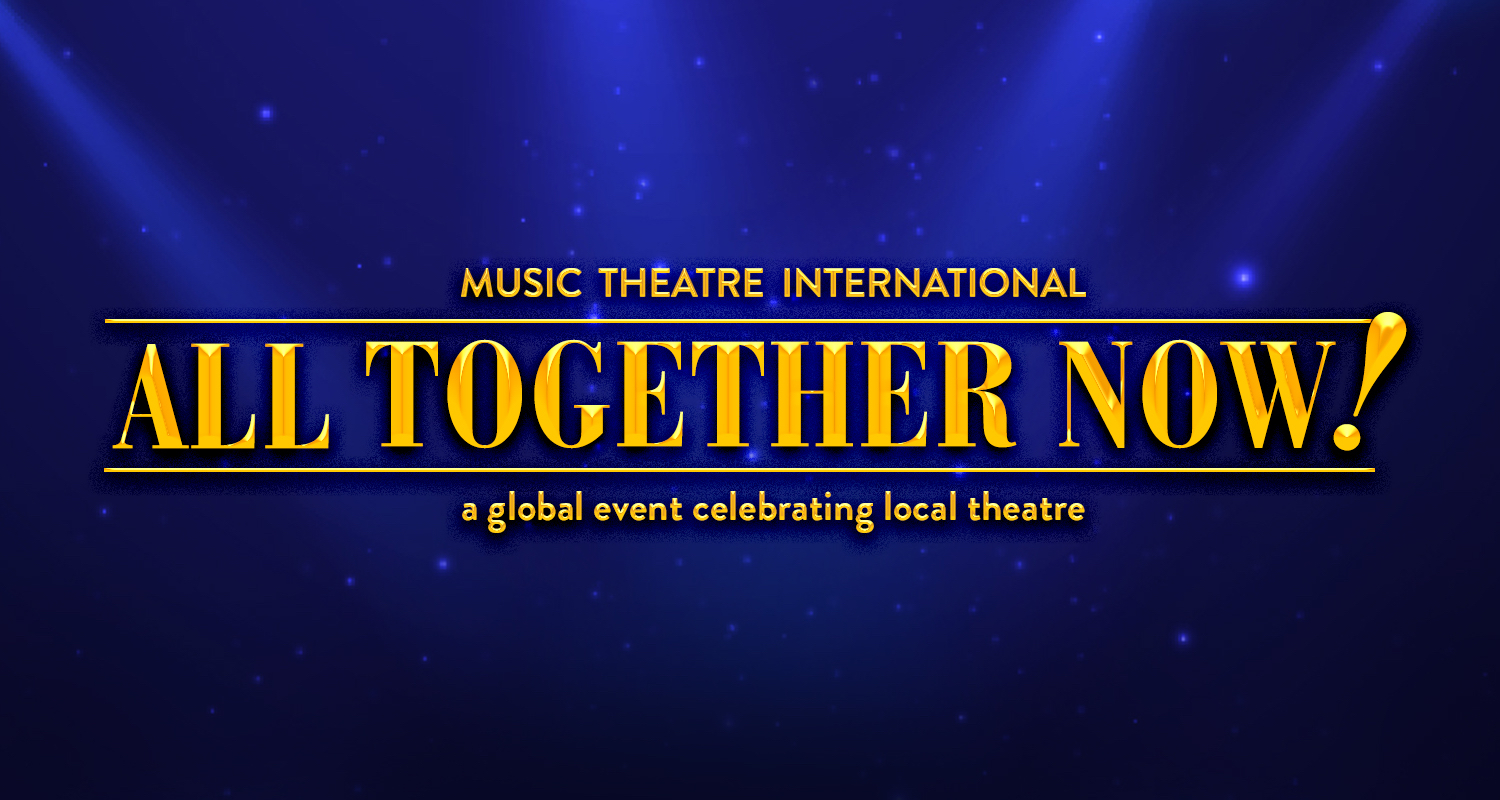 San Francisco’s Landmark Musical Theatre (Jon Rosen, Artistic Director) is pleased to announce its production and full cast of Music Theatre International’s ALL TOGETHER NOW! A GLOBAL EVENT CELEBRATING LOCAL THEATRE, which will be presented for eight performances as their inaugural show at Landmark’s new permanent home, Theater 33 (533 Sutter Street, San Francisco, CA 94012, between Mason and Powell). All eight performances will take place between November 12 – 15, 2021, with a gala opening on Friday, November 12 at 8:00 p.m.
ALL TOGETHER NOW! was created by Timothy Allen McDonald, Gerry McIntyre, Racky Plews, Jeff Calhoun and John Prignano on behalf of one of the largest theatrical licensing companies in the world,  Music Theatre International, as a benefit for schools and companies worldwide to celebrate the return to live theatre. Landmark’s production will be directed and staged by Jon Rosen and Meredith Fox, with music and vocal direction by Christopher Hewitt. All tickets are only $10.00 and are available now at LandmarkMusicals.com.
“We are incredibly excited to bring this marvelous revue of musical theatre to the stage at our new permanent location, Theater 33,” said artistic director Jon Rosen. “Having a place we can call home for at least the next five years has been a dream for our company, and we are thrilled to be able to share this weekend of exciting music with over 3,000 other theater companies around the globe who will be presenting their own versions of this revue all on the same weekend. Our 2021-2022 season got off to an exciting start with our current production of THE 25TH ANNUAL PUTNAM COUNTY SPELLING BEE (still running thru November 7 at the Children’s Creativity Museum), but we can’t wait to do our first production at Theatre 33.” Rosen noted that in the coming weeks, Landmark will have season subscription tickets on sale for their three 2022 productions, including the Bay Area premiere of John Kander and Fred Ebb’s marvelous (and rarely seen) musical about dance marathons, STEEL PIER. STEEL PIER will be followed by the wonderful family musical YOU’RE A GOOD MAN, CHARLIE BROWN, and a surprise summer production to-be-announced in January 2022. Regarding the summer production, Rosen mentioned that “our closing show is a remarkable addition which has been unavailable for performing in San Francisco due to rights conflicts for several years, but now that it is available, it is the perfect show to close our season!”
ABOUT ALL TOGETHER NOW!
Music Theatre International, one of the largest licensing agencies of musical theatre in the world, has collaborated with over fifty composers and lyricists to assemble this most remarkable revue. MTI’s President and CEO, Drew Cohen stated, “MTI’s ALL TOGETHER NOW! is about bringing people back to the theatre, whether as audience members or cast, crew and musicians. The revue features songs from the world’s most iconic musicals, so there is definitely something for everyone to enjoy. Our goal with this worldwide event is for organizations to provide hope, inspiration and excitement to their communities through the transformative power of musical theatre.”
Landmark’s production of ALL TOGETHER NOW! features 16 songs from MTI’s catalog including Disney’s BEAUTY AND THE BEAST, LES MISERABLES, SONGS FOR A NEW WORLD, LITTLE SHOP OF HORRORS, MY FAIR LADY, RENT and many more!
Landmark is dedicating this production to the memory of Leslie Bricusse, lyricist of two of the songs in the show, who passed away at age 90 less than a month before the scheduled production of ALL TOGETHER NOW! Bricusse wrote songs for many movies and musicals during his long illustrious career, both on his own and with a variety of acclaimed composer/collaborators including the incomparable Anthony Newley (“Pure Imagination” from the Newley-Bricusse collaboration CHARLIE AND THE CHOCOLATE FACTORY is included in Landmark’s ALL TOGETHER NOW!), Frank Wildhorn (“This is the Moment” from the Wildhorn-Bricusse musical JEKYLL AND HYDE is also included), as well as Henry Mancini and John Williams. THE ROAR OF THE GREASEPAINT, THE SMELL OF THE CROWD, another Newley-Bricusse collaboration, was a featured production of Landmark Musical Theatre’s 2017 season garnering a Theatre Bay Area award nomination for songstress Juanita Harris for Best Featured Actress in a Musical.

The adult ensemble of Landmark Musical Theatre’s ALL TOGETHER NOW! consists of Bekah Broas, Geoffrey Colton, Matt and Jen Coogan, Erika Coyne, Michaela Donofrio, McKay Elwood, Liz Jassin, Ryan Liu, Willow Mae and Jepoy Ramos. Curtis Pollard joins the group in a special appearance as Edna Turnblad in the song “You Can’t Stop The Beat” from the musical HAIRSPRAY. William Rhea will appear as a swing, substituting for Mr. Elwood in two performances.
Ms. Broas, Mr. Colton, Mr. Ramos, Mr. Pollard and Mr. Rhea are currently appearing in Landmark’s THE 25TH ANNUAL PUTNAM COUNTY SPELLING BEE at the Creativity Theater through November 7. Colton was previously seen as Cladwell B. Cladwell in Landmark’s 2020 production of URINETOWN (Landmark’s last production before closing for 20 months due to the pandemic). Rhea was The Man In Chair in Landmark’s 2019 production of THE DROWSY CHAPERONE. Ramos was a member of the ensemble in Landmark’s 2018 incarnation of the satirical revue TOMFOOLERY.
The youth ensemble includes Nyara Afshar, Lilia Bernstein, Charlotte Curtin and Emma Curtin, Kelsey Dougherty, Camden Greathouse and Rowen Weeramanthy. Ms. Dougherty made her San Francisco stage debut with Landmark in the 2019 production of EVITA.
ALL TOGETHER NOW! will open on Friday, November 12, 2021, at 8:00 p.m., with a Gala Celebration after the performance on stage at Theatre 33. Subsequent performances are: Saturday, November 13 at 3:00 p.m., 6:00 p.m. and 8:30 p.m., Sunday, November 14 at 3:00 p.m., 6:00 p.m. and 8:30 p.m., and Monday, November 15 at 8:00 p.m. Due to licensing restrictions, there are no other performances planned for this special production.
The running time for ALL TOGETHER NOW! is approximately 75 minutes with a 15-minute intermission. All tickets are $10.00 and those purchased from Landmark’s website include a $5 concession voucher which can be redeemed at the theatre’s own concession stand for wine, beer, soft drinks, water, coffee, tea and snacks, and can also be used at 533 Sutter’s full bar on the first floor. Tickets are available now at LandmarkMusicals.com.
Landmark Musical Theatre’s 2021-2022 season will continue with STEEL PIER (February 12 – March 27, 2022), YOU’RE A GOOD MAN, CHARLIE BROWN (May 21 – June 26, 2022), and a surprise summer 2022 production to-be-announced. Tickets for the remaining performances in Landmark’s 2021-2022 season will be available for purchase on their website starting Monday, November 1, 2021.
Landmark Musical Theatre plans to follow all city, state and federal health mandates throughout the season to reduce risk and protect the health of both actors and audience.  At the current time, audience members either need to provide proof of vaccination or a recent (within 72 hours) Covid-free test at the time of attending a performance, and all audience members must be masked indoors, especially while sitting in their seats unless they are drinking or eating. All regulations will be closely monitored, and policies will be updated as the situation with the virus evolves. For up-to-date information on Landmark Musical Theatre’s COVID-19 protocols, please visit landmarkmusicals.com/covid-19-protocols.
ABOUT LANDMARK MUSICAL THEATRE
Landmark Musical Theatre is entering its seventh season in 2021, following its enforced 20-month hiatus due to Covid-19 after closing its most recent production, URINETOWN, in early March 2020. Formed in the summer of 2015 after bringing its Santa Clara production of the satirical musical TOMFOOLERY (based on the hilarious words and music of Tom Lehrer) to the Eureka (now the Gateway) Theatre, Landmark has produced shows such as THE BOY FROM OZ (Bay area premiere), EVITA, HAIR (TBA winner, Best Choreography Tier 3), and THE DROWSY CHAPERONE at several San Francisco venues, including the Shelton Theater, the Exit Theatre, and the Great Star Theater. Landmark is thrilled to finally have “a place of its own” in Theater 33 at 533 Sutter Street between Mason and Powell.