NOTE: We have received some good feedback on the information we are sharing about high quality performances in our Bay Area region. Some remarks have asked we stick to sharing only performances available here in South City. However, we have a larger response asking for more information on these performances within driving distance of us. Therefore, we will continue to share and encourage our neighbors to enjoy live entertainment wherever it suits them best. Thank you.

San Jose Stage Company (Randall King, Artistic Director and Cathleen King, Executive Director) is pleased to announce the full cast and creative team for The Stage’s second production in its 39th Season, Charles Dickens’ GREAT EXPECTATIONS adapted by Neil Bartlett. Directed by Kenneth Kelleher, GREAT EXPECTATIONS will run from November 17 – December 12, 2021 at San Jose Stage Company (490 South 1st Street, San Jose, CA, 95113). The press opening will take place on Saturday, November 20th at 8:00 p.m. Tickets range from $32 – $72 and can be purchased through the Box Office at (408) 283-7142 or online at www.thestage.org. For more information, visit www.thestage.org.
Desire becomes destiny in Neil Bartlett’s powerful adaptation of Charles Dickens’ classic tale.  A young orphan named Pip takes us on a journey through the windswept marshes of England, to the cobweb-strewn lair of mad Miss Havisham, and into the ruthless streets of London. A story of survival filled with intrigue and unexpected twists that has captivated generations, the true nature of generosity and the price of revenge comes to life in this raw adaptation. Might we find it in our hearts to forgive the unforgivable?
“GREAT EXPECTATIONS explores social injustice as well as universal human emotions and experiences,  all equally relatable in the 1860’s as in today’s world,” says Artistic Director, Randall King, “to judge upon physical appearances rather than depth of heart or quality of character and conscience. This story challenges us to open our hearts and minds to become kinder, more compassionate, and better at discerning true moral values. There is no better time than now to reflect on the regrets of the past, to learn from the mistakes upon the paths we have chosen. Dickens’ message seems to float on a cloud of timeless relevance: to embrace optimism and hope, to be kinder to ourselves and others.”
Director Kenneth Kelleher comments “Dickens is a masterful storyteller and the thought of realizing this particular adaptation of GREAT EXPECTATIONS with six extremely versatile actors, each playing many roles, is a unique opportunity to re-tell Pip’s tale using the leanest approach of reducing the story to its barest and intimate form.” 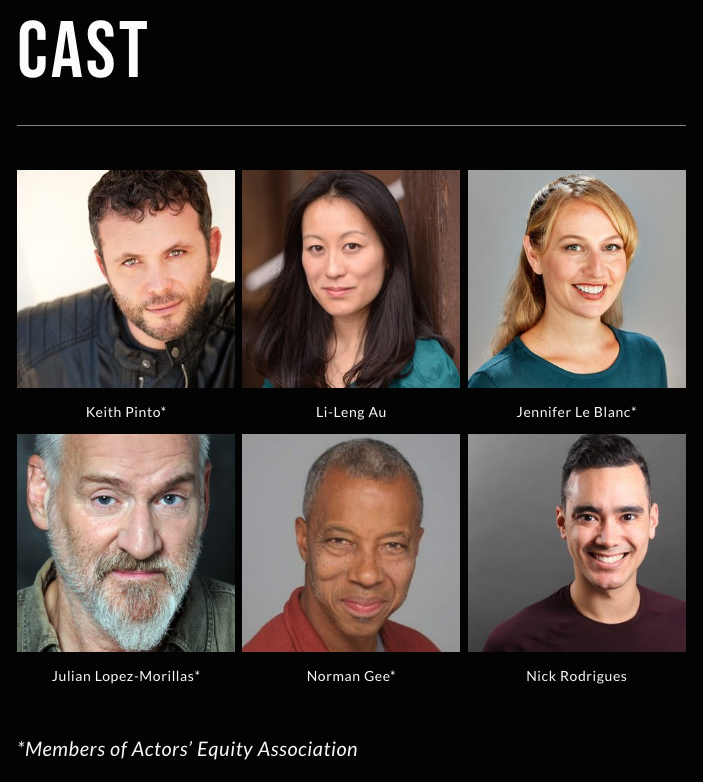 The cast of GREAT EXPECTATIONS will feature Keith Pinto* as “Pip,” Norman Gee* as “Joe/Wimmick/Drummel,” Jennifer Le Blanc* as “Compeyson/Biddy/Estella,” Julian Lopez-Morillas* as “Magwich/Pumblechook/Jaggers,” Li-Leng Au as “Mrs. Joe/Miss Havisham,” and Nick Rodrigues as “Watzel/Sergeant/Herbert Pocket.”
In addition to Kenneth Kelleher, the creative team includes Jean Cardinale (Costume Designer), Maurice Vercoutere (Lighting Designer), Steve Schoenbeck (Sound Designer), Jenn Trampeneau (Props Coordinator), and Sarah Ellen Boynt* (Stage Manager).
*Member of Actors’ Equity Association, the union of professional actors and stage managers.
San Jose Stage Company’s 39th Season RESILIENCE will continue with a fully staged World Premiere of STRANGE COURTESIES (February 2 – 27, 2022; Press Opening: February 5, 2022), Pulitzer Prize-winning AUGUST: OSAGE COUNTY (March 30 – April 24, 2022; Press Opening: April 2, 2022), and the rarely produced THE TOOTH OF CRIME (June 1 – 26, 2022; Press Opening: June 4, 2022).
All programming and scheduling is subject to change. Complete casting and creative teams for the remainder of season will be announced at a later date.
Tickets and subscriptions may be purchased online at www.thestage.org.
About Neil Bartlett
Neil Bartlett has been making rule-breaking theatre and performance since 1983. After a controversial early career he was appointed Artistic Director of the Lyric Hammersmith in London in 1994; since leaving the Lyric in 2005 major cultural producers he has worked for include the National, the Abbey in Dublin, the Bristol Old Vic, the Manchester Royal Exchange, the Edinburgh International, Manchester International, Brighton, Aldeburgh and Holland Festivals, the Wellcome Foundation and Tate Britain .
Neil is also an acclaimed author, with a whole shelf of novels, plays, adaptations and translations to his name. His most recent novel, The Disappearance Boy, earned him a nomination as Stonewall Author of the Year in 2014 – and his very first novel, Ready to Catch Him Should He Fall, has just been republished (2017) by Profile as a Serpent’s Tail Classic.
About San Jose Stage Company
Through powerful, provocative and profound theatre, San Jose Stage Company (The Stage) seeks to expand community, forge creative partnerships and challenge individuals in order to illuminate the human condition.
San Jose Stage Company is recognized as the South Bay’s leading professional theatre company, having earned a reputation for artistic excellence through imaginative and edgy theatrical experiences that spark ideas and dialogue with the audience. The Stage is dedicated to the presentation and development of new works, with a concentration on American literature scripted by modern playwrights that speak to the conditions, hopes and fears of humanity. With the farthest seat in the house no more than 15 feet from the three-quarter thrust stage, the connection between actor and audience is profoundly visceral.
The Stage is a multi-award-winning theatre company, including the 2018 Paine Knickerbocker Award for continued contributions to Bay Area theatre from the San Francisco Bay Area Theatre Critics Circle. The Stage has produced over 185 productions, including 18 world premieres and 49 new works and is ranked as the 2nd largest professional theatre and 8th largest performance arts organization in Silicon Valley (Silicon Valley Business Journal).
Attracting over 30,000 patrons to downtown and employing more than 150 local artists annually, San Jose Stage Company continues to be a vital force in the region’s economic and creative landscape.
Ticket Information
Subscriptions and single tickets to San Jose Stage Company’s 2021-2022 Season may be purchased online at www.thestage.org. Subscription packages range from $125 – $260 with savings up to 30%.
COVID-19 Safety Protocols for In-Person Performances
The health and safety of our artists, patrons, and staff are top priority. In order to safely return to in-person performances at San Jose Stage Company, we have implemented the following policies and procedures:
The Stage is constantly monitoring state and county guidelines and these policies may change and evolve over time. We appreciate your cooperation in maintaining safety at The Stage. These policies and procedures are in place to keep our doors open for live performances. If you have any questions or concerns regarding our policies, please contact us via email at boxoffice@thestage.org.