Residents of South San Francisco petitioned Mayor Mark Nagales, requesting that the tree on Sign Hill be decorated in blue and yellow in support of Ukraine, knowing this lit tree is a beacon of hope to those throughout the area, as well as to those who fly in and out of San Francisco International Airport. The Mayor responded to Everything South City’s Facebook query stating the City was adding lights to the City Hall on Grand Avenue, in blue and yellow. While we appreciate that effort, we also recognize City Hall at night is only visible to those who drive by after dark.

“Thank you for this update” we replied to the Mayor’s response post. “Lighting our City Hall is well & fine, yet unless you are driving down Grand Ave after dark, it falls short. As a leading City in so many ways, we have the opportunity to share the light as a beacon to ALL who see our Sign Hill tree throughout our City and the Peninsula

If memory serves, the cost to light the tree for a month is $3k.  If the City does not want to put the $$ out to do so, what if residents helped fund this? A request by residents, and if  needed, paid by residents
Please consider this request
Thank you

With over 200 interactions on this post by neighbors making it known they were in favor of seeing the tree lit, we appreciate the Mayor’s follow up post:

Everything South City yes, not only did we start lighting up City Hall in support of Ukraine, we will be lighting up the tree in support of the Ukrainian people. It will take us a few days to redo the lighting, but I’ll keep you posted.

Around 6pm on March 9th, Angelique Presidente was first to report the tree lit up and captured a quick picture which we shared on our social media. Excited residents – exciting residents to know our support would be an inspiration to those far and wide.
Later that same evening, professional photographer Roger Cain was able to capture a few more pictures for us to share on our social media.

Slava Kr immediately posted on our FB page beneath the picture of Sign Hill Tree,

“As a Ukrainian born, long time South San Francisco resident that still has very close ties to Ukraine, and to whom this war is very personal, I would like to thank you, my great neighbors, for all the support. I hope war will never touch your families and your close ones.”

On March 1st, another South City resident Kerry C, spoke with Fox News reporter, Amber Lee, about her long-time friend Olena who is in Kyiv Ukraine, hunkered in the basement with her children while war rages outside.  {SEE VIDEO INTERVIEW HERE} 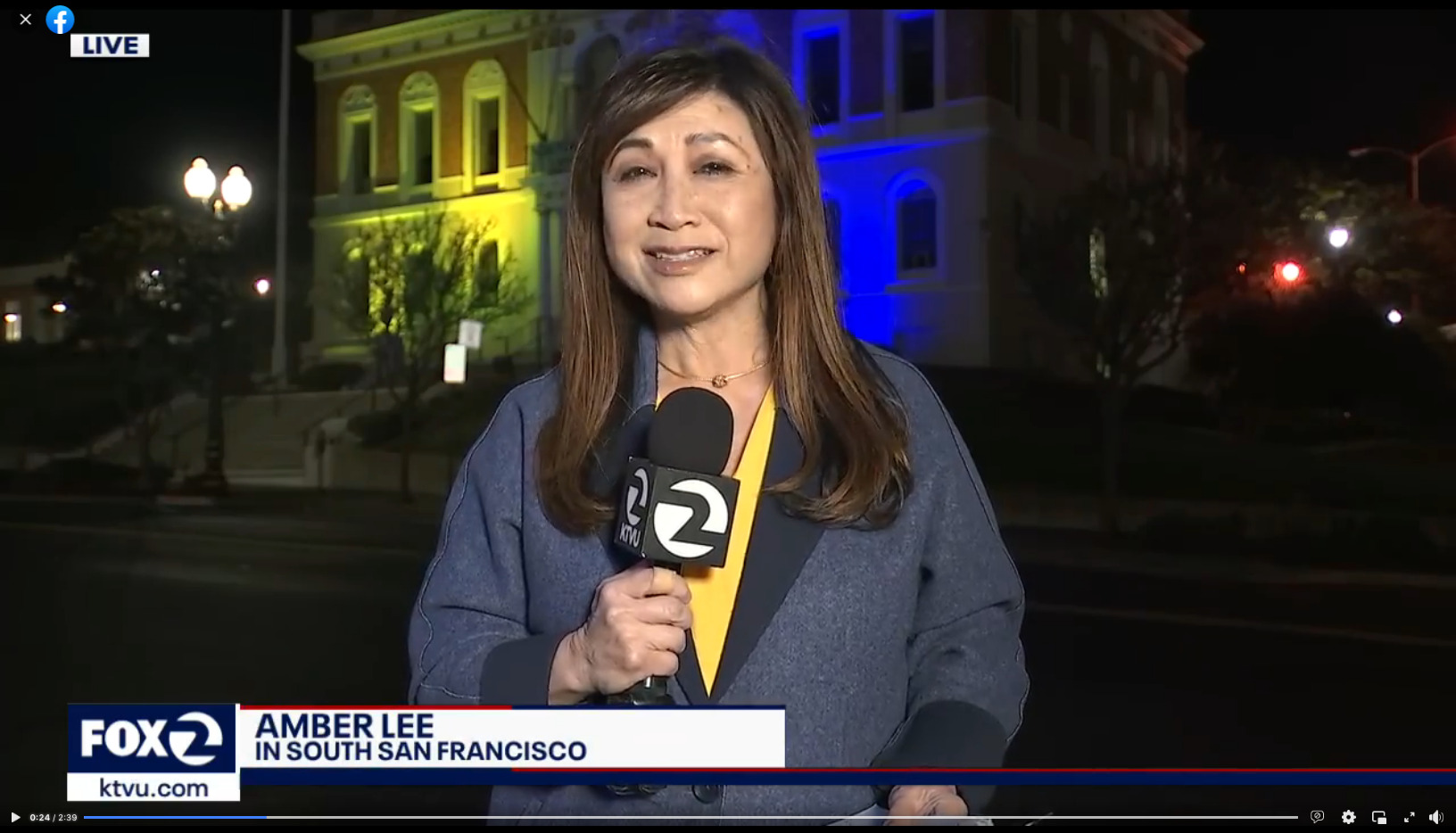 Amber Lee shares ‘An elementary school teacher in #southsanfrancisco tells me she wants to help her longtime friend in #ukraine who’s in hiding with her family. The friend gives me a first hand account of what it’s like now living with “anxiety, dread, terror and anger.”‘

Mayor Mark Nagales shared her report on his public FB page with this comment:

“As Mayor of the City of South San Francisco, I gave direction to light City Hall in the colors of the Ukrainian flag to show solidarity with Ukraine and its people. I’m praying for this senseless violence to end.”

A very few comments from our FB page in response to the City’s actions of lighting the tree:

**Amazing..BIG Thanks to the person in charge of decorating the tree, let me tell you, you do such a wonderful and amazing job.- Emily Lucero
** My home City  – Awesome for the support – Olivia Esquivel Mueller
** Thank you so much for your support! – Diana Do
** Thank you from the bottom of my heart. Our friends and family fight for their freedom! – Liliya Sergiyenko
** Much Love and Respect From The Industrial City – Jr Martinez
**Thank you Mayor and Everything South City !!!!! – Christine Becker
** I saw this tonight from my window in Millbrae! Thank you so much, I love it, my prayers go out to Ukraine – Lisa Nardi Sartor
**Amazing … Gotta love South City for this one. –Yvonne Amoroso Winters
**Well done South City – Jennifer Mitchell
**Viva Ukraine!!! -Oscar Oliveros

A few shared photos from locals 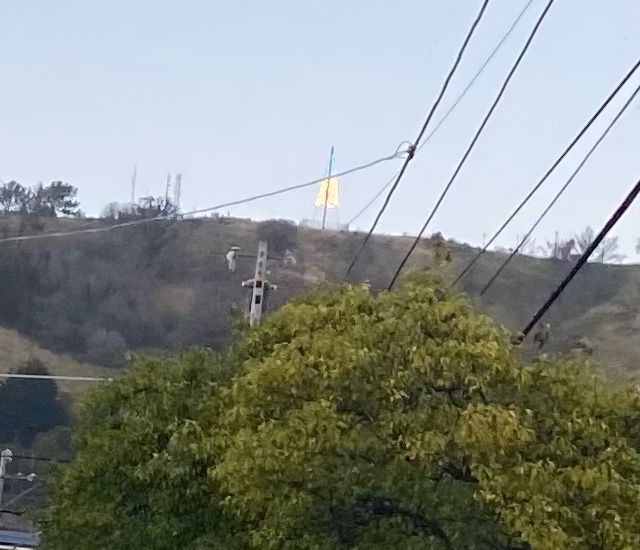 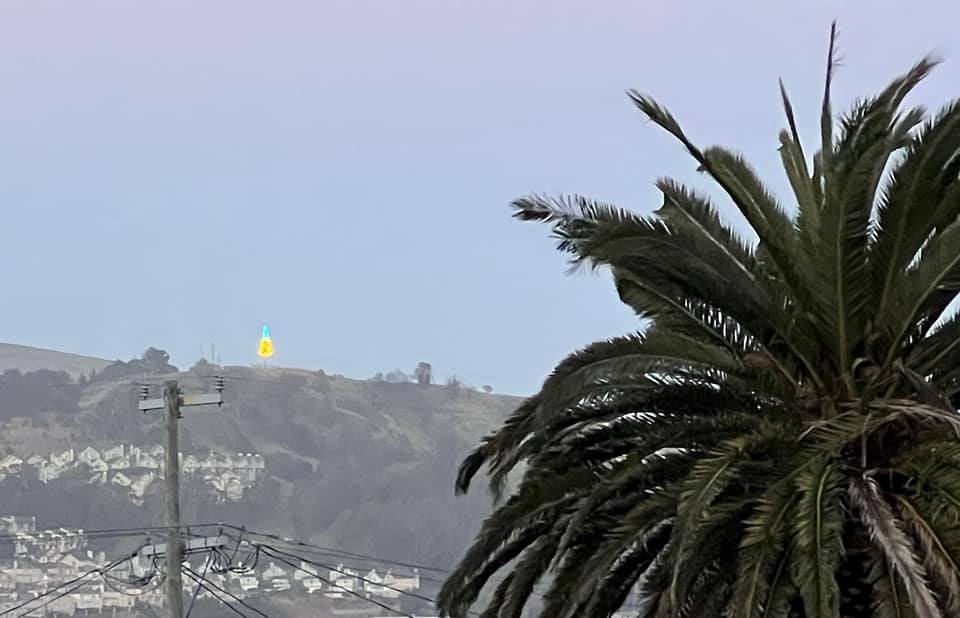 More updates from the Peninsula 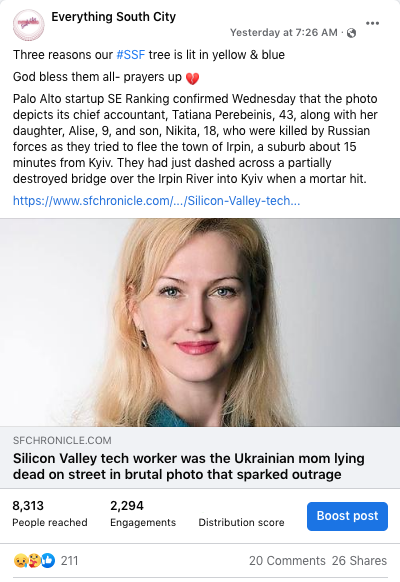 A few days later ESC learned the tragic news of Tatiana Perebeinis and her children, as we shared the SF Chronicle article:
We would later learn her husband learned of her death and the death of his children on his Twitter feed per the article in The Washington Post HERE.

Serhiy Perebyinis found out his family had been killed as much of the world did.

Photos flashing on his Twitter feed showed four people lying next to a World War II memorial just outside Kyiv after they were fired on by the Russian military. One of them was his wife, and two were his children.

What a shame people in south san francisco don’t do their homework, or supporting Neo NAZIS in Ukraine would be the last thing they would want to do. But when you are on a diet of american msm you will stay blissfully ignorant or world events.
Seeing what the Mayor and city council have done to your community I can see that they are as clueless as the folks who want to support Ukraine and the NAZIS.

The President of Ukraine is a Jew and comes from a family of Holocaust survivors. Stop mainlining Fox News Putin garbage.