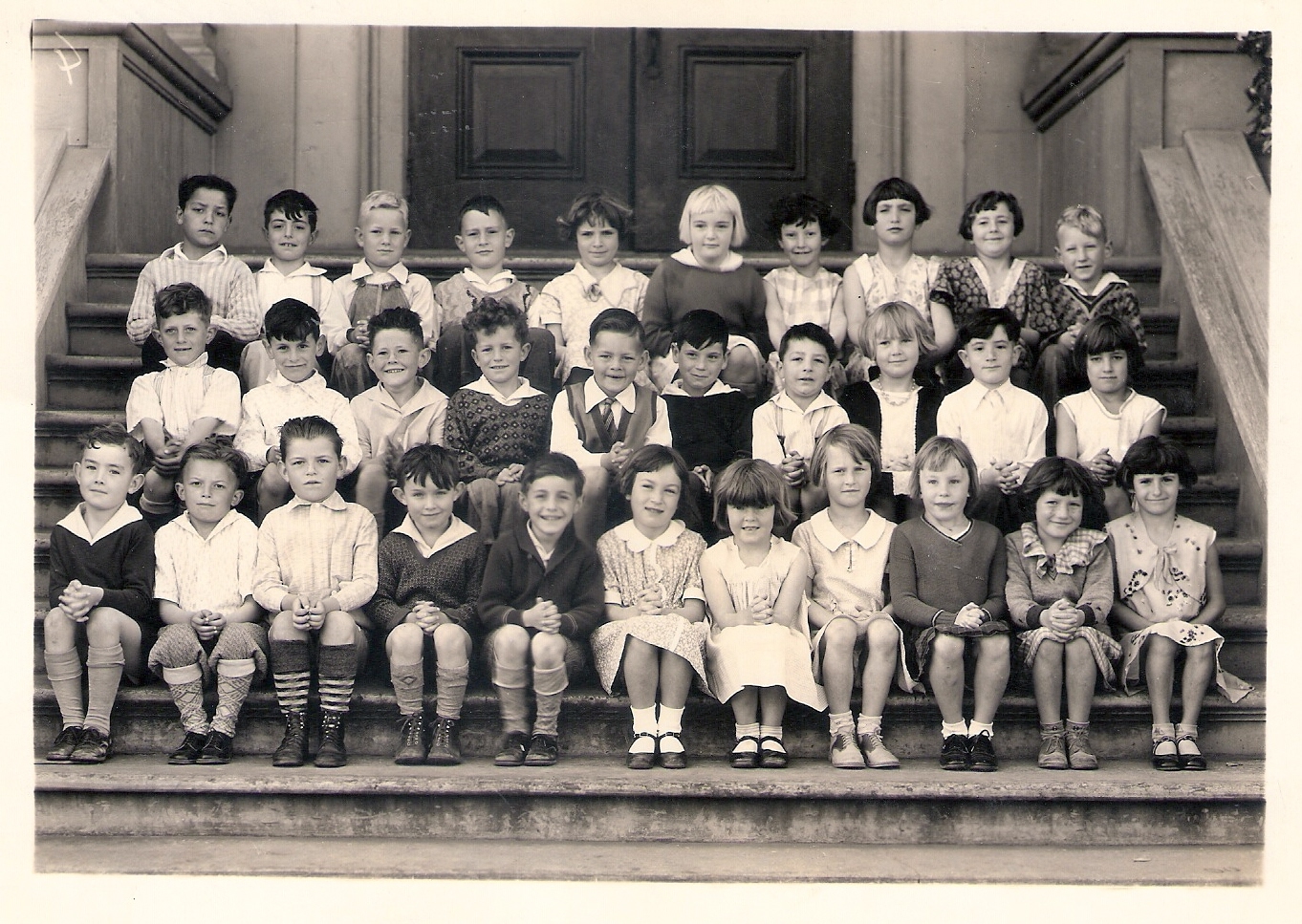 Russell is pictured here with his Kindergarten Class in front of what we now call Spruce Elementary. Russell is in the top row, 3rd from the left. Who else might you recognize from this photo?

My Dad, Russell Dale Brown, was born in Grand Rapids MN. on 17 June 1925 When he was a little over a year old the family, (Dad-Albert, Mom-Margaret, and 2 years older sister, Allegra), moved to California and bought a home at 1609 B Street in San Mateo.

At that time my grandfather sold insurance. In early 1930, my grandfather changed jobs and became a Prohibition Agent. Unfortunately, in June 1930, he was murdered while trying to close down an illegal bar. Within a couple of months, my grandmother sold the home and they moved into a rental at 657 Baden Ave. in South City, just blocks from my grandmother’s sister, Anna St. Louis, and her husband, Frank. (They lived at 209 Acacia Ave.)

So, my dad went all through school in South San Francisco, and his sister, who was 2 years older, started 2nd grade in South City and graduated with the class of ’41 there.  SSF high school was called a junior-senior school when my dad attended. It was grades 7 & 8 in one part, and grades 9 through 12 in another part of the building.  Dad was with the class of ’43.

Charles Sellick was the bank instructor. His brother was a barber. His sister was an opera singer who was murdered. Charles was killed when his boat exploded in Sausalito harbor in 1965. 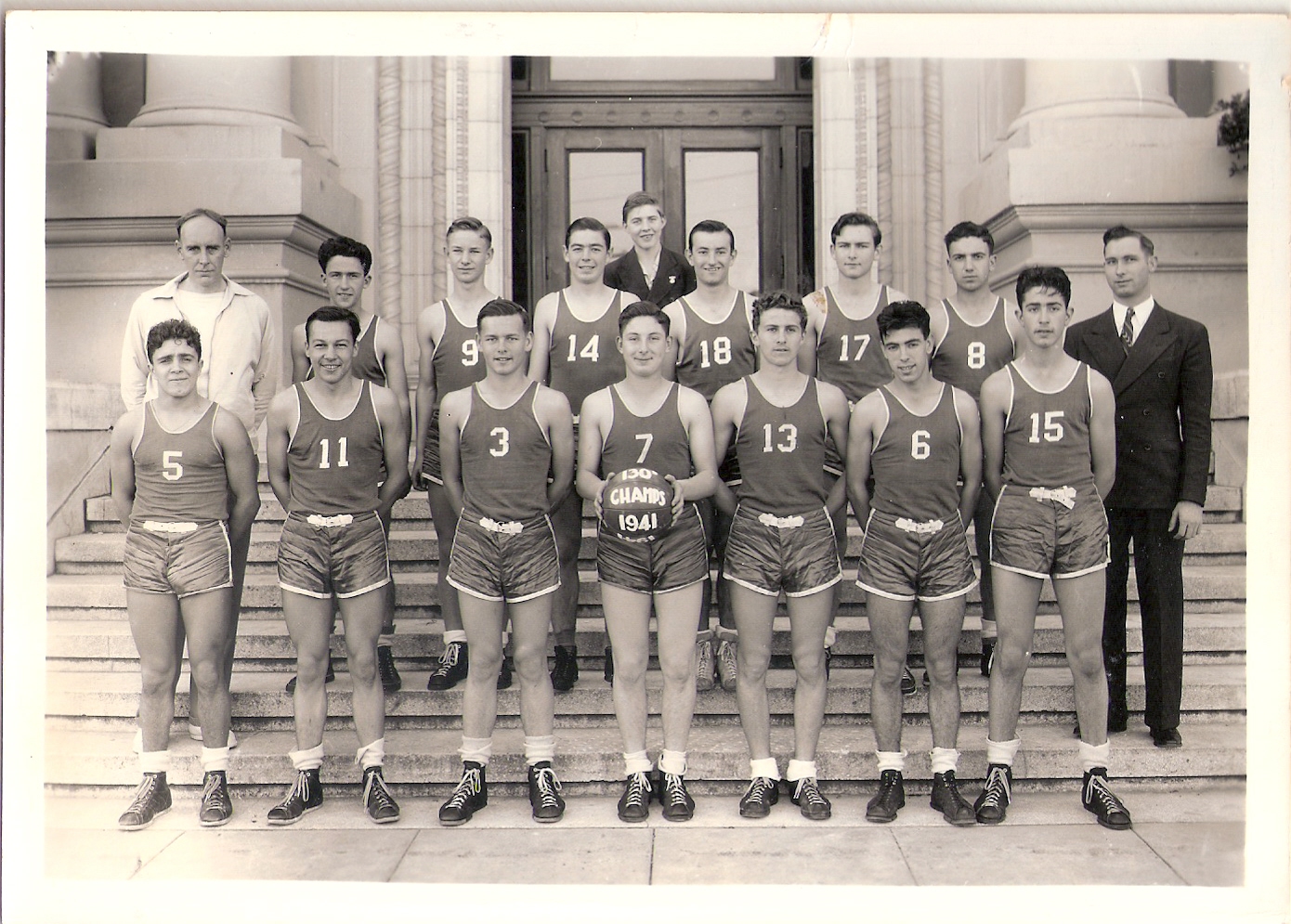 DePrado was a teacher in Grammar school. Charles Zipfel was one of his teachers. They called him “Zip”. Guthrie was his gym teacher. Laverne __?_ was his 1st-grade teacher, Mr. Gavin in 2nd grade. O’Malley was his Latin teacher. (*Russell attended the 60th reunion of SSFHS Class on 1945 years ago)

Dad couldn’t remember his kindergarten teacher but remembered she was related to my Welte family and was married to a McMills (Al Welte’s daughter, Evelyn, married Wallace McMills; Uncle Al’s first wife, Gladys, was the step-daughter of Dan McSweeney, who was mayor of SSF and an inspector for the Western Meat Company).

When in the 8th or 9th grade a new kid, George Ramsell, moved to SSF from San Jose and he and his family became friends with dad, and then our families were friends as well. 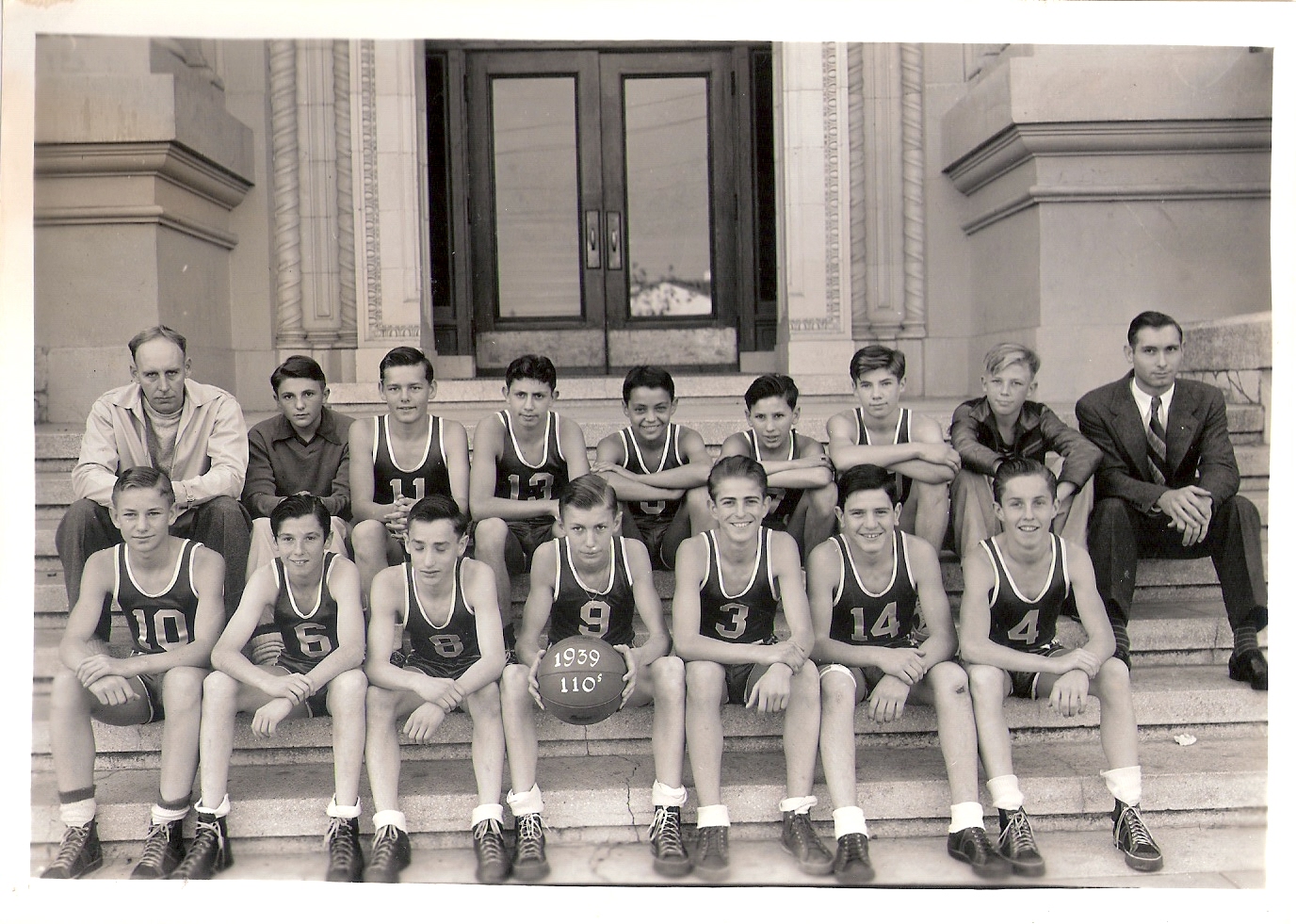 Elbert “Whitey” Smith was 2 years older than dad but he and dad and our families became lifelong friends. They hunted all over the San Bruno hills as kids. When Whitey married Jane Adler, they and their 2 boys used to go camping and hunting with us.  Probably his best friend was Aldo Padreddii. Aldo was a year behind dad in school. They would go fishing and hunting together and just hang out doing what boys did in the late thirties and early forties.

{Dad recently was in touch with Laura Padreddi, who’s 99 and living in Fremont. It was good for both of them to be able to reminisce about the “old days”, and especially about Aldo. He had to have been a very special person in my Dad’s life because I grew up hearing stories about him, how he was killed in the war, how they hung out as kids, drove around in my Dad’s car, that kind of thing}

Aldo joined the army in Aug. 1944; he was with the 411th infantry and was killed in action in march 1945. His brother, Leo was also a friend of the family as I was growing up. Dad and Aldo used to go across the bay to Niles (Fremont) and shovel manure on the Pessagno property. Aldo and Leo’s sister, Laura, married Gene Pessagno in 1940. Laura is living in Fremont.  She was in my Aunt Allegra’s high school class of 1941.

When Dad moved to Baden Ave. a kid down the block on the corner of Orange Ave. and Baden Ave.  (123 Orange Ave) that became good friends with dad was Roy Parenti. Roy and his wife Mary were lifelong friends. Another friend was Julio Malone. 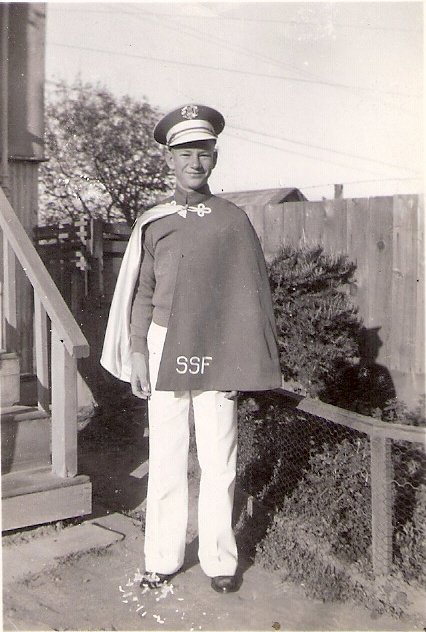 Russell pictured in 1939. He played clarinet and was in the SSFHS Marching Band.

My dad played the clarinet in grammar school and was in the band throughout his schooling.  He played basketball in school.  He bought a 1929 Model A when he was 16 for $49; he turned around and sold it for $50 and bought a 1938 Buick straight 8, which he says was a beautiful vehicle.

He worked at the Associated Gas Station, which was located down by the Bayshore Highway and Baden Ave. He also worked at the California Golf and Country Club cleaning the swimming pool.  When old enough his sister, Allegra, worked at the Sanitary Bakery on Grand Ave. (sad to see they sold after so many decades. I stop there any time I’m in the Bay Area).

South City was a town of about 5000 people when my dad was growing up there. It was a close-knit community and like all small towns, everyone knew everyone else. It’s probably still that way for the core part of town.   Many were Italian immigrants who took advantage of the fertile soil and raised various crops on what was called truck farms.

There were also the Swift Western Meat packing plants, a steel plant, and a lumber company where people were employed. The month before Dad was to graduate high school he quit and joined the Army Air Corps.  That was in May 1943. He did go back and finish his schooling and got his diploma from South City High in 1947. 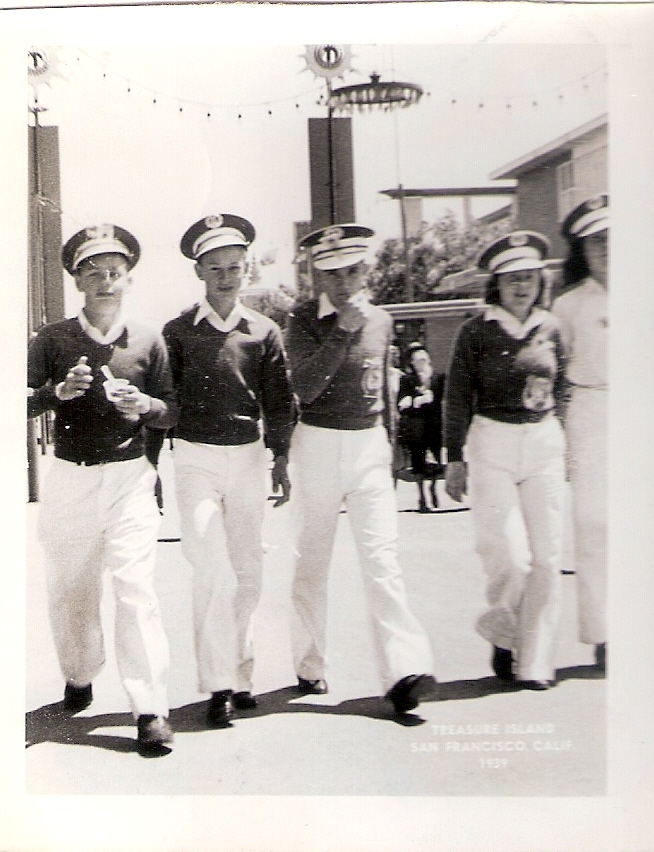 Russell is pictured here with SSFHS friends in 1939.
Who can identify this group?

Because it was the depression and my family was in perilous circumstances, what with my grandfather being killed, my grandmother went to work as a domestic for the Henry Haaker family for a while. Henry was VP at the local bank (Bank of South San Francisco I believe) and later had an insurance agency.

Henry Haaker’s son Lee was a friend of my Dad’s and the family insurance agent (Lee’s son lives in Gilroy I believe). Henry’s brother, George, worked in the meat packing industry and he and his wife Maude were best friends with my mother’s parents. My grandfather worked in the meat packing industry with George for years.  George’s son, George Jr. was a friend of my mother’s. He died of a stroke in 1963.

Ross and Jack Meyer were related to the Haaker family. Ross was older than dad, was a navy pilot and instructor. After the war he flew for Pan Am. His brother Jack, who was a year older than my dad, was a medic in the service. He died of cancer years ago.  He owned a cement business and had 2 daughters..

Other family names that my dad, his sister and mother knew were: Ted Pretzer, Aldo Minucciani, and Robin Castonia married my dad’s cousin Anna Rose St. Louis. Ted was a very dear friend of the family and is very missed.

Ed Kaufman was head of the bank. She then worked at the Tasty Bakery on Grand Ave. The hospital was located on Grand Ave. Pete Linn had a meat market on Grand Avenue and used to deliver meat in a wagon to people’s homes.

There was also a fish monger who used to honk his horn and sell fish up and down the streets in his cart. And there were fruit and vegetable trucks who sold that way also. It was like having Amazon Fresh without the internet.

The dentist they used was Bacigalupi. He knew the Hickey family, W.L. Hickey & son Jack had a plumbing shop at 369 Grand Ave. There was an Inks Company and a paint company in town too.

The Valencia family were friends of ours. Tony dated my Aunt Allegra at one time, and she became best friends with his sister, Isabel, who was also my mother’s best friend.

After the war, my dad was working at a Shell gas station where my mother always got gas. Mom’s cousin, Homer Gibbs, set up a blind date for my dad at the Claremont Hotel in Oakland and it turned out to be my mother. After 6 weeks he proposed and 6 weeks later they married in South City (Mom was 5 years older than dad and said she wouldn’t marry him until he was 21. He had to get his mother’s permission to marry because in those days you had to be 21 without permission).

My mother was related to the Welte Family; her mother, Marie was sister to Al Welte, the Fire Chief, and Carl “Jazz” Welte, the owner of Welte’s Bar downtown.) After they married they moved to 5th Ave in San Mateo, where we lived until 1964.

We Greatly appreciate Russell’s daughter, Ms. Dale L Amann, for the email conversations and her compiling this incredible wealth of the lives and times of her father, and those who lived in South City, in the 30’s and 40’s.

Wonderful nostalgic story. The mention of Leo Padreddii brings me back to my youth in the early 1970s when I lived near him when he lived on A St with his mom. That was when he decided to run for SSF City Council and I helped him by walking local neighborhoods (precincts) and passing out voter information. Of course he won handedly. He had been a SSF police officer years before then and he was well known within the community. Later the city named a new residential street after him off of Hillside Blvd and he would eventually reside on that street named in his honor, Leo Circle.