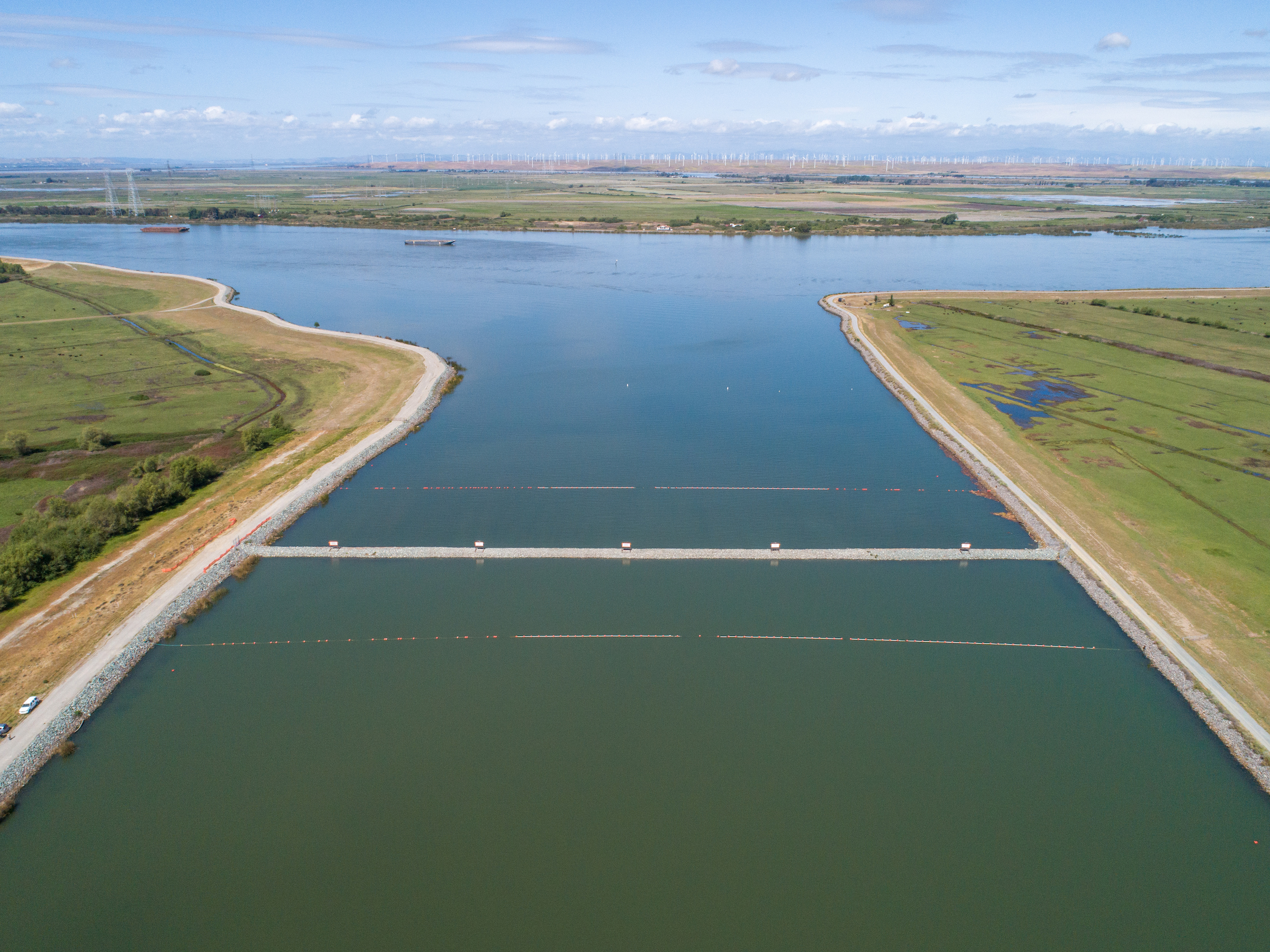 The completed Emergency Drought Salinity Barrier on the West False River near Oakley in the Sacramento-San Joaquin Delta in Contra Costa County, California. The 750-foot-wide rock barrier is in place to help deter the tidal push of saltwater from San Francisco Bay into the central Delta. Photo taken April 20, 2022.
Florence Low / California Department of Water Resources, FOR EDITORIAL USE ONLY

The draft EIR looks at the impacts of installing a drought salinity barrier if needed along the West False River in the Delta twice within a 10-year timeframe. The barrier, which would remain in place for up to 20 months, would improve long-term planning and provide the State with greater flexibility to respond to future droughts, which are growing more frequent and extreme due to climate change.

The existing drought salinity barrier along the West False River, which was installed in 2021 following Governor Newsom’s executive order, has helped to prevent saltwater contamination of fresh water supplies used by tens of millions of Californians. The barrier also helps preserve critical water supplies in upstream reservoirs for later use by reducing the amount of water that must be released into the Delta to repel salinity during the dry summer months.

The draft EIR does not affect the existing emergency drought salinity barrier along the West False River.

“As California prepares for the possibility of a fourth dry year, these are the types of actions needed to adjust to more frequent, extreme droughts such as the one we are experiencing now,” said Ted Craddock, Deputy Director for the State Water Project. “Climate change is having a direct impact on our water supply, and we need to take a proactive approach to prepare for future droughts and protect our State’s fresh water supplies.”

The release of the draft EIR kicks off a 45-day public comment period from now until August 22, during which time members of the public will have the opportunity to review the proposed project and provide comment. DWR will host a virtual public hearing on the draft EIR on July 27. Details on how to join the meeting will be made available on the project’s website prior to the event. Information will also be posted on DWR’s social media channels.

The existing emergency drought barrier is scheduled to be removed by November 30, 2022 as conditions allow.

about time something is done about our water supply. 75 years too late. as the population
grew no one has done a thing. during heavy rain the excess flows back to the ocean !
stupid. during the worlds history there has alway’s been droughts and floods way
before the so called man made climate change. it’s called Mother Nature . there is
no controlling it. sick of these climate freaks. I don’t think the governor paid attention
in school. or the hair gel creeped into his brain. we need smarter leaders in Sacramento