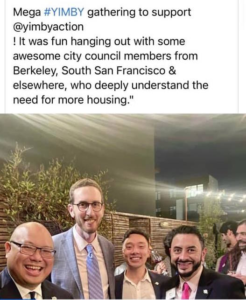 The past few months we have received multiple inquiries regarding the Brown Act and on election legalities which we put forth to Rosa Govea Acosta, our City Clerk

Below is this conversation and we greatly appreciate Rosa’s immediate response. We hope this information resolves any questions our community may have had regarding these issues.

When the city transitioned from at-large elections to District elections in 2018, the City Council approved the following residency requirements. The information is also available in the city’s Municipal Code Chapter 2.16 Municipal Elections and can be found here:  https://library.qcode.us/lib/south_san_francisco_ca/pub/municipal_code/item/title_2-chapter_2_16?view=all

2.16.030 District-based electoral system requirements.
(b)  Except as provided in subsection (c), each member of the city council elected to represent a district must reside in that district and be a registered voter in that district, and any candidate for city council must live in, and be a registered voter in, the city council district in which that candidate is seeking election at the time nomination papers are issued to that candidate pursuant to Government Code Section 34882 and Elections Code Section 10227. Termination of residency in a district by a member of the city council shall create an immediate vacancy for that city council district unless a substitute residence within the district is established within thirty days after that termination of residency.

A person is not eligible to hold office as a member of a municipal legislative body unless he or she is otherwise qualified, resides in the district and both resided in the geographical area making up the district from which he or she is elected and was a registered voter of the city at the time nomination papers are issued to the candidate as provided for in Section 10227 of the Elections Code.

As the City Clerk, I did a preliminary verification of candidate eligibility by verifying residency with voter data provided by the San Mateo County Office of Elections. Once I determined they met the eligibility requirements, I issued nomination papers, as done with Mark Addiego and Eddie Flores.

Since our election is consolidated with the County, once candidates filed their nomination papers, I forwarded those documents to the San Mateo County Elections Office, which verified the candidates and determined if they qualified for office.

This question comes from Flores’ appointment application in 2020 stating he would not be seeking election in 2022,  which is attached. 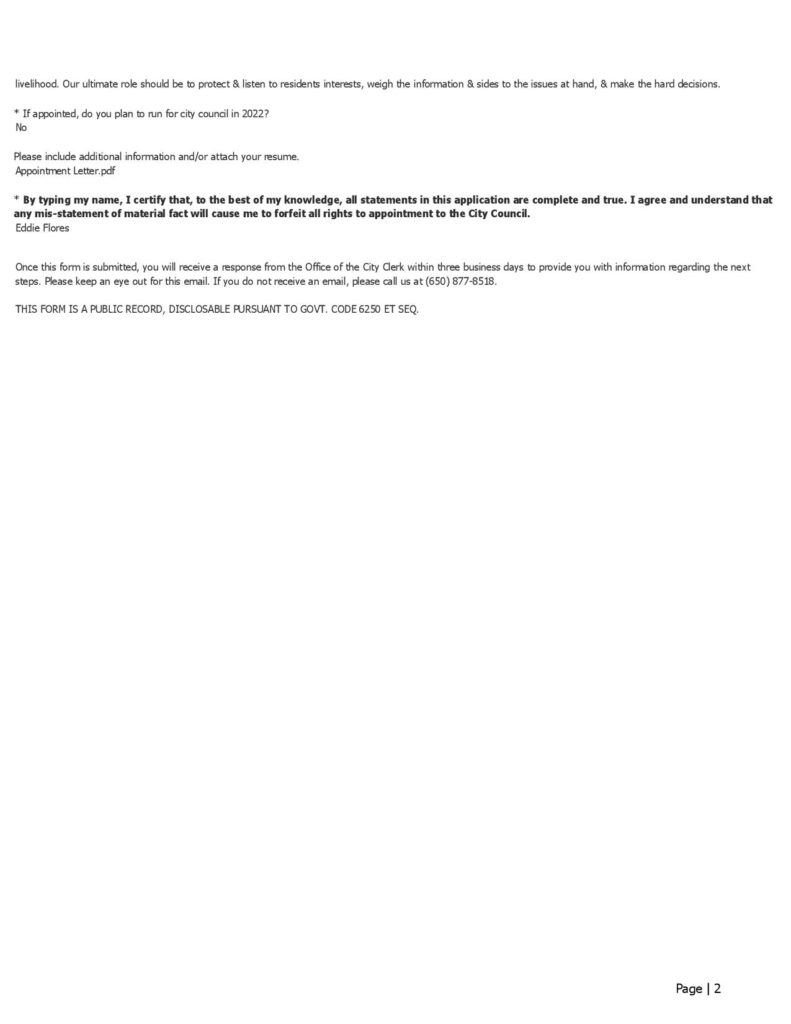 Any member of the public who is not disqualified by the Constitution or laws of the State from holding a civil office and meets the following requirements can run for public office in South San Francisco:

The City Council did not create any different rules for applicants who stated on their questionnaire that they didn’t plan at that time to run for City Council. I am unaware of a legal document or law that prohibits those applicants from changing their minds and deciding to run for office.

As you know, the Brown Act was enacted in 1953 to guarantee the public’s right to attend and participate in meetings of local legislative bodies and as a response to growing concerns about local government officials’ practice of holding secret meetings that were not in compliance with advance public notice requirements. The Brown Act is pivotal in making public officials accountable for their actions and allowing the public to participate in decision-making.

While the City Council abides by the Brown Act, there are certain exceptions that allow a quorum of the City Council to gather, such as Conferences and retreats, other public meetings, meetings of other legislative bodies, and social or ceremonial events. These are exempt from the Brown Act provided that legislative members follow certain rules, such as limiting the discussion to the agenda in the conference; or that legislative members do not discuss the business of their legislative body amongst themselves. Regulations for these exceptions to meetings are contained in § 54952.2(c). Also excluded from the application of the Brown Act are individual contacts or conversations between a member of a legislative body and any other person (§ 54952.2(c) (1). Any other person is defined as a non-staff or non-board member.

It was fun hanging out with some awesome city council members from Berkeley, South San Francisco & elsewhere, who deeply understand the need for more housing” 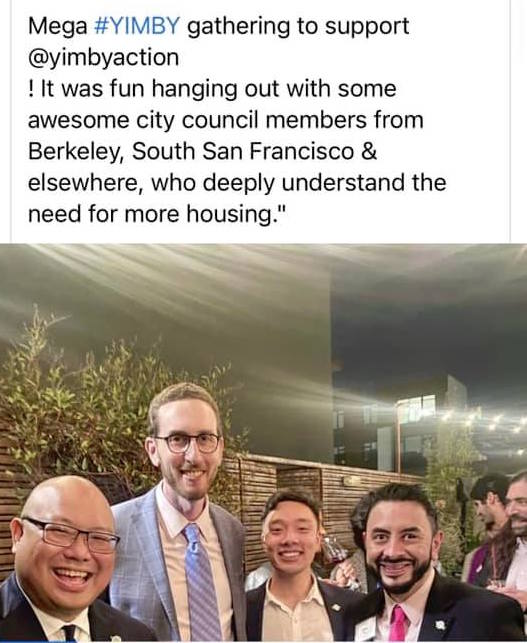 Weiner is EXACTLY that, in my opinion! He is one of the reasons why CA has gone off the cliff. I, personally, would not get 50 feet within this man!

Where did Addiego reside before moving to District 1?

clown show. I think I just threw up in my mouth a little . wish you would not show
these creeps. we know what they look like. (democratic socialist) ya whatever .

Well, we can always count on Rosa to give a comprehensive explanation for questions posed by concerned citizens. The council has proven incapable of answering any questions posed to them. She and the City Clerk’s Office are one of the few bright spots in a city government that gives us little to be proud of. Rosa already has quite a work load and I’m only glad that the questionable ethics of our city officials are not under her purview. If that were the case, she would need to keep the office open 24/7.