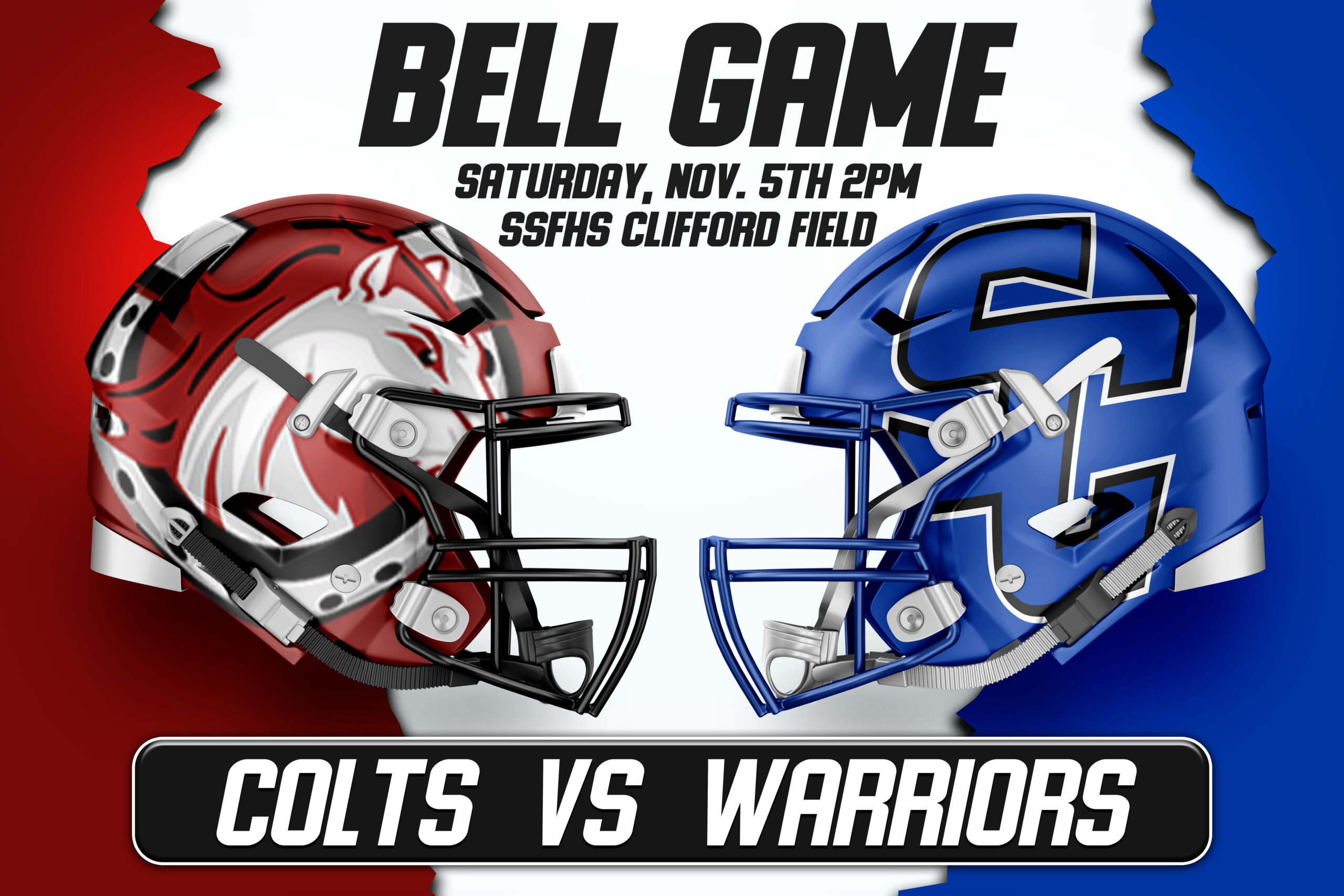 NOTE: TICKETS MUST BE BOUGHT IN ADVANCE ONLINE CLICK HERE!! 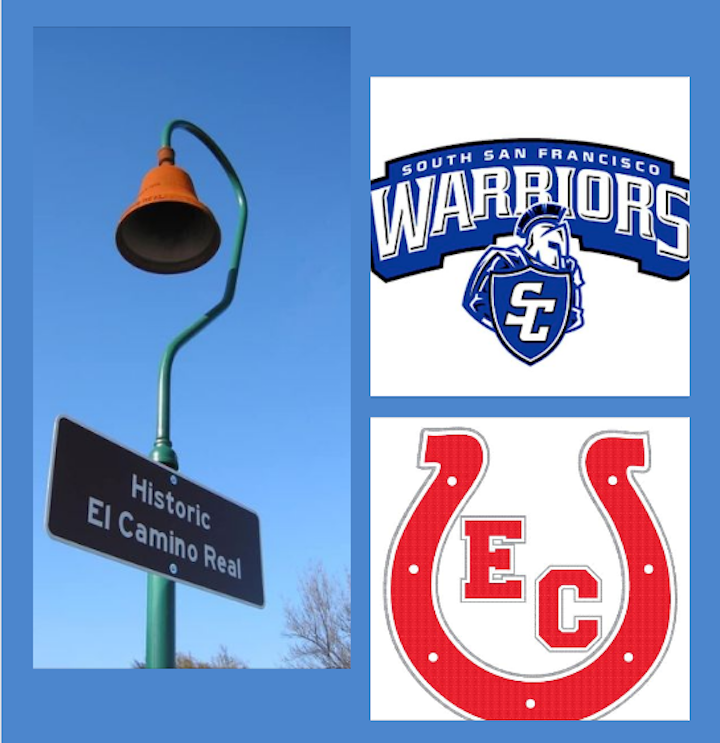 – -What I know about the Bell Game- -by Coach Jake

Mr. Keropian EC’s first Principal from 1961-1988 told me the Bell Trophy was sponsored by the SSF Lion’s Club, and the Bell was chosen to replicate the Mission Bells which are found up & down the 700 mile historic California Mission Trail, aka “The Royal Road”

The Bell Game has been played since 1962. In that first year the score was 32-0 Warriors. In 1963 The Warriors won 8-2…. El Camino would not score another point for Eight Seasons until 1972. The Colts lost 21-7 but legend has it that The EC Fans as well as the Northern Part of town went NUTS!!!!! Celebrating the first ever touchdown against the Warriors. It took El Camino TEN SEASONS to score its first touchdown against the Warriors…

I went both ways as a Junior and recovered a fumble on our own one yard line. Thank God

Shawn Scott called his own number and ran for a fake Punt first down to keep the game winning drive alive. & I’ll never forget our QB Jay Lee (Blanket Award Winner) running for key yardage on our game winning drive. The Colts Win The BELL!!!!!

My Senior year SSF said they had a surprise for us. They came out in pre-game in their practice uniforms. Then they left and came back out in all Black uniforms, with Bells on their sleeves w/ dashes for how many times they have beaten us since 1962. I hated those black uniforms & we lost in 1987.

I was there as an assistant coach in 1990 when somebody put a pipe bomb in the scoreboard and it blew pieces of metal out to the 30 yard line. Thank god the ball was on the South side of the 50 & no one was hurt. I was standing next to Louis Simondi when it went off. Steve said right after, “now there’s something you don’t see everyday”. I played for CCSF that night and I tore my ACL vs. DVC but I finished the game.

I was there in 1999 when SSF RB Luther Mason had one of the best ½’s of football I’ve ever seen before or since, but we held them off for the win. The Colts Win The BELL!!!!!!!!

My first and only Bell game victory as a head coach was 2003. The toughest part was getting outta there due to some dust-up at the conclusion of the game. The Colts Win The BELL!!!!!!!!!

In 2013 we played our first ever Bell Game at El Camino’s Colt Field. What should have been one of the happiest days of my life was by far the worst. I can still see the kick sail Wide Left as we lost SSF 29 – EC 28. I’ll never get over that game in 2013. 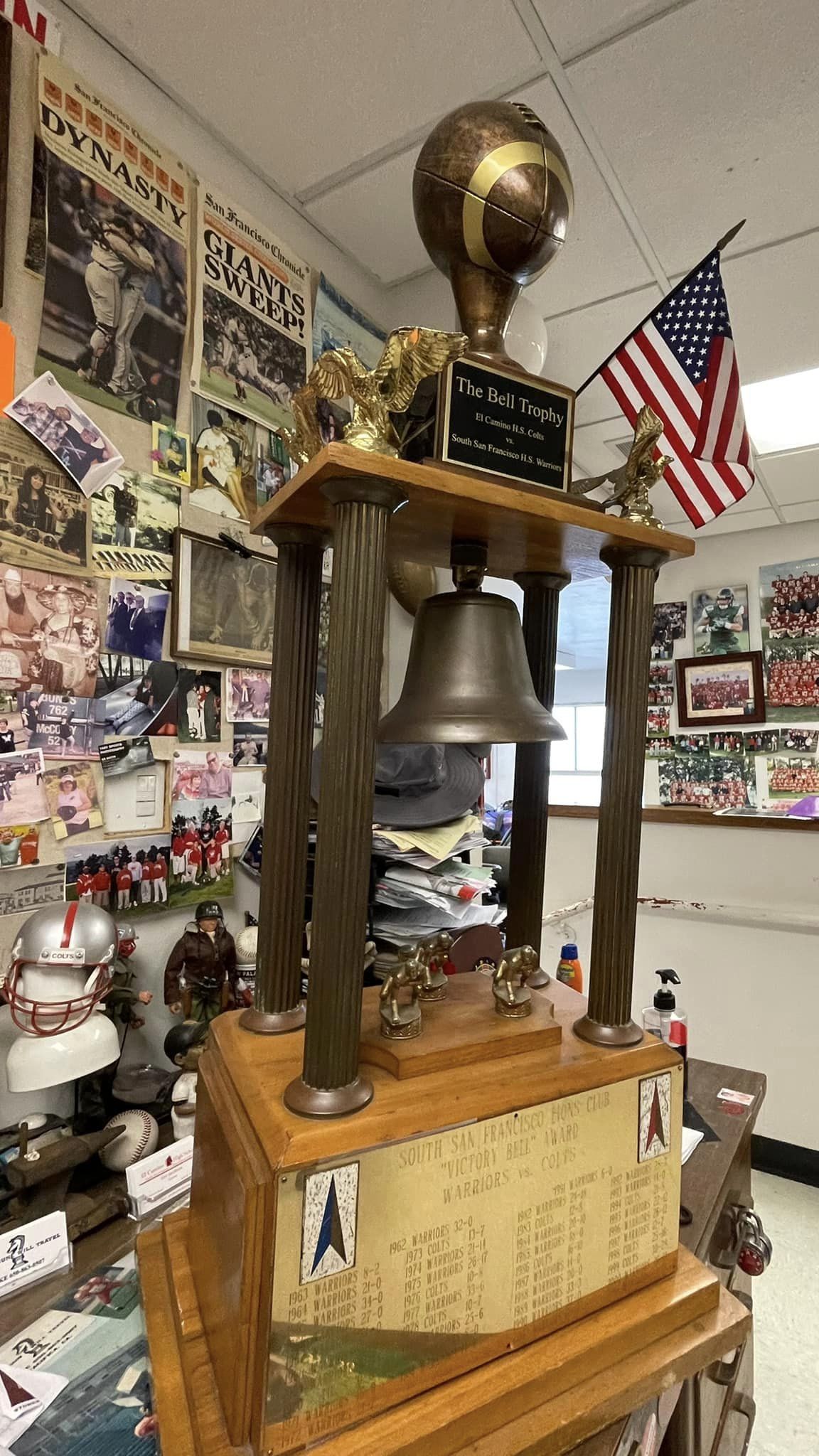 Where will the BELL live after this Saturday?

Rooting for South City Warriors, but really, just want a good, clean, and safe game for both teams. Both SC and Elco are doing great this year and this brings pride to our beautiful Hometown. May the best team win. And if you have never been to a game, you need to see the South City Marching Band and Color Guard Performance as they alone are worth the price of admission. Go Warriors!

You said it Hogan. Come out and cheer the home teams! So. City Pride on display.