The autumn months really bring about dramatic skies from huge billowy clouds to full moons and we are fortunate to have some great professional photographers locally as well as some incredible neighbors who have also captured the show above us.

South City resident and professional photographer Roger Cain shared these photos with us on December 8th, about an hour apart.

With clear skies in our area tonight, along with a full moon, there was a lunar occultation with Mars where the moon passed in front of Mars. Two photograpghs taken tonight as viewed from SSF by Roger Cain. The first shows Mars at the lower left, it vanishes behind the moon and about an hour later reappears in the upper right corner. More information on this lunar event can be found on this link HERE. As a note, today 50 years ago, was the last Apollo 17 launched mission to the moon. 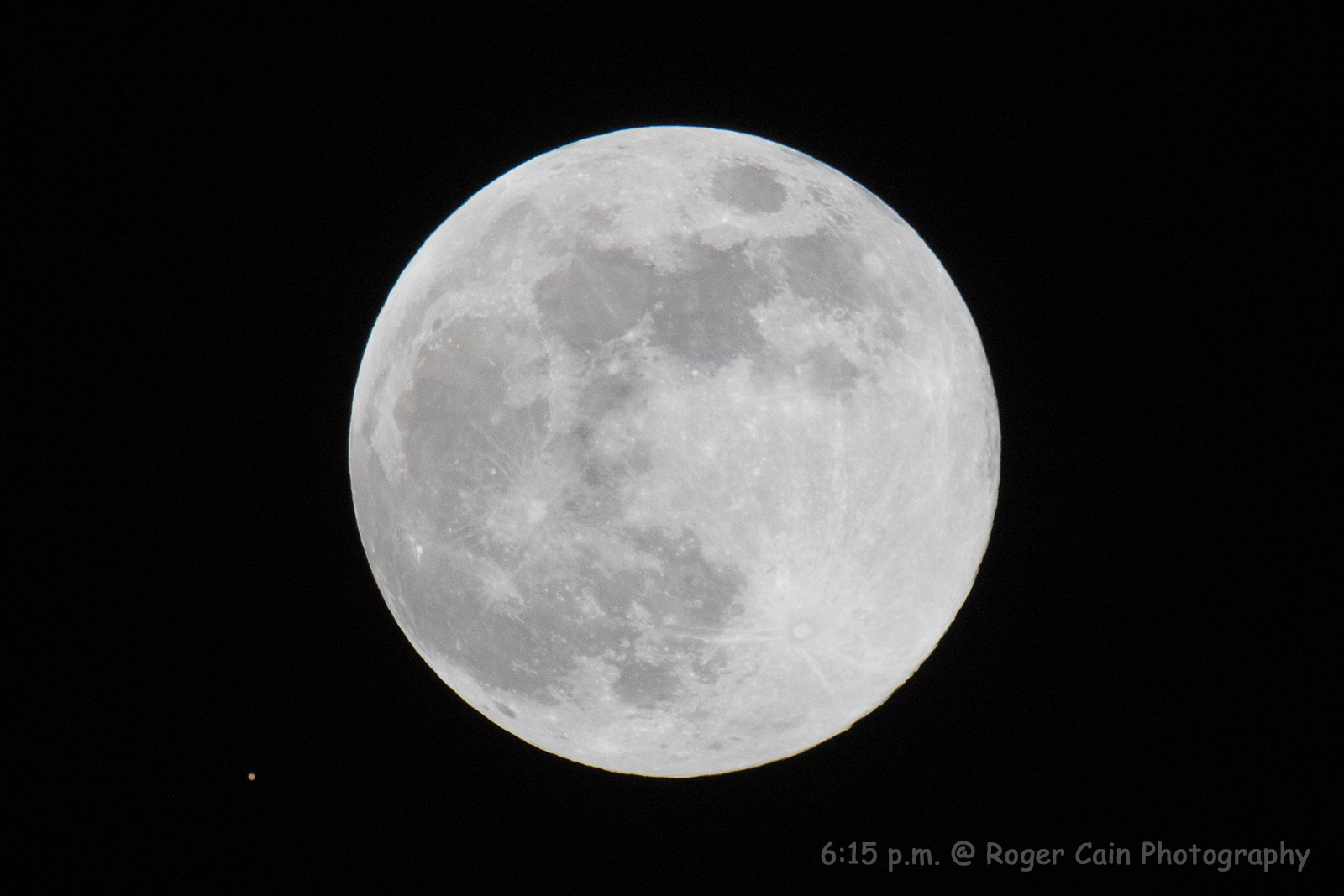 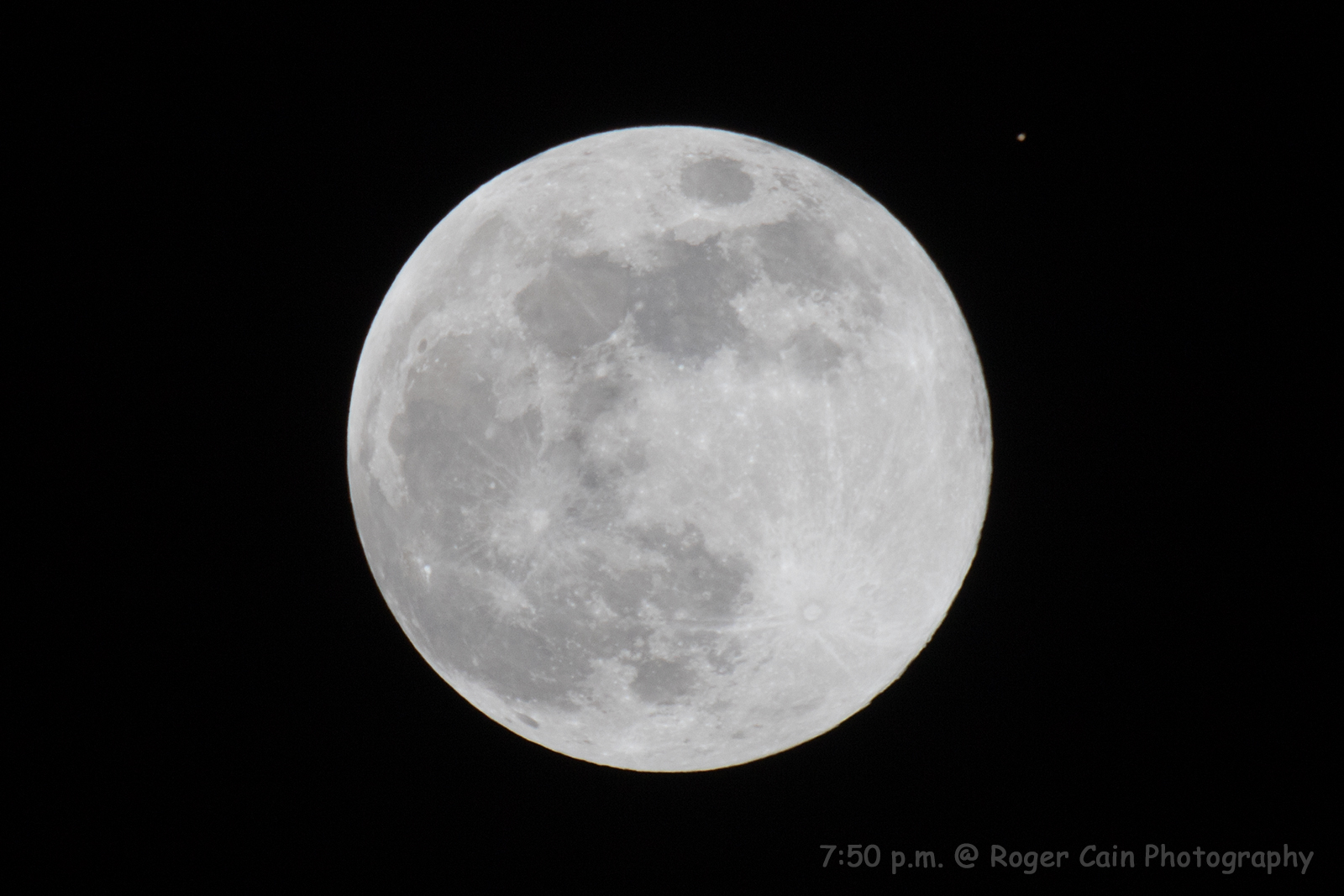 Local neighbors appreciated these photos on our social media and the following were shared with us as well. 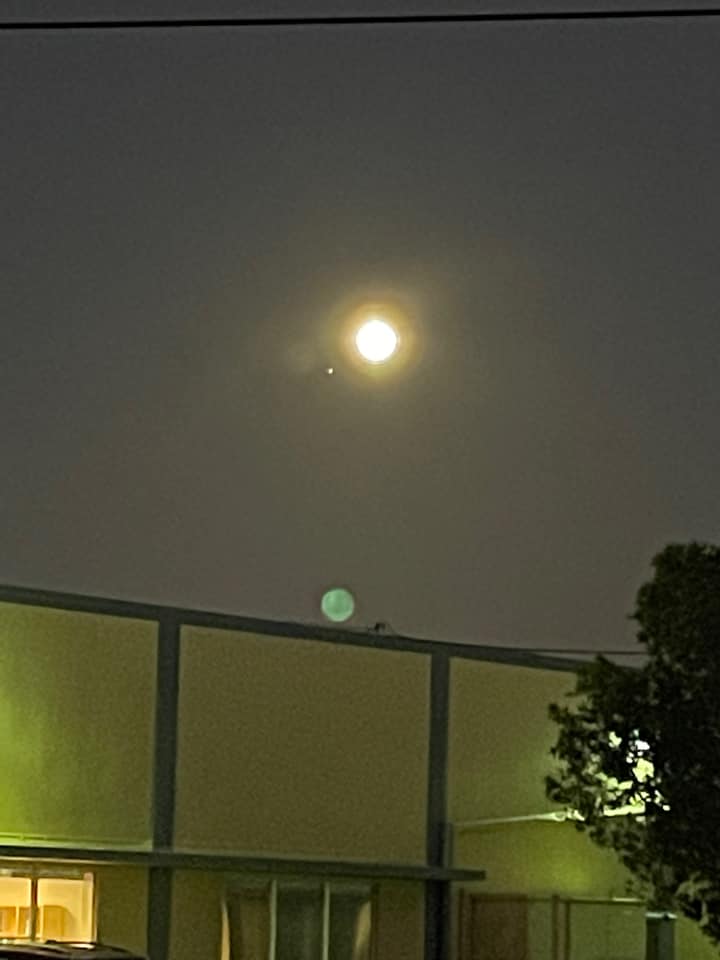 “Here’s mine from SSF with my telescope!” 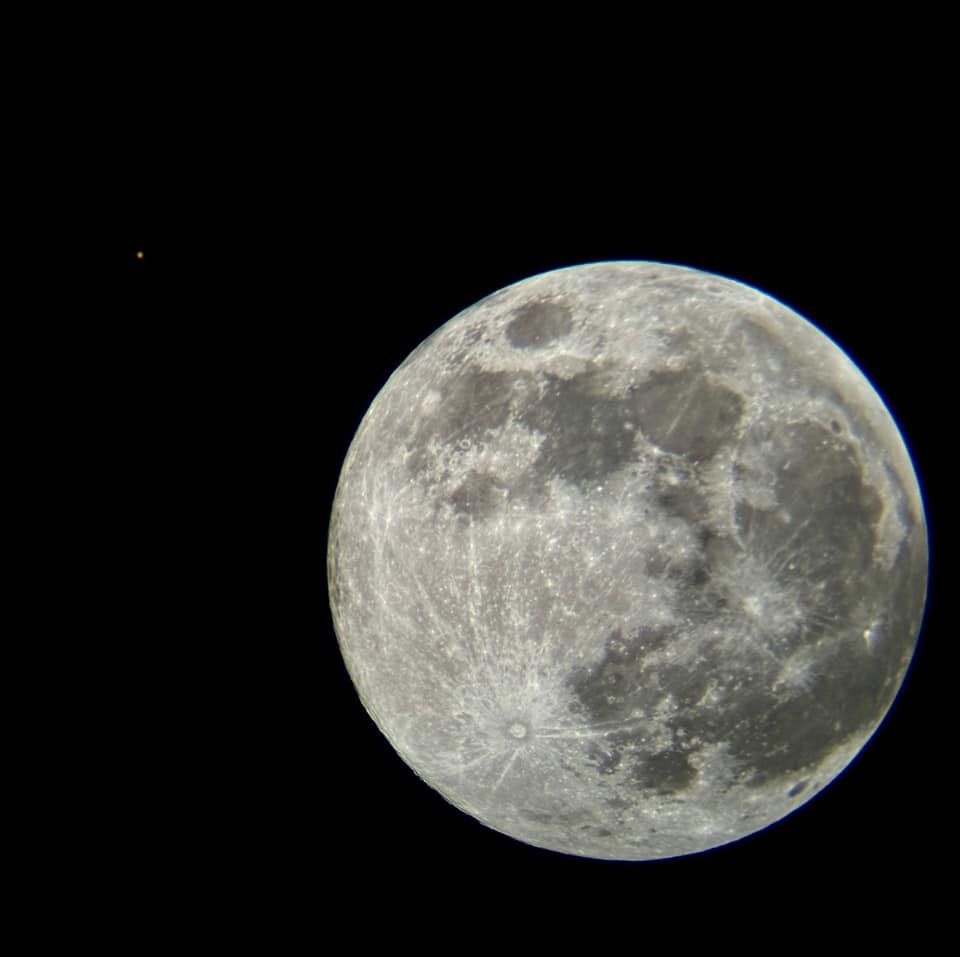 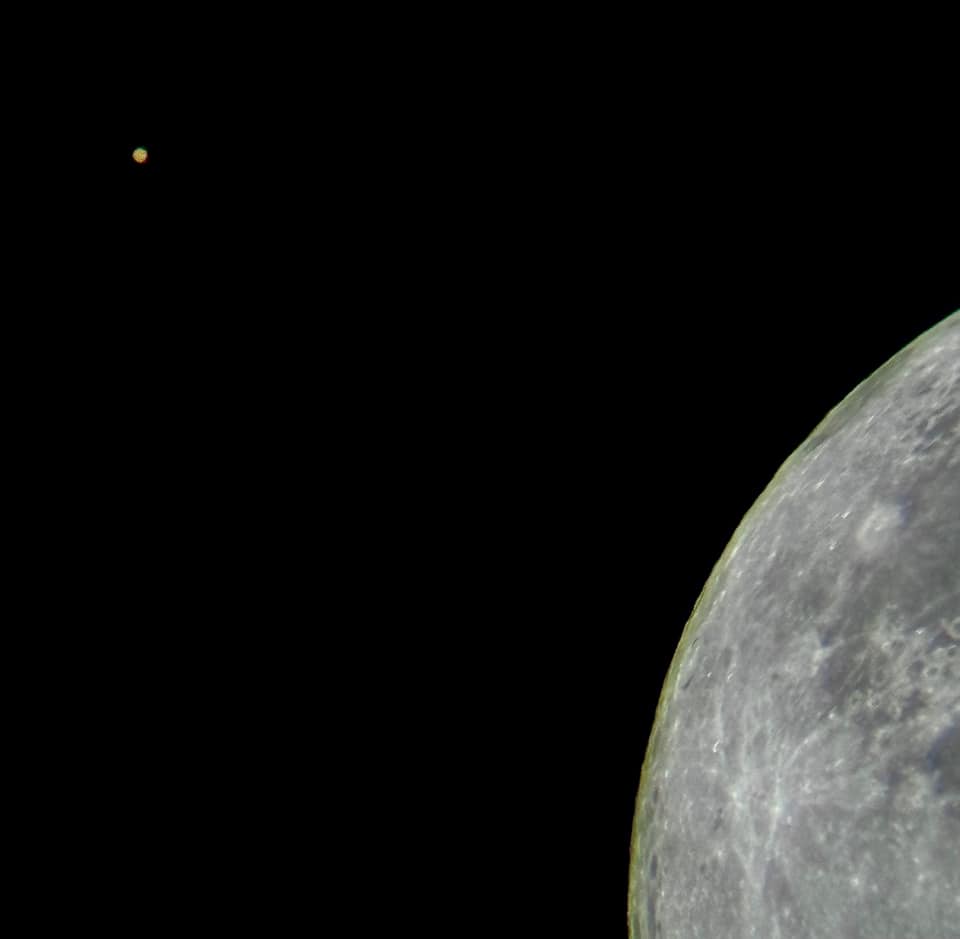 And from professional photographer Mel Ellison, the earlier moon rise from the east

Beautiful moonrise last night…in the last pastel-hued light of the day, with Mt. Diablo in the distance.” 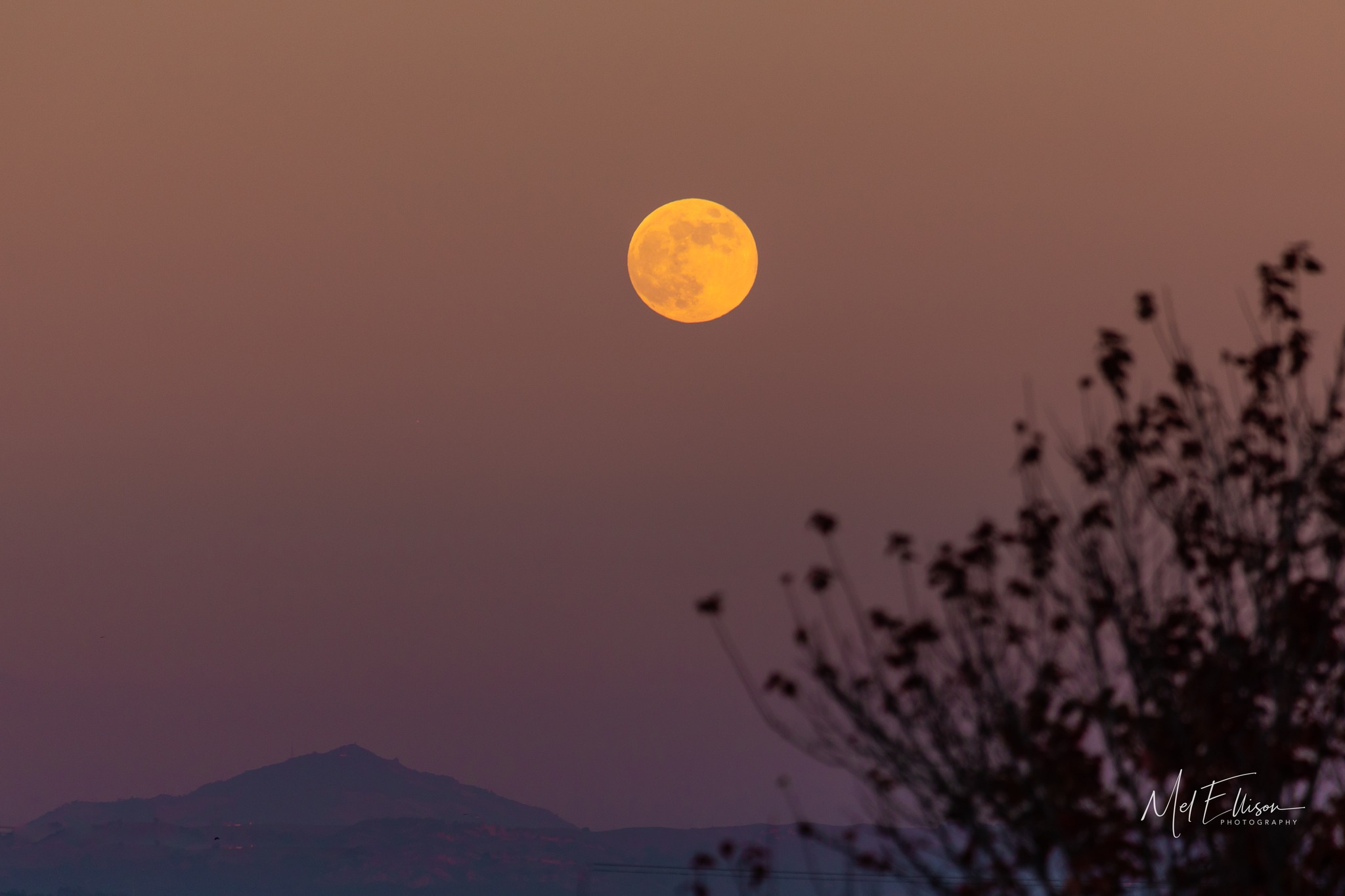 Another beauty from Mel Ellison 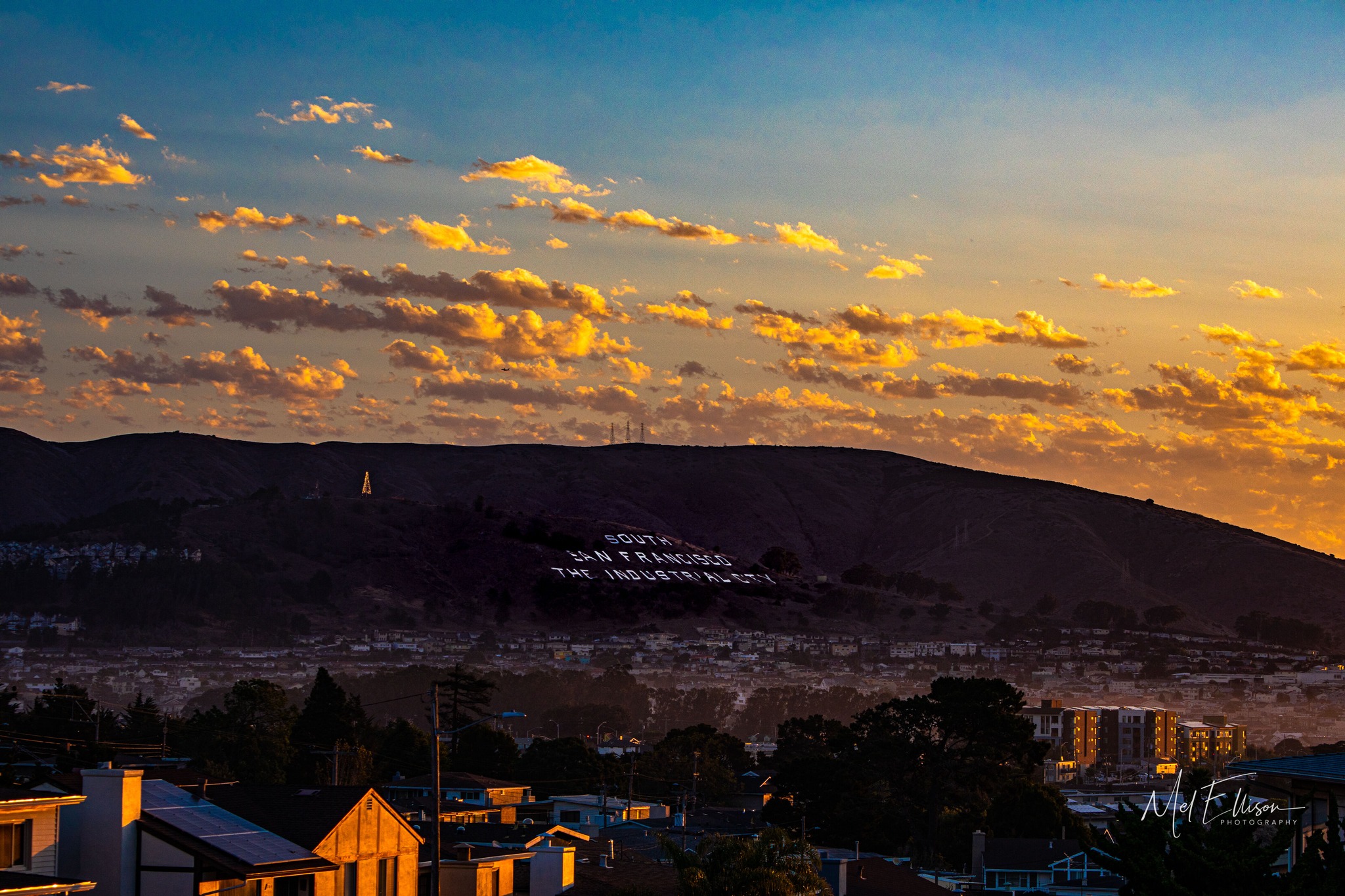 Sunrise in September from Avalon Park

And from our Brentwood neighbor, Cindy Alger, catching the sweet sunrise over See’s Candies 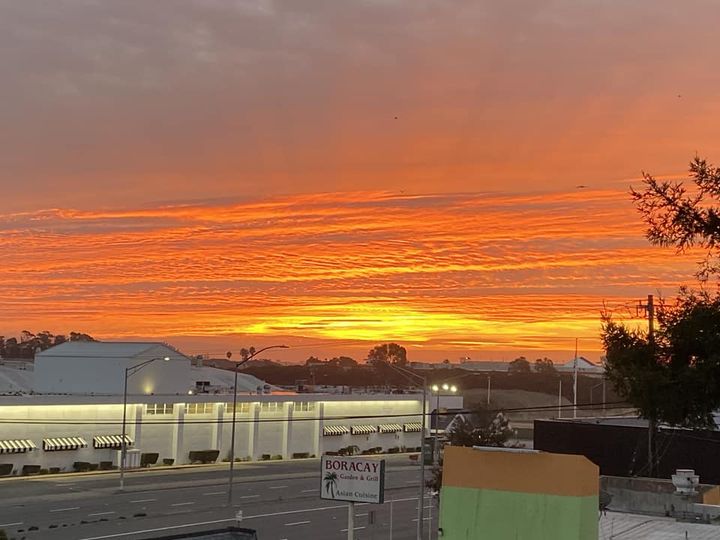 Out my window this morning, with a 300mm lens…

The strong lens compresses the image, making things appear closer together than they are…. 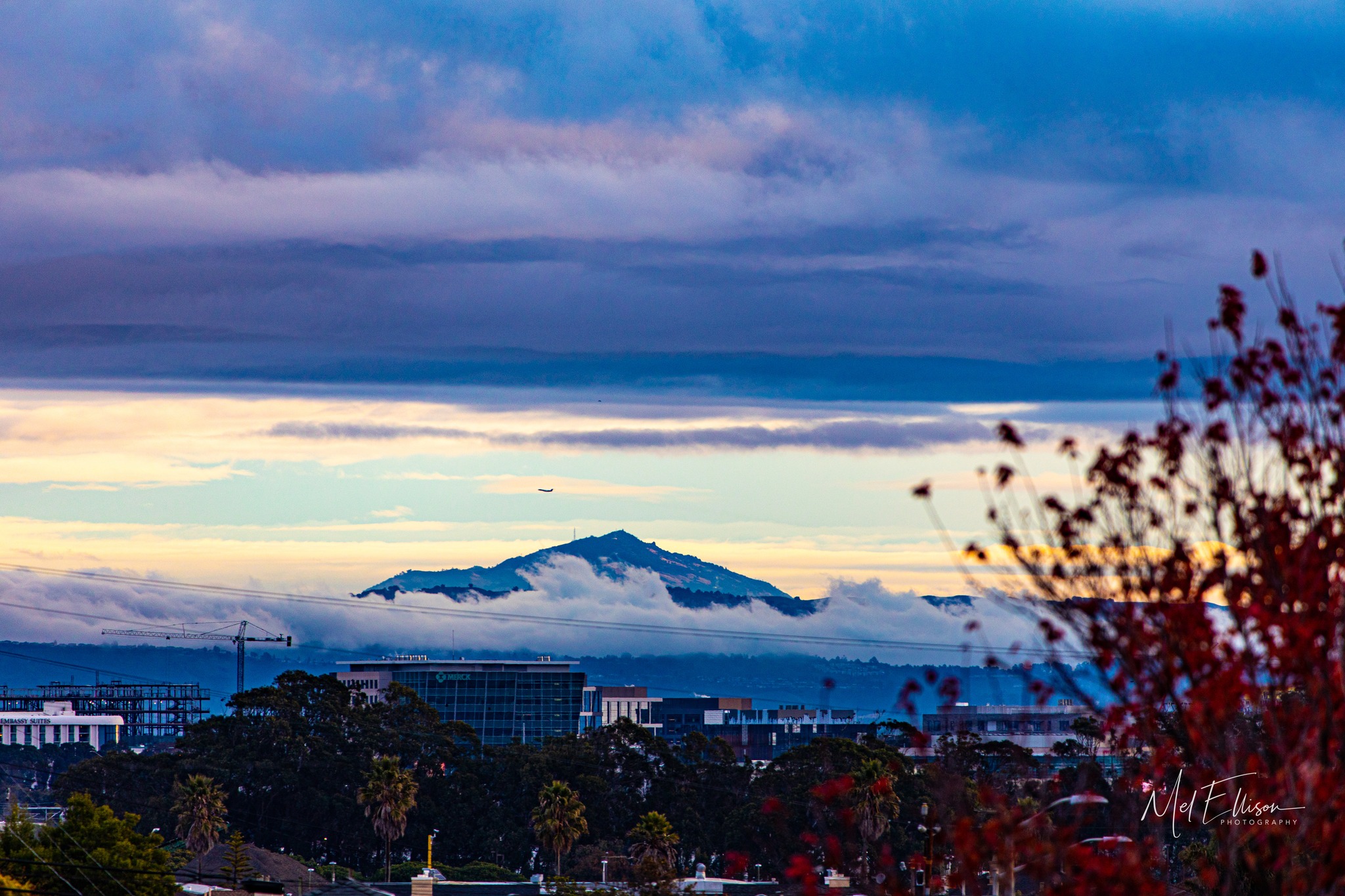 Out my window, over coffee…..

37° this morning as I headed out the door at 5am. If you live in certain places like NYC or Idaho, that may not seem so cold….

But here in SSF, it’s cold….and as soon as I begin my morning 3+ mile walk, I can tell immediately just how cold it is by the layer of frost forming on the rooftops of houses and cars….and of course by Lynn’s warning as I exit the premises to “…watch out for icy sidewalks!” As if I would ever trip and fall!

Well, actually it does happen on rare occasions….bumpy, uneven sidewalks are to blame usually….but that’s a whole other story for another day. There is nothing like an early morning vaudevillian pratfall to get your undivided attention though, I can assure you.

Speaking of days, I hope you have a great one…..and able to enjoy it to the fullest. 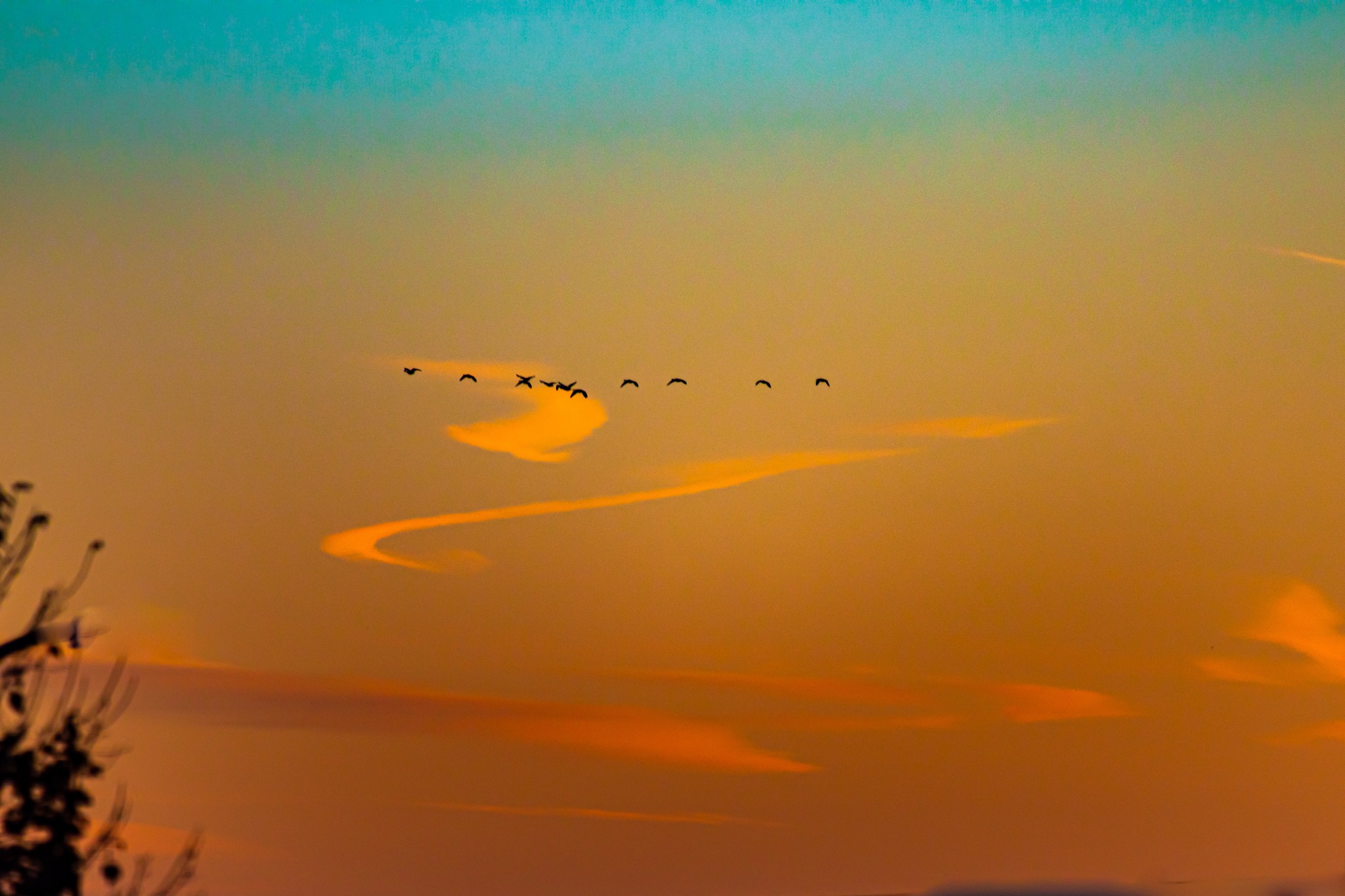 And from November 27, 2022, Mel Ellison shares this reflective photo – and essay, of loss and beauty. 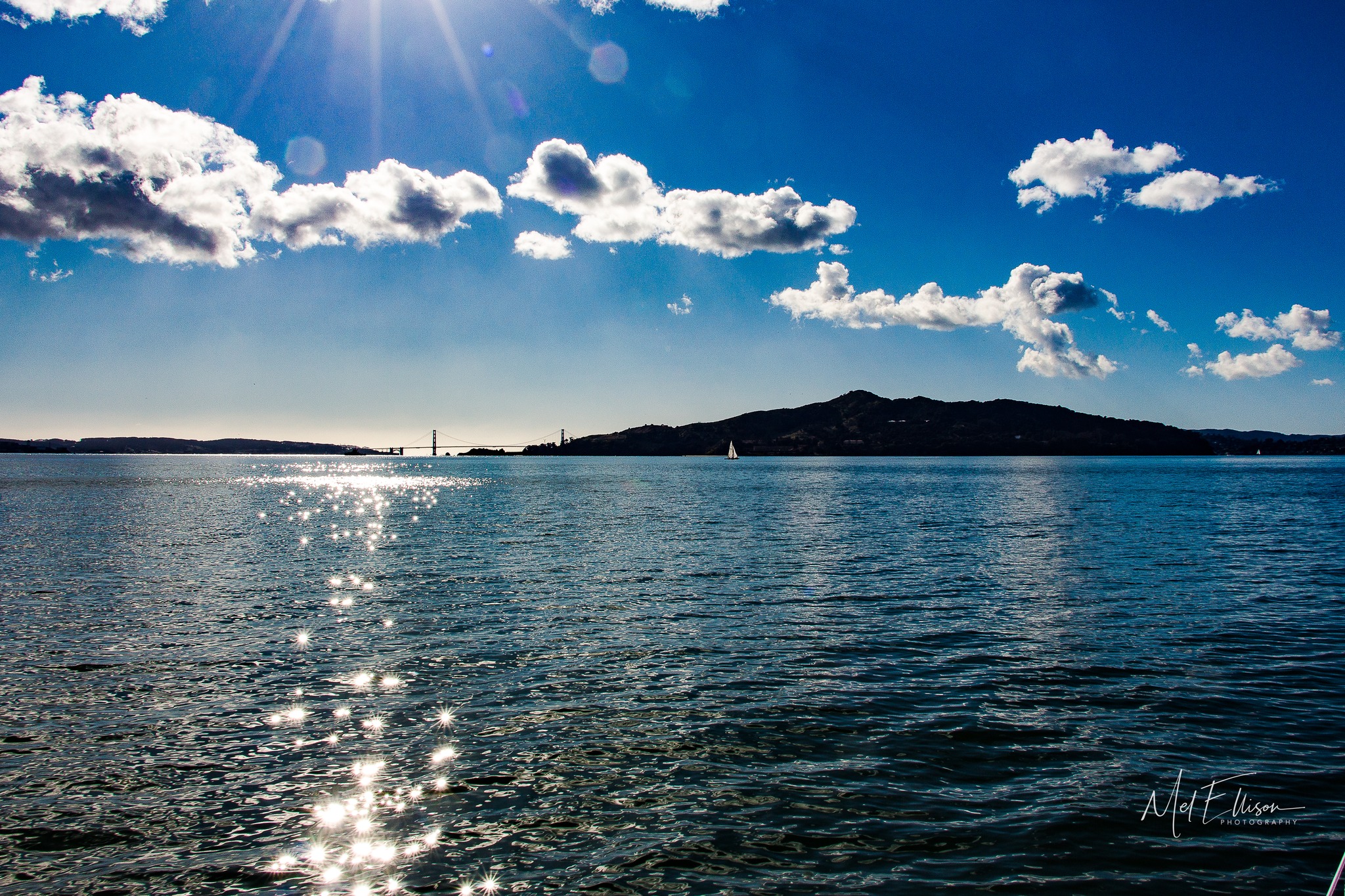 Lynn and I backed “Mystique” out of her slip in Sausalito, sailed her down Raccoon Strait and on to the Berkeley Marina where I had agreed to meet a mom who had recently and most tragically lost her son. The plan was to to take her, and a few of her son’s closest friends just outside the Golden Gate Bridge where she was to consign her son’s ashes to the icy cold depths of the Pacific Ocean.

It’s often said that there is no grief on this green earth greater than the grief of a mother who has lost a child….and that only a mother can truly know the profound depth of this loss. But on this clear, cold day in February, I did come to a much deeper understanding of the dark, bottomless abyss of that singular sorrow and heartache.

When all were safely aboard, we untied “Mystique”, motored out past the Berkeley breakwater, raised her sails, and set a westerly course towards the Golden Gate Bridge. The Bay was a sparkling, deep cobalt blue, reflecting the spectacular blue of the skies above, which were randomly dotted here and there with puffy, white cumulus clouds edged with hints of gray.

With our cargo in a cardboard container and awaiting its imminent final dispersal, the conversation was understandably spare, with occasional and somewhat strained and stilted attempts at lightness…while the heaviness and finality of what had brought us all here, and what we were about to do, hung heavily over “Mystique” like a dark, suffocating shroud.

As we sailed towards the Golden Gate Bridge, we learned that her young adult son had recently been admitted to the hospital for what was supposed to be a routine surgery (is there such a thing as “routine” surgery?)….and sadly never made it off the operating table alive.

Out past the Golden Gate Bridge, I pulled the sails and we began to bob and drift with the tide and currents. A few quiet words were spoken….and then the ashes were scattered and swallowed up by the waiting waters. After, we all sat in a solemn, almost stunned silence, each of us deep in our own thoughts, with the gentle lapping of the water against the hull the only sound breaking the stillness.

All of a sudden, the surface of the waters around us seem to erupt, shattering the silence as six or seven gray dolphins broke the surface and began to frolic, leap and dive, spraying and splattering water playfully all around us. It immediately pulled us out of our private inner reveries. Quickly glancing at each other, we all broke out in smiles at this unexpected but most welcome delight. What a beautiful moment the universe had just provided us! And at just the right moment too, when it could hardly be more needed and appreciated. Suddenly the air seemed clearer, the sunlight a little brighter, and the sadness that had just moments before hung like a grim, gauze veil over “Mystique”, lifted and dissipated into the ether. We could breathe again.

Later, after dropping our guests back in Berkeley, and returning “Mystique” to her slip in Sausalito, Lynn drove us back across the Golden Gate Bridge (she drives the cars, I skipper the sailboats!) . As we made are way through the Presidio, past Lincoln Park and the Legion of Honor, by the Cliff House, out the Great Highway, and home, I thought about the events of the day and said to Lynn it reminded me of a scene from the movie “American Beauty”. It’s where Ricky is talking to Jane about a day in his life, and his words seemed to capture most eloquently our day as well.

“It was the day I realized there is an entire life behind things, and that there is this incredibly benevolent force that wanted me to know that there was no reason to be afraid……ever.”, says Ricky.
He went on,
“When you see something amazing like that, it’s like God is looking right at you, just for a second…..and if you’re careful, you can look right back.”.
Jane ponders his words for a moment, then slowly turns her eyes towards him and asks,
“And what do you see?”.
Ricky, gazing off into the distance, bites his lip pensively, then answers gently:

Thanks to Mark Johnson for sharing this photo with us – beautiful! 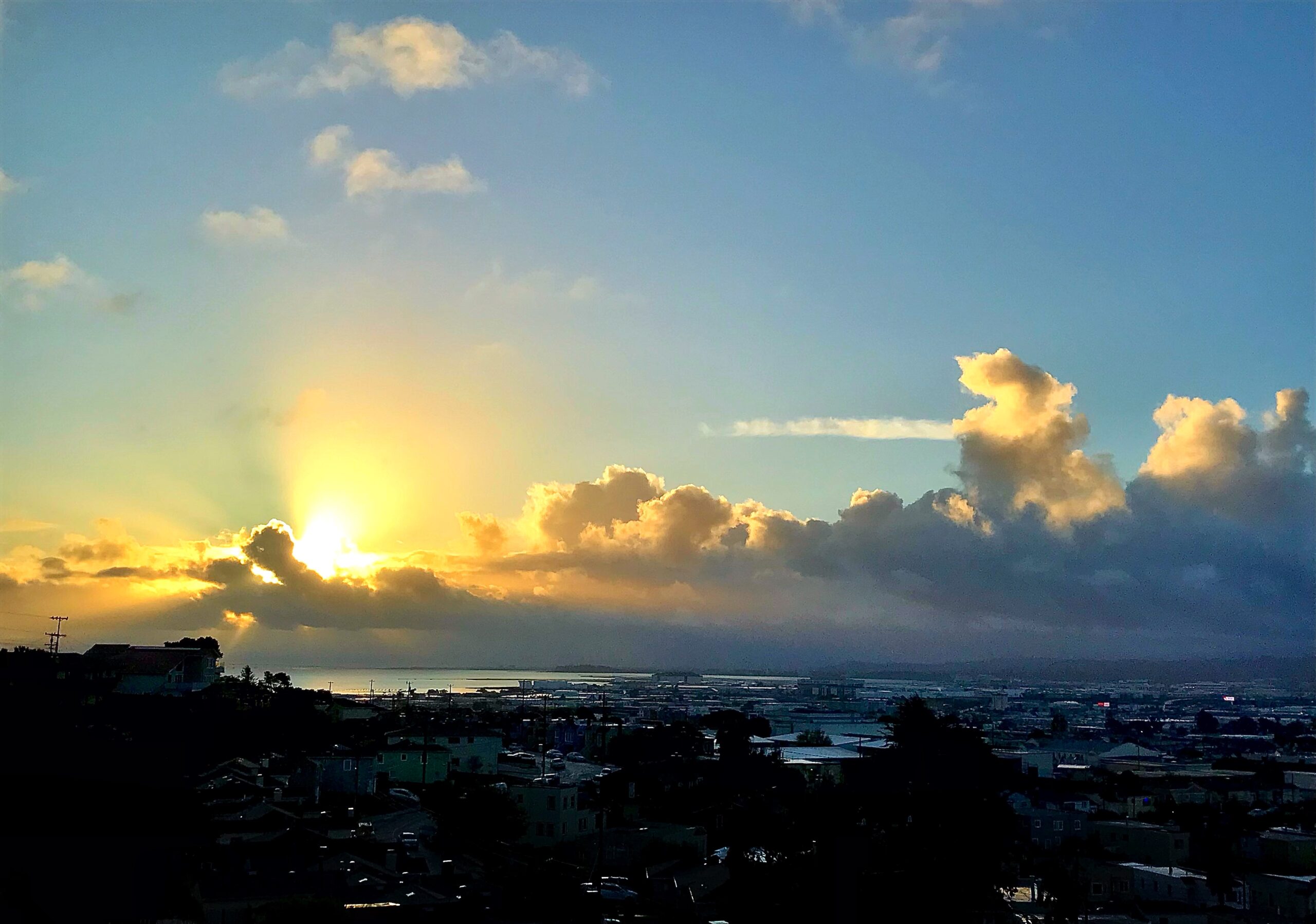 ← You Might Want to Cut Back on the Eggnog if You See…….
Menorah Lighting Ceremony Sunday December 18th on Steps of City Hall →
0 0 votes
Article Rating
Subscribe
Login

All Photos and the Essay… just Beautiful!

These are all very lovely, Kamala! December often brings extraordinary scenes to SSF; here’s one I took with my phone just this week. 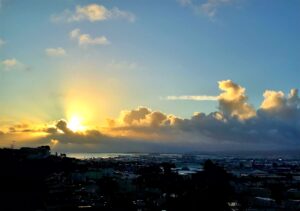 Thank you Mark, we have made an edit to ensure your beautiful photo is included as well.
Best of the season to you and yours.