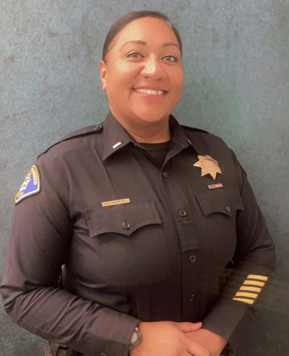 “Sergeant Fahmida Murphy is the perfect addition to our Lieutenant team. She has been with the police department since 2001 and is a true representative of our South City culture, and I couldn’t be happier to promote her to the rank of Lieutenant,” said Police Chief Scott Campbell.

Lieutenant Murphy was born and raised in South San Francisco; she attended Buri Buri Elementary, Alta Loma Middle School and graduated from El Camino High School. Fahmida started her career with the South San Francisco Police Department in 2001 at the age of 19 as a Records Specialist in the front office. Shortly thereafter, she was hired as a police recruit and joined the Police Academy, becoming a full-time South San Francisco Police Officer in 2003. Fahmida worked a variety of assignments throughout her career, including Patrol Officer, Downtown Bicycle Officer, Field Training Officer, School Liaison Corporal, Crisis negotiator, and Sergeant. As a Sergeant, Fahmida oversaw patrol teams, the Crisis Negotiation Team, and the Traffic Unit.

As a Lieutenant, Fahmida is currently assigned as the Patrol Watch Commander. Fahmida holds a Bachelor’s Degree in Criminal Justice for the University of Arizona and intends to obtain her Master’s Degree in Emergency Management. She is also a graduate of several leadership programs, including the POST (Peace Officer Standards and Training) Supervisory Leadership Institute and POST Supervisory Course. Her professional affiliations include the California Association of Hostage Negotiators, past President and Secretary of the Police Association Board, the California State Juvenile Officer’s Association, the Central Coast Gang Investigator Association, and the Peninsula Police Officer Association.

“I’m honored and humbled to be chosen as Lieutenant among a highly- qualified group of Sergeants within our South San Francisco Police Department,” says Lieutenant Fahmida Murphy. “South City is my home, and I’m proud to be able to serve the residents of this City to continue to ensure that it remains a safe city for all of our residents and visitors.”