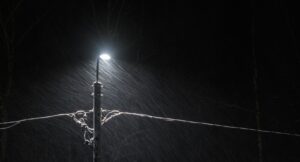 Capitola Wharf was split in two Thursday when a section of it collapsed into the ocean. The video [on their website] shows the devastation as waves pound nearby structures.

A tree fell onto a three-story apartment building in Oakland on Wednesday night, according to a tweet from Oakland Fire Chief Dr. Reginald Freeman. There were no injuries and one occupant has been located. Power to the building — located at 3293 Lynde St. — was compromised. The structure was turned over to Oakland Housing Authority, according to Chief Freeman.

The National Weather Service has issued additional Flood Advisories have been issued for:

Highway 1 between Stinson Bech and Muir Beach is blocked due to a rockslide, according to a tweet from Marin County. Responders are on the scene but there is no ETA on reopening.

This neighborhood on brookside drive near downtown Danville took a beating on Saturday when they were caught off guard by just how hard it rained. They made sure to be ready for the latest round as they have sandbags in front of their homes. The rain on Saturday just wiped out their front yards, sending mud into the streets. This time they made sure to remove the mud from the streets and keep the gutters and drains clear.

Scaffolding collapsed into structures and wires on 30th Avenue in San Francisco Thursday, according to a tweet from the San Francisco Fire Department. No injuries have been reported. Residents are being advised to avoid the area.

A mudslide is blocking the no. 2 lane on Northbound Highway 1 north of the Monterey Road onramp in Pacifica, according to a tweet from Pacifica Police. Drivers are being advised to use Sharp Park Road as an alternative route. CHP and Caltrans are on the scene.

BART is advising of delays of up to 20 minutes systemwide due to wet weather conditions.

6:18 a.m. — High winds cause downed trees as rain begins to pick up

Gusts of up to 39 mph are blowing in parts of the Bay Area as rain is beginning to fall, just as morning commuters are hitting the roads.