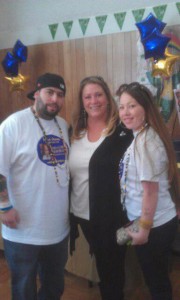 “Benevolent and Protective Order of Elks #2091 South San Francisco Lodge had 40 members step up and volunteer to prepare, cook and serve ( and clean- do dishes/pots/etc) over 500 breakfasts this past Sunday morning in a major fundraising effort to help establish the Juliana’s Journey Foundation in honor of Juliana Pena, the two year old that recently died from Neuroblastoma, a rare form of cancer.

Tickets for the breakfast, which included eggs, pancakes, sausages, bacon, juice, coffee/tea sold for $10 per ticket. ELK volunteers arrived at 6:00A.M to begin the long and successful day.  B.P.O.E. #2091 acknowledges the success under the leadership of Exalter Ruler Mary Ann Motoh of Daly City and Leading Knight Patrick Currier of South San Francisco. Elk Member, Kamala Silva Wolfe, Lodge Public Relations and Editor, served as Chair to bring the community together for this event.

The fundraiser also included highly successful raffles which were coordinated by Everything South City, the local community network established in 2009 by Silva Wolfe. Donation Coordinator, Brandi Magner, logged donations from as many as 60 businesses and private parties with items continuing to pour in even as the raffles were underway. Raffles were held every hour with over 12 numbers called per hour; the gifts were incredible.  It is because of Brandi’s extensive efforts the raffle had such an outpouring of donations coming in with tickets selling faster than the pancakes!

A spur of the moment auction led by Dave Gallagher, brought in $500 for a GIANTS WILL CLARK Jersey and another $500 for a 32″ LCD TV.   The Pena family also had Juliana’s Journey wristbands, magnets and stickers available along with a donation collection tin which was filled by generous friends.

A preliminary report show this event helped raise over $10,000 and was only 23 days in the making. Everything South City, The ELKS and the Pena family spoke of doing this event for months and were looking forward to the time Juliana would be healthy enough to attend.  Juliana’s determination and happiness are surely reflected in how quickly this successful fundraiser came to be.

The monies raised will now be used for funeral expenses as well as seed money to establish the Juliana’s Journey Foundation.

[…] in February 2012, before her 3rd birthday . Everything South City partnered with the SSF ELKS for a breakfast fundraiser the following month and raised $10,000 to help with expenses and seed money for the foundation’s […]