Many people were outdoors this weekend working to clean up the coasts, creeks, and to learn more about preserving our natural resources.  The South San Francisco Community Preservation Task Force, partnered with San Mateo County Department of Public Works, for the Colma Creek Cleanup and the Improving Public Places hosted an event at the Ferenekes Recreation Center in Orange Memorial Park where they enjoyed the theme ‘A Garden Party’.  Gus Vellis, of South San Francisco Parks and Recreation headed up the California Coastal Cleanup.

Improving Public Places is a group of residents and city staff that work to make otherwise unsightly common areas beatified with landscaping. IPP works under the auspice of the Department of Public Works and is supported by the Park and Recreation Department as well.  There are many IPP locations in your neighborhoods; Avalon Park Memorial Planters, Westborough at Orange Avenue, median strip outside of Joann’s Restaurant, corner lot on Chestnut and Grand, and many other locations throughout the city. 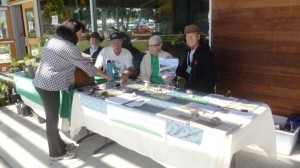 ted to wine and hors d’oeuvres and a tour of the Sculpture Garden as well as learning about native plants and conservation from guest speakers, including Joe Cannon from the Blue Mission Nursery.  Cannon is the stewardship director for San Bruno Mountain Watch. SBMW, along with Friends of Sign Hill, had tables set up outside the event with information on the work they are doing to preserve the Daly City Dunes and the northern slopes of Sign Hill. The Mission Blue Nursery was also selling native plants they have propagated.

Mayor Rich Garbarino and Councilmember Karyl Matsumoto were joined by members of the Park and Recreation Commission, Planning Commission, as well as Sharon Ranals (Director of Park and Recs), Terry White (Director of Public Works), and Mary Bates (Superintendent of Parks and Facilities). Monies raised will help fund IPP projects.

The Colma Creek Cleanup was headed up by Carole Foster, San Mateo County Water Pollution Prevention Program, Tom Carney of South San Francisco Code Enforcement and staff director of CPTF, The groups met up at Utah Avenue and Harbor Way and were joined by 65 volunteers, including 13 from the South San Francisco Police Ex

plorer Group, under the direction of Officer Elena Dominguez.   To get started the groups enjoyed doughnuts and coffee and completed their day with pizza, compliments of SSF Code Enforcement and Fire Prevention.

Just this one location alone saw over 9 yards of debris and trash collected which included tires and shopping carts. Pictures really do speak a thousand words when you see the before and after photos of this successful cleanup effort. 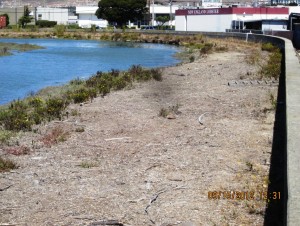