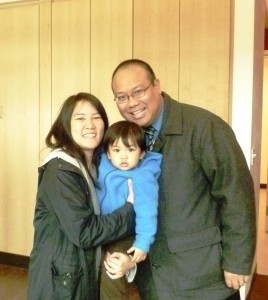 Mark Nagales with his wife Amy and their son Aidan

As a city council seat becomes vacant, Park and Recreation Commissioner Mark Nagales just maybe the person to fill that position. Nagales, a long time resident of South San Francisco, is married to Amy Lam and father to their son 21 month old son, Aidan. A congressional aide in Congresswoman Jackie Speier’s office, Nagales has focused on VA benefits which have grabbed headline attention lately. Since March, under the direction of Congresswoman Speier, over a million dollars in retroactive VA benefits has been recovered. ‘At times, we are the last resort for individuals and families who are looking for help.’ Nagales explains, “Hearing someone say thank you is the biggest reward I can receive after resolving their issue.’

His appointment to SSF Parks and Recreation four years ago has given him some great experience in helping to set goals for local residents and see them come to fruition. The remodel of both Westborough Park and Orange Memorial Park play areas has been appreciated by those with kids as well as neighbors. “Before they redid Orange Park, we saw a lot more ‘undesirable’ people lurking around.” Scott P. shared as he walked his dog through the park. “It’s good to see more kids playing here now. It seems safer.”

Nagales is also proud of the first Movie in the Park event sponsored by the city this past summer. “We had close to 500 individuals attend our first event and we can expect more family oriented events and activities in the future.”

Campaign committee papers have already been filed by Nagales, with the expectation of a 2013 run for city council. Now that Councilmember Kevin Mullin will be sworn into his new role as California State Assemblyman, Nagales’ is expected to apply for this vacancy.

When asked what he thought were the two biggest issues facing the city at this time, Nagales sited reduction in gang activity and revitalization of the downtown area. Applications for the City Council position will be accepted by December 13th. The City Council will hear an update on the status of applications during the regular bi-monthly meeting on December 12th. For more information on this process contact City Clerk Krista Martinelli at to (650) 829-6641.