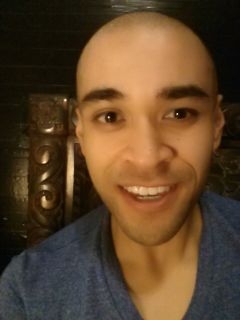 South City’s own Niño-Pierre Galang is among one of the top finalist in the 7th Annual Mr. Hyphen competition which takes place Saturday April at the Brava Theater in San Francisco.

Mr. Hyphen is an annual competition presented by Hyphen Magazine which awards $1,000 to the winner’s favorite charity. One of the finalists South San Francisco resident, Niño-Pierre Galang,  is currently a graduating Senior at UC Berkeley, as well as the Quality Director at Mabuhay Health Center, would like to see the money go to the health center should he win.  His story as written by Hyphen is intriguing;

‘Niño-Pierre Galang is our next Mr. Hyphen finalist to be spotlighted in our countdown to April 27. Niño is a graduating senior at UC Berkeley, Quality Director at Mabuhay Health Center, student of Tagalog, public health advocate, and Pokemon battle master.

Hailing from South San Francisco, Niño grew up surrounded by other Filipino Americans and didn’t think much about his identity. “Filipinos didn’t have to do much to find other Filipinos and those who shared their ethnic background,” he said. “That made it hard to get excited about a shared Filipino experience.” While it was common to see other Filipino faces in school and his community, it was much less common to know other kids who spoke any Filipino languages.

Fast forward to Niño’s sophomore year at UC Berkeley, when he decided to take Tagalog as an elective course.  He can’t pin his decision to one particular reason, instead pointing to “Random things fell into place, like I thought about, ‘Why not be able to talk to mom, dad and other Filipinos in [our language] or sh*t talk people without them understanding?’” he said.

Niño awoke to his Filipino American identity while studying Tagalog, and started to think critically about this identity and connections to a broader Filipino American community. “These classes all shaped my ideology and desire to advocate for this community,” he said.

More pieces of Niño’s growing interest in community activism came together when he started volunteering as a health coach at the Mabuhay Health Center (MHC), which provides health services to low-income individuals, many of whom are Filipino immigrants, in the South of Market neighborhood in San Francisco. Health coaches serve as a liaison between patients and health care providers, accompanying the patient throughout their visit to the clinic, and making sure they understand and are comfortable with the services being provided.

MHC strives to provide health care to people in the community who may not have access to mainstream services because of cost, language, and lack of availability. Providing culturally sensitive health care, including communicating with patients in their native tongue, is an important part of their work. For Niño, it was hard at first to talk to Filipino patients there because he didn’t know enough Tagalog. This only made him work harder in his courses. “I knew I needed to gain a better grasp of the language so I took my Tagalog classes seriously and just practiced…it paid off because I got A+’s,” he said.

Niño will be graduating in May, and even though he doesn’t have any plans yet, he is interested in pursuing a career in public health. His experiences at MHC have turned him into an advocate for providing critical health services in a way that is culturally sensitive. He believes that providing adequate health care includes creating a dialogue with the patient so that they have a full grasp of what doctors tell them and in turn, can make an informed decision.

For example, within Filipino culture, it is not polite to ask others to do something for fear of inconveniencing them. This concept of hiya, can result in a patient not asking for full clarification of what a doctor said. Whatever Niño decides to do in the future, he wants to make healthcare accessible to the Filipino American community, especially if they aren’t fluent in English or encounter cultural misunderstandings.

So what else does this Mr. Hyphen finalist do when he’s not going to class, working on his thesis or volunteering at MHC? He’s a Pokemon battle master. “My favorite Pokemon is Exeggutor. I taught it Swagger, which, strategically, is the best move.” Cheer for Niño this Saturday at the Brava Theater!

If you win the title of Mr. Hyphen, what do you hope to accomplish in your year-long reign?

“Valuable local outlets for the expression of Filipino heritage have recently been endangered. Since I’m not a native speaker of Filipino, if it weren’t for the Filipino language courses that I took at Berkeley, I would be far less able to help Filipino patients at MHC navigate the language of barriers they face in the health care system. During my undergraduate career, however, the availability of these courses was threatened by University of California budget cuts. It is clear to me that Asian American cultural outlets not only encourage familiarity with and sensitivity to Asian American heritage but also allow Asian Americans to interpret “Asian American” for themselves. The title of “Mr. Hyphen” would enhance the credibility of my efforts to preserve current outlets for Asian American cultural expression and would also offer me a platform from which to champion the creation of new such outlets.”

We’re bringing you our signature event of the year, Mr. Hyphen, with four fresh and outstanding API men committed to making a difference for our API communities!

Come watch our talented and charismatic candidates perform and compete for the crown and a $1000 cash prize to benefit the nonprofit they represent.

Hosting a pageant like none other, Hyphen magazine planned the first Mr. Hyphen in 2005 to celebrate Asian American men who devote themselves to worthy community causes. Mr. Hyphen is an energy-filled evening of fun and charity where five contestants compete in talent, fashion, and Q&A . The man crowned Mr. Hyphen will win a cash donation of $1,000 for his chosen nonprofit organization.

Hyphen was conceived in 2002 by San Francisco Bay Area journalists and community leaders who saw the need for a publication about Asian America that would go beyond Lucy Liu, sushi and yet another examination of the “model minority” story. With award-winning design and fresh perspectives that aren’t just about identity issues, Hyphen covers the artists and change-makers who are shaping what it means to be Asian American. By showcasing people outside the boundaries of stereotypes, Hyphen acts as a cultural catalyst, inspiring its readership to branch out — to do, think and create.