This past month we have witnessed some parents, and coaches, get out of hand during our kids Little League games and while authorities suss that one out, it seems many can use this reminder. This is a game for our kids; it helps them learn sportsmanship, teamwork, confidence, and physical ability. Yet too often it is the adults that appear to have forgotten the basics.  What is amazing is how often the parents continue on with hard feelings het their kids have moved onto something new.

On our Facebook page we shared this photo from another city and the reminders they have for the adults there; 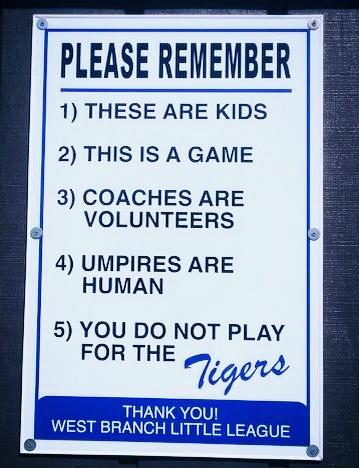 This is a game

You do not play for the Detroit Tigers

We asked our readers to comment on this photo ‘Could our Little League teams benefit from similar signage, especially as our Memorial Day Tourneys approach? Would it have made a difference over the Cinco de Mayo weekend?  What is a kid to do when the adults become violent? Or coaches are demeaning? How do we pass on to our kids the values of team work and good sportsmanship if our adults aren’t a good example themselves?”

Over 50 ESC friends liked the posts and here are a few of their comments:

Marwan Salfiti Parents need to understand, they all don’t have the next Buster Posey. This is a game. This is for the kids and they are there to have FUN. I have been coaching soccer and baseball in San Bruno and South City for the last five years and no matter what, I always make it clear on day one: we’re there for the kids and to have fun. If you have another agenda, this team and league are not for you. Parents need to realize that it takes time to develop players and a lifetime to develop true role models and leaders.

Sheila Folan Cronin I’ve had kids in SSF baseball for the past 10 years, and with the exception of a few incidents, we’ve had a great experience and hope to stick around for another ten years.

Raul Rodriguez As a former coach and board member it got worse including some coaches. I was asked back many times and said never again.

Lou Rodriguez Here’s the problem some people do and try to live out through their kids, I played all sports growing up as the season dictated, there were no traveling teams out there playing one sport all year long thus giving parents a false hope that their child will someday make it big, the parents put too much pressure on their kids as I did to my son as his coach by the time his sister o had learned but it was too late for if they don’t enjoy playing it will just be for nothing let them have fun that’s the most important thing its only a game.

Brian Perry Hopefully the parents support their kid in his next endeavor, once they realize he won’t be a major leaguer.

Janel M Chrestenson Pearson It’s all about good sportsmanship! If you as a parent can’t do that, don’t participate! It’s all for the kids, not the parents. Cheer your kid on no matter what their level of expertise. They will love you just for that!

JP Mason I gave it a shot coaching little league and saw this firsthand. What a joke some of these parents are. It’s sad.

John Kevranian shared an article about the senseless death of the soccer referee in Utah who was attacked by a 17 year old team member. We agree with the line from this article, “It’s not the ignorance of the child, it’s the poor manners of the parents,” said Lopez in Spanish, who played soccer professionally. “The yells and insults from the sideline from the parents make kids more violent.”

Tony Alejandre wrote “I felt this article to be appropriate for all those parents that may live vicariously through their children in sports” and he shared the following blog ‘Baseball Perspective: Hey Parents…. Your kid sucks’ which brought in many more agreeing it was a well written and timely share of information. Here is the article with full credit to Colin Young.

Now that I have your attention, I must qualify that it is not the child’s fault that he is terrible at (enter sport).  It has everything to do with you.
I have been coaching an 11 U select baseball team for about 4 months now and I am finding some disturbing trends among parents and their relationships with their children.  I have found that (a) parents exponentially over value the talent of their child, (b) cannot separate the emotions they feel during the game with that of their child’s, (c) find it necessary to inject their opinions and/or suggestions for the team because they pay money to be part of the organization, (d) severely hinder and stunt their child’s progress and passion for the sport they play.
Here are my suggestions and solutions to what I’ve described above, and in the end, I will explain to why these are necessary in order for your child to love to play the sport he or she is involved in and hopefully they won’t hate you by the time they are 16 years of age.
1.  Your child will only go as far as they love what they do
This not only applies to sports but life in general.  Support what they love and are interested in, not what you think they should be involved in.  You had a childhood now let your kid have theirs.
2.  You weren’t that good of a player (i.e. high school sports)
Most parents have an idea that they excelled in the sport they competed in high school.  However, hindsight is 20/20.  In the grand scheme of things you really weren’t that great so stop telling your kid you were.  They don’t need to live up to your lies
3.  Leave your child alone during competition
Your child is out on the field competing and does not need any added pressure from you telling them what they should or should not do.  Save it for after the game, and if it is not constructive, keep it to yourself.  Your insights on their play are usually driven by emotion and passion and typically come off as confrontational.  They have enough pressure as it is, they don’t need more from you.
4.  Let the coaches coach
Did you sign up to coach?  Did you volunteer your time away from your family to help others?  If not, you don’t have a say.  Yes, you may have coached Rec league or “daddy ball” but in no way does that qualify you to give me any suggestions as far as lineup, playing time, and direction of team.  If you don’t like it, leave.    You don’t have to stay and have every right to go somewhere else.  If that’s how you feel, then I’d rather you leave than be a distraction to our team.  (And typically this element comes from parents whose child is the least talented)
5.  Let your child enjoy the process
Sports are a never ending process of learning, whether it be social or fundamental.  There’s an inherent value to the social and fundamental construct of sports.  These early years of athletics can be unbelievably valuable for your child’s social abilities in the future.
People often ask what my parents’ role was in my climb to professional baseball.  I tell those people that my parents were supportive of my love of baseball and gave me every opportunity to succeed.  My father was a football coach and knew nothing of baseball and my mother did not play sports in high school.  Whether I played a great game or terrible game, my parents always treated me with support and love.  They never “pushed” me in any way and anything that I accomplished was because of my own desires and their support. They had complete trust in my coaches and I was very lucky to have great ones along the way.  So, when you look at your child and you see a major league baseball player or professional football player, understand that they may think of themselves as something very very different.  It’s not about you, and if it is, it’s probably the reason your kid sucks.  Parents: don’t be the reason for your kid’s failures, they’re under enough pressure already.
To follow Colin Young click HERE