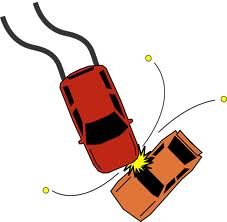 Fire dispatch had shown a full response of emergency services out of San Bruno plus engine 63 out of South San Francisco’s Arroyo Drive station. The location they gave was Sneath Lane and National.

Today Christopher Carey shared with us it was his brother and friends that were involved in this accident as they were on their way home from some other friends home. “Everyone is OK though”, Carey added.

“My brother Joe Carey and a couple friends were leaving one of his friend’s houses near Cherry Ave. on route down Sneath towards El Camino Real to bring my brother home in Brentwood neighborhood of South City. While they were crossing a green light on the way down to ECR they were blindsided by a truck that was being chased by police. It came out of nowhere. All were taken to SF General and luckily have minor injuries, the car was smashed and totaled. Responding crews said the car they were in saved their live, any smaller car could’ve been worse. My brother and co. Have to give statements to SBPD in next day or so. From what he told me it’s all hazy it happened so quick and his glasses got broken so he really couldn’t see during the aftermath. Please keep these young men in your thoughts. Scary situation but all is well now. All the guys are good kids and I’m just glad they made it out of that wreck safely.”

Everything South City seconds that, we are glad there are no major injuries and put a shout out to Joe and his buddies for a quick and complete healing.

← Movie in the Park
Demonstration heats up after being hosed down →