UPDATE: The plans have been approved and demolition of the current buildings is set to begin in 2015. This development will be a 10 year build out done in two phases with the Safeway and some residential to be completed in Phase 1.

Wednesday night’s City Council meeting was packed and standing room only as Union Groups filled the room spilling out to the atrium. At issue was council item #8 under the Consent Calendar which reads:

After six years of planning and over a million dollars spent, Mr. Mitchell, of the project company WT Mitchell Group, stood before the council as each member turned down the scope of the massive project on 14.5 acres of prime real estate. In addition council made it very clear a basic renovation of this prime real estate was not within the vision for this area located at 180 El Camino Real at Spruce and El Camino Real.  This was the third appearance before city council and the developers have not made any revisions that had been requested at previous meetings. Design review and the Planning Commission both had signed off on the plans.

Building Trade Councils spokesperson, Bill Knack, who spoke on behalf of the 26 Unions and 14,000 members represented stated this was not favored by local union workers who live in that area because there was nothing in place to hire local union members or to even pay prevailing wages. Mr. Mitchell countered that the new Safeway would be providing large numbers of union workers.

At issue for Union Workers, and the Council, was the fact that construction workers would not be paid prevailing wages which would hurt those in our own local communities that are in the construction business, especially our Union workers. “How can union members compete fairly when non union members will be hired at lower wages?” many questioned. Jason Mesa, our Hazelwood neighbor and a member of Sheetmetal Workers Union 104 was also concerned there was nothing in place to hire State Certified Apprentices.

Larry Andreatia, a South City resident and member of the Carpenters Union spoke about supporting Union jobs as it has been the Unions that have supported the council members when they were campaigning.

While the proposed Centennial Transit Village was voted down, a renovation of Safeway maybe still proceed. There is concern that the the absentee property owner Mr. Davidson and Shamain Partnership has not yet come forward and the only address Mr. Aronovsky could find was one in Mexico.

View Aerial looking south shows a massive build out for the location of the current Safeway, Firestorm shopping center

Additional concerns voiced by council were the lack of affordable housing, senior housing and open space for recreational use for those who would live in the 280 proposed units.  A general consensuses from those around town were highly optimistic that our city was finally going to have an upscale grocery store and shopping center yet many agreed the proposed plan was too large for the area.  “Five stories?” Bruce Wilms exclaimed “Do you have any idea how much traffic that intersection generates already? Transit village or not, we can not handle 280 homes PLUS stores.”

These concerns and more were shared by South City resident Steve Arnonovsky as he read for the record his letter below.  He covers most ground that was brought up at the council meeting which can be viewed HERE on the city website archive.  The Staff Report can be viewed HERE.

So bottom line folks, looks like we will not be getting a new Safeway for the time being until the property owner, developers and our city find some common ground. 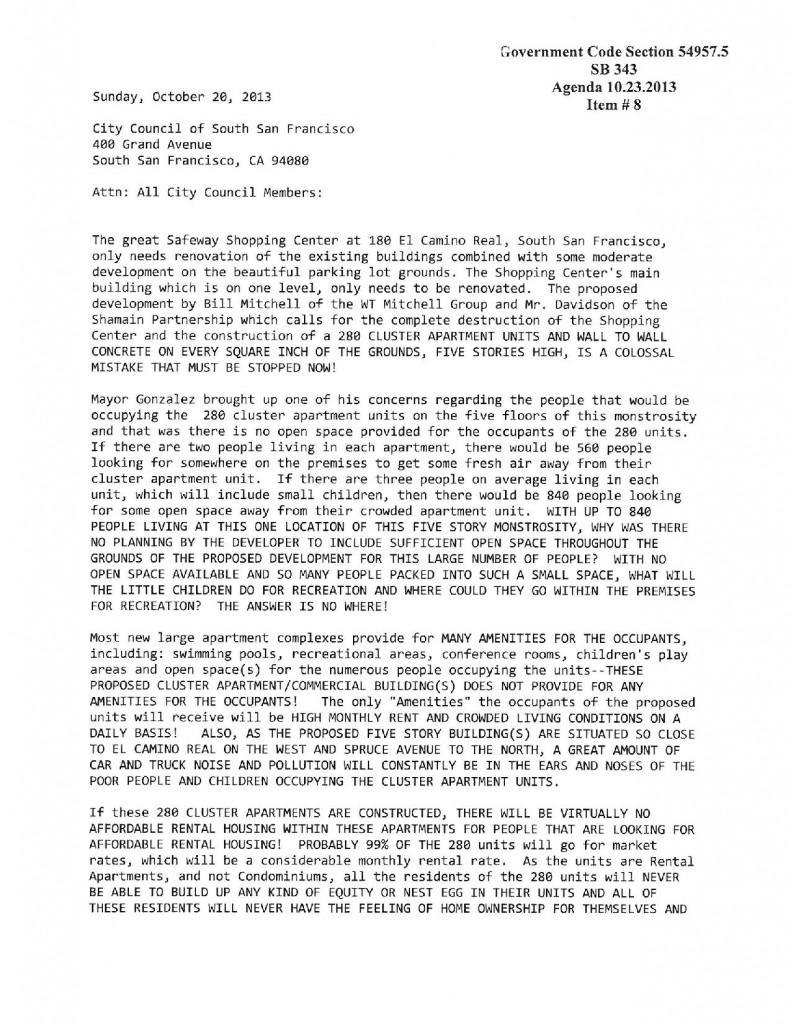 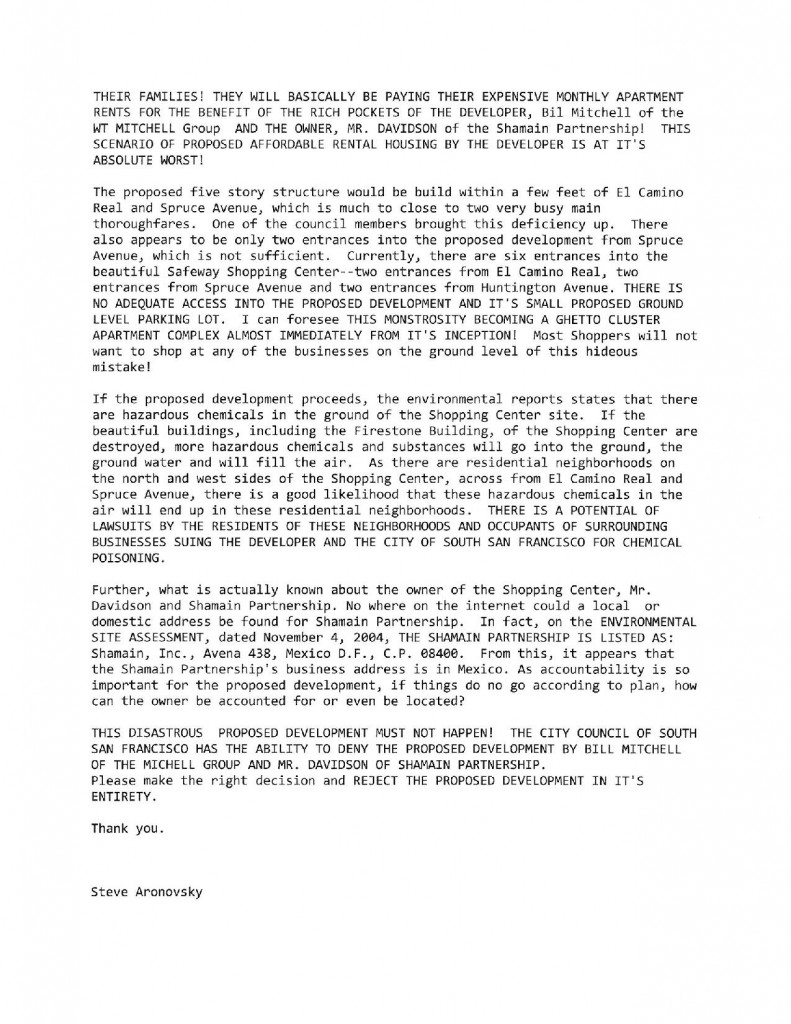 In response to the San Mateo Daily Journal article on this subject written by Angela Swartz Centennial Village plan shot down: South San Francisco council wants housing prioritized and prevailing wages for workers October 25, 2013, 05:00 AM By Angela Swartz Daily Journal were 2 comments hitting both sides of the debate and we are sharing them below:

South San Francisco needs affordable housing, especially for seniors and families who are being forced out of the Treasure Island Mobile Home Park whose owners want to convert that space to high end RVs that bring in much more money.

Jack Kirkpatrick · Top Commenter · Stanford UniversityThe investor should be able to hire whoever they want, and union membership should not be a requirement to work on this project.

The most important ballot initiative in the last general election: Four (4) states passed the “guarantees the right of workers to have a secret ballot in union elections (AZ, UT, SC, SD). The passage ranged from 60.1% – 86.1%. It is clear that workers want a right to secrecy without intimidation by peers & management protection from threat, intimidation and force, and protection from proxies who use the same tactics to require union membership!

Card checks invades privacy of thought about a personal matter or belief and should not become part of our collective bargaining and public policy labor law.

[…] need met without this massive project.  More photos of this proposed project can be found on ESC HERE as well as on the city website […]