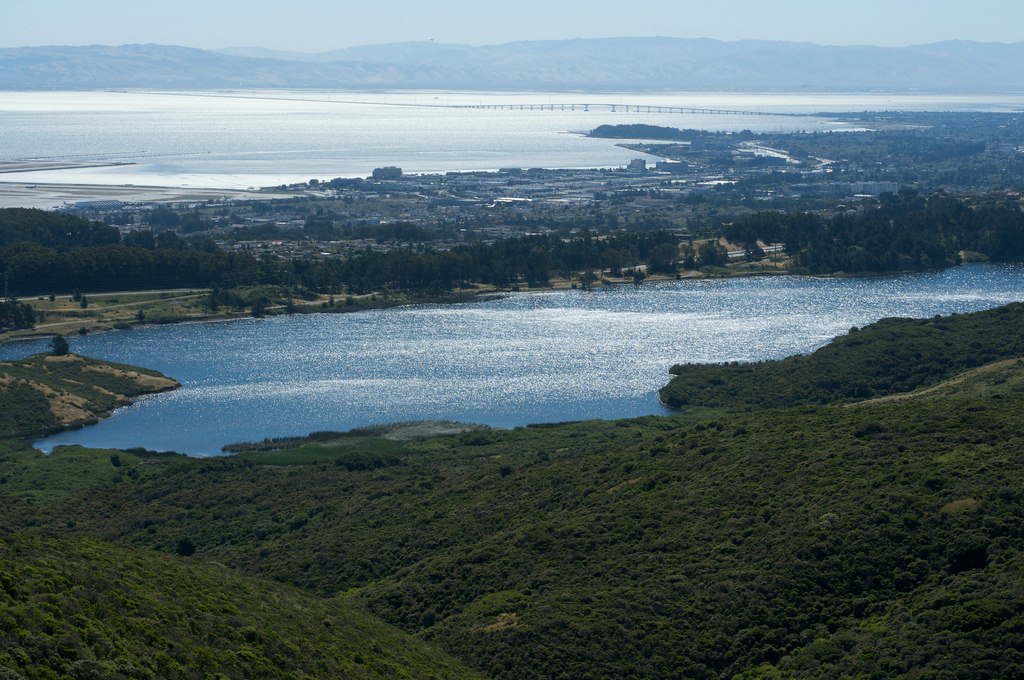 The SF Watershed facing towards the SF Bay
Photo: OSFWTH

Open the SF Watershed to hikers

We residents of the Bay Area value our open spaces and take protecting them very seriously.Open spaces are important, they provide habitat for wildlife and improve the quality of life for all of us.

From  the Southern end of Sweeny Ridge in San Bruno, to the eastern end of McNee Ranch in Pacifica, is an open space area that stretches all the way to highway 92 and then south past Filoli. This 23,000 acres property is not wilderness, it has in it an entire network of well-maintained service roads, some of which have a history of use all the way back to the 1860’s. The dirt and gravel roads in the area wind their way through thick forests of redwood, cypress and oak trees. The roads go past a beautiful alpine lake, Lake Pilarcitos, which was the first reliable water source for the city of San Francisco. This is the SF Watershed, and you are forbidden to go there.

The SF Watershed land is managed by the SFPUC, otherwise known as the San Francisco Water Department.  It is entirely closed to the public; it is only open to a few select SF water department employees and a few politicians from San Francisco.

The official reasons provided by the SFPUC why the public is excluded from this land are to protect water quality and wildlife. Yet, these arguments against public access seem strange and logically inconsistent. There are public trails on the western shore of Crystal Springs Lake and San Andreas Lake a stone’s throw from the water. The trails in the closed watershed start a thousand feet up and a mile away from the reservoirs.

The wildlife protection argument is equally perplexing. Hikers share Pt. Reyes National Seashore with herds of Elk and Mountain Lions. There has been no connection between public access and wildlife destruction on Mount Tamalpais, Sweeny Ridge, Purisima Creek Redwood Open Space, San Bruno Mountain, or any other of the parks on the San Francisco Peninsula.  The residents of the area who visit these parks have proven to be respectful of the wildlife for decades. The roads in the watershed are maintained by large weed whacking machine and are routinely used by service vehicles.

This inconsistency in logic received a fair amount of public scrutiny between 1998 and 2003 when a few SF Peninsula politicians and citizens teamed up with the Bay Area Ridge Council to open up the Fifield-Cahill Trail.  This trail is a service road that runs along a middle ridgeline north to south from Sweeny Ridge to Skyline Quarry off highway 92 and would help complete the Bay Area Ridge Trail. Five years after being ordered by the San Francisco board of supervisors to open the watershed the SFPUC finally opened this trail, but with such restrictions that most of the public would never see it. Access to the trail would only be by appointment only, docent led, limited to twenty people at a time with preferential treatment to equestrians, and there would be no access to any of the historical sites in the watershed or any of the other service roads what-so-ever. Today on the SFPUC website this program is touted as something the water department does for the public. It is important to note, they did this only after years of significant public pressure. 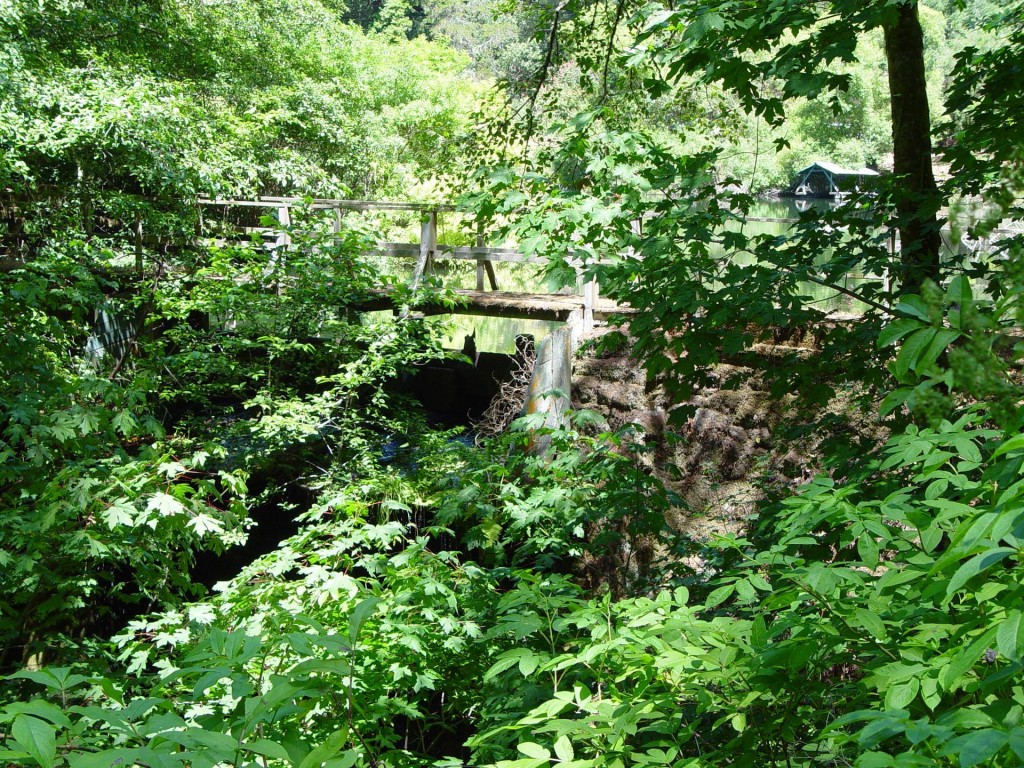 This is Stone Dam as it stands today in the San Francisco Watershed It was constructed in the 1870’s and stands approximately twenty five feet high.

The SF Watershed has some of the most important historical sites in the Bay Area, and because it has been closed for so long much of this history is forgotten from public consciousness.  The untold history inside the watershed is as important as the Bay Area discovery site, Mission Dolores, the Barbary Coast Trail, or any of our historically important places.

Pilarcitos Dam was completed in 1867 right after the civil war. Designed by master engineer Herman Schussler it was a marvel of engineering for its time. The dam created the first reliable water source for San Francisco, Pilarcitos Lake. Water was shipped to the city via a redwood flume powered by gravity.  Before this development water in San Francisco was sold by the barrel. Without water the city would not have grown, when you consider how much the San Francisco Bay Area has shaped the history of the world, it puts into perspective how important this dam is to our cultural history. There is at plaque at Pilarcitos Dam placed in 1967 at the one hundred year anniversary of the dams construction. It is a plaque paid for with public money, on public land, that no one in the public is allowed to see.

There are other significant historical sites in the watershed, including Stone Dam, pieces of the redwood flume that are still standing, homes dating back to the 1860’s and countless other artifacts left un accounted for left by the Spring Valley Water company before it was acquired by the San Francisco Water department in the 1930’s. 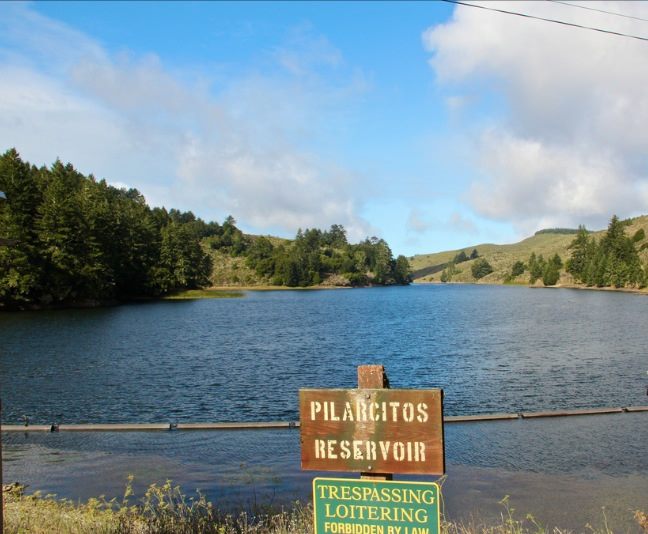 No trespassing on public lands per the SFPUC

So the question remains, if water quality and wildlife protection are not the real reason the SF Watershed is closed, what is the real reason. Tom Steinstra, writer for the SF Chronicle has long speculated that the SF Water department is trying to hide from the public view, the homes and infrastructure that it has built in this place. Mr. Steinstra has been inside the watershed many times both legally and illegally and is amazed by the amount of areas for relaxation that are apparently only for SFPUC employees or privileged visitors to the watershed. All of this, built with public money on public land.

The fact remains however that this is public land and we (the public) have an interest to access it. Access to the SF Watershed for activities as simple as hiking, or mountain biking would make this an even more wonderful place to live.

In our back yard lies what would be to the SF Peninsula what the Point Reyes National Seashore or Mount Tamalpais is to Marin, an open space so vast and wonderful that is almost unimaginable. I believe that an effort to open the SF Watershed to public access is not only a worthy goal, but an obtainable one.  To do this we first need to spread the knowledge of what the SF Watershed is, what’s in it, and its historical significance to the public who owns it.

The SF Watershed is a 23,000 acre open space on the SF Peninsula that is currently closed to the public. ‘Open the SF Watershed’ is an organization founded by Andy Howse, a sixth generation Peninsula resident, who is dedicated to preserving and sharing our local history through education and exploration in a responsible sustainable manner. ‘Open the Watershed’ is working with the SFPUC, local and state officials, and the public, to see the current roadways opened for responsible public hiking, cycling and equestrians.

8 comments for “San Francisco Watersheds Must Open To The Public”