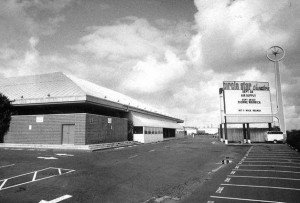 The Circle Star was known for the revolving stage which ensured all the 3743 seats were within 50 feet of the stage; there were no ‘bad’ seats in the house.

Social media, while marching ahead, looks back and embraces the past so much that it has even created a TBT; Throw Back Thursday.  Each Thursday people using social media such as Twitter, Instagram and Facebook ‘hashtag’ TBT and share a photo from the past. This last Thursday our photo subject was Circle Start, thanks to local musician Dave Crimmen’s suggestion.  The photo received over 100 ‘LIKES’ and over 80 comments from neighbors sharing memories.

Circle Star opened in the early 60’s and boasted 3743 seats surrounding a revolving stage and since no seat was further than 50 seat from the stage, every seat in the house was perfect.  Circle Star closed it’s doors in 1993 and the building caught fire in 1997.  An office complex now stands in it’s foot print.

Our post this past Thursday was simple and we ask you all the same questions:   #TBT Circle Star, Who remembers this place and what shows did you see?

Gigi Santinelli Santamaria I remember going there to see Rick James, and also went with my mother when I was a lot younger to see Tina Turner.

Gina Karas I saw a ton of country stars there, as well as Chuck Berry & Expose! Going way back!

Stephanie Miller Circle Star. I saw Jay Leno and ShaNaNa there about 40 years ago.

Kathy Loza I loved going to The Circle Star!!!

Margaret Morris Saw Richard Pryor there. He was hilarious!

Debbie Leighton Doherty My mom would take me to the Children’s Theater productions there when I was a kid. I saw Kenny Rogers there and also Tim Allen.

Don Hageman I worked there with my mom and brother. My brother and I were ushers…

Raul Rodriguez Circle Star, I miss that place. Saw many shows especially MOTOWN, Smokey which I took Stella before we were married, Temps, 4 Tops, Stevie Wonder plus others!

Vickie Pfeiffer Loved that place!! So many great shows there!! Good memories!

Marco Ramirez mc hammer.. and an extra for a show called midnight caller

Patricia Baker As I kid, we went there to see “Wizard of Oz” and “Cinderella”. Later in life, I saw several country acts there, including the Bellamy Brothers, Larry Gatlin & Bros., George Jones, and (my favorite) Merle Haggard.

Dirk Zander First concert Jackson 5 and I worked there in high school.

John Predmore I do, I do, lived in Redwood city when was first transferred to the Bay Area… By General Electric Company!

Constance Maffei I used to work there. The last memorable shift I worked was Anita Baker…ask Krisi Riccardi what made that night so hard to forget. On second thought, let’s just leave that one in the past.

Anita Porpoise The Ohio Players, The Temptations, Kenny G, Diana Ross, Natalie Cole, and probably others. Saw The Music Man and Oliver there. Also ushered for Liberace when I was 11 or 12, under age.

Rose Rudometkin Many shows… Smokey, k c & sunshine band. Frank Sinatra, WAR, al Green, E,W!& F, and many more. It was a nice theater in the round.

Whitney Connors-Pasion ohhhh ya!!!! Carpenters ……Peaches and Herb……..Commodores……….Tower of Power

Noel Hayes BB King. Bobby Blue Bland, James Brown, Sinatra, Roy Buchanan, Dr John, Lonnie Mack, and Many other Blues bands andsaw the ones on this list many times there

Christina Fedelin Oates Kool and the Gang, Jackson Five, Ohio Players, Stylistics, Whispers, Commodores, and so many others. So many great memories. I really miss that place.

Karen Johanson I saw a theater in the round productions of Peter Pan, with Mary Crosby as Peter, and Carousel with Anna Maria Albraghetti (sp?). Many concerts in the following years.

Wesley Nelson You did not see Frank???

Susan Gerkensmeyer O’Hare Hey Tom you saw those guys there?? I never knew!! I saw a few in my day too.

Kathleen Rogers Frank Sinatra, Liberace, Redd Foxx, The Kingston Trio to name a few. What a

Peggy Vogele Kid in the 60’s….Lil Abner & Babe’s In Toyland

Mike Delucci Where was this at?

Karen Cass Too many to count. The best was Liberacie on the revolving stage in his outrageous costumes.

Athena De Leon is the drive in

Reenie Eaton Saw Cheech and Ching there while in high school. Fun times. Rode from SSF all the way in the back of a pick up truck with friends Debbie Hensic Loudon Mary Brasher etc.

Andy Chan Gallagher, Dangerfield, Carlin… music groups America, Tower of Power, Peaches and Herb… I think Doobie Bros played there too, but I think I saw them at the “Day on the Green” years

Diane Gagliani I saw Frank Sinatra at the Circle Star and Neil Diamond and Tower of Power.

Mike Erin Girimonte to many to remember,our dear friend Ida Hynes used to be an usher there for years

Helene Orsini-Vencill Many shows I have see there. Dianna Ross, Tony Orlando and Dawn, Sony and Cher and the Fifth Dimensions.

Jan Mazzotti Diana Ross…Sonny & Cher….Kenny Rogers and I’m sure some more stars. Loved that place, lots of great memories. Usually went out to dinner first at maybe “Charlie Brown’s” (remember that one?)

Steve Johnson I auditioned for a scholarship. Shelly winters was the judge. Dead drunk at 2 pm and snored through my best willy loman. Never went back