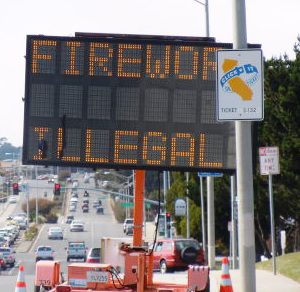 ALL fireworks are illegal here

As we approach the 4th of July our city has been rocked with many illegal fireworks which have lit up the sky and set off numerous car alarms. The City of South San Francisco has zero tolerance for fireworks here, ‘legal’ safe & sane or illegal ones. They all are banned from our city.

For years many residents have called this unfair and want to have neighborhood fireworks for the 4th. Folks complain of having to drive in traffic to congested areas to watch professional displays that may or may not be visible, depending on the fog layers. Others look at our neighboring cities of San Bruno and Pacifica with envy, why them and not us?

What if the City sponsored a professional event out at Oyster Point Marina while allowing an area for safe and sane fireworks? That was the goal of many in the past yet it never got off the ground.

This year seems to have brought a louder and  larger array of explosions which is a real concern.  Not only startling to residents but this has a negative impact on animals too.  And the potential of fire from projectile explosives is high especially during this dry season of drought. 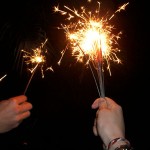 All fireworks are illegal in SSF, including Sparklers

However some have found other ways to enjoy the holiday with neighbors such as those in the Brentwood/ Avalon area. Each year they come together to enjoy an afternoon at Brentwood Park, last year claiming nearly 200 attendees.  West Winston Manor also comes together to enjoy the day in their local park on the 4th and other Holidays as well.

While not all neighborhoods are as cohesive, it is something we may all strive to imitate since it helps build stronger community.  And next month we can all look forward to National Night Out on Tuesday August 5th….. yet the element of 4th of July with fireworks is still missing for many.

When the Civil Grand Jury questioned if San Bruno and Pacifica should ban firework sales both cities referred back to their residents who strongly wanted to keep fireworks. Despite information from the findings detailing fires and injuries from fireworks in the county, both cities have listened to the residents and have respectfully declined the Grand Jury recommendation.

With such strong findings and equally strong public desire to have fireworks, where does one draw the line? This report is 13 years old and it would be interesting to see current numbers.

Summary: The sale of any fireworks is legal in only two San Mateo County cities, Pacifica and San Bruno. The 2001-2002 Grand Jury investigated a general complaint regarding fireworks sales in San Bruno and expanded its probe to the rest of the county.

The Grand Jury surveyed all police and fire agencies operating within San Mateo County. It found that fireworks cause numerous incidents of bodily injury and property damage, and the legal sale of fireworks in San Bruno and Pacifica has an adverse affect on all communities within the county. The San Mateo County Fire Prevention Offices Association endorses a position that fireworks should be limited to professional public displays. Sixteen of the thirty-four public safety agencies responding to the Grand Jury’s survey volunteered that fireworks sales should be banned throughout the county.

Issue: Should the legal sale of fireworks be banned in San Bruno and Pacifica, as in the rest of San Mateo County?

Background:Only two cities in San Mateo County, Pacifica and San Bruno, allow the sale of fireworks. Other cities, and the unincorporated areas of the county, have banned the sale and private use of any fireworks. San Bruno and Pacifica allow non-profit organizations to sell fireworks for fundraising purposes.

Fireworks sales in those cities have been both popular and controversial. Community groups in San Bruno and Pacifica, including youth sports organizations, service clubs, and churches, use the money raised by fireworks sales to help finance their activities.

Based on citizen complaints, the Grand Jury decided to investigate whether the legal sales of fireworks in San Bruno and Pacifica are appropriate, considering the hazardous nature of fireworks and the ban on sales everywhere else in the county. 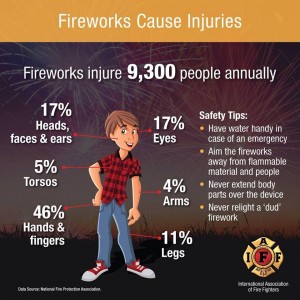 Findings:The Grand Jury surveyed all police and fire agencies operating within San Mateo County, including the California Department of Forestry, about the number of fires, injuries, property damage, and public contacts related to the illegal use of fireworks. Survey results show that there have been at least 205 fires attributed to the use of fireworks since 1996. In that same time period, there were also 42 reported cases of bodily injury, property damage, or loss of pets due to the illegal use of fireworks. There were also 5,830 other public contacts, such as noise complaints and confiscations, involving fireworks. San Bruno’s police and fire records for the past five years, for example, include 716 complaints, most of them regarding fireworks legally purchased in that city.

The San Mateo County Fire Prevention Offices Association endorses a position that fireworks should be limited to professional public displays, such as those annually presented in San Mateo, Foster City, Redwood City, and on the San Mateo County coast. Of the 34 agencies that completed the Grand Jury’s survey, 16 volunteered opinions, which appear in the Appendix, regarding the legal sale of fireworks. All were opposed.

Recommendations: San Bruno and Pacifica should ban the sale and use of all fireworks within their boundaries in order that there be a consistent “no sale or use” policy throughout the county to reduce the danger from the private use of fireworks.

We received the June 3rd letter transmitting the Grand Jury report. Thank you for sending it to us; I shared a copy with all of our city council members.

With respect to the issue “should the legal sale of fireworks be banned in San Bruno and Pacifica, as in the rest of San Mateo County”, I agree with the Grand Jury’s recommendation that “San Bruno and Pacifica should ban the sale and use of all fireworks with their boundaries in order that there be a consistent ‘no sale or use’ policy throughout the county to reduce the danger from the private use of fireworks”.

However, through several public votes residents of Pacifica have indicated their support for safe and sane fireworks. Therefore, I do not expect that the local ordinance permitting the sale of “Safe and Sane” fireworks will be rescinded, or the recommendation of the Grand Jury implemented.

Thank you for your interest in the City of Pacifica.

Thank you for the Grand Jury’s June 3, 2002, report regarding fireworks. San Bruno’s City Council discussed this matter at our August 13, 2002 Council meeting and agreed upon the following response.

In conformance with state law, San Bruno sells “safe and sane” fireworks for a limited time prior to the July 4th holiday. A significant portion of the proceeds benefit community organizations. The Grand Jury has already reviewed the City’s process for issuing fireworks permits and found no problems with the process.

We appreciate the diligent work of the Grand Jury in this matter and your interest in the City of San Bruno.

All things considered, what is your opinion on local fireworks?