Whiting Ridge Trail expands between Montara Mtn and Sweeney Ridge. It must be opened for responsible public use

Trail connectivity can be a bit of a mashup on the northern end of the San Francisco Peninsula. San Bruno Mountain is an island of nature, surrounded by a metropolis. Trails on the hillsides of the coast, although wonderful are largely not connected. The Bay Trail is enjoyable, nevertheless it largely exists by itself and similar to the connectors of the Bay Area Ridge Trail was largely planned after the area had already been developed. 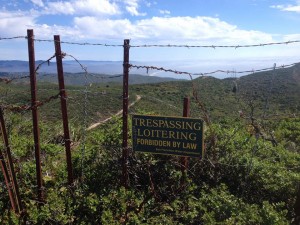 A large portion of this can connectivity problem can be fixed simply by allowing access on one trail, the Whiting Ridge Trail. This trail would connect the parks of Milagra Ridge, Sweeney Ridge, San Pedro County Park, McNee Ranch and Rancho Corral De Tierra.

The Whiting Ridge Trail is currently used as service road used by the SFPUC. Often called the “Sweeny to the Sea Trail” It connects the southern end of Sweeney Ridge to the McNee Ranch State Park at the top of Montara Mountain and also Rancho Corral De Tierra. Effectively this trail would connect five regional parks, something that would be good for every outdoor minded person in our public.

Despite the good work of the good people at the Mid-Peninsula Open Space Trust, they really do not do much north of Highway 92. Residents in San Francisco and the cities directly to the south have been largely left out of efforts to save open space and manage trails by this and few other wonderful organizations. With that in mind we should thank our lucky stars that we have the GGNRA.

The Golden Gate National Recreation Area is actually not one continuous park system, but a series of parks from southern Marin , San Francisco and Northern San Mateo County and it also includes Alcatraz Island. Signed into law by President Nixon in 1972 the GGNRA now manages over eighty thousand acres of parkland for the public to enjoy in the SF Bay Area. These parks include Milarga Ridge, Sweeney Ridge, and Rancho Corral De Tierra. McNee Ranch State Park lies in between these parks and is managed by the state.

Because the GGNRA now successfully manages three of these four parks, it would be wonderful if they would take over control of the Whiting Ridge Trail from the San Francisco Water Department (SFPUC). This is not entirely unprecedented, Sweeny Ridge was once closed to the public, and the trail line goes directly above San Andreas Lake. The watershed for the Whiting Ridge slopes into Pacifica; it is the perfect candidate for further public access into the unjustly closed SF Watershed. 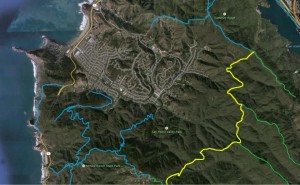 We have been in contact with the GGNRA, their position is that it would require a mandate and extra funding from congress to complete this task; although it is something they would be interested in doing. And if they cannot, perhaps a more local solution is available.

Opening up these parks and joining them together gives the public the opportunity to learn about our natural wonders and to feel what this region was like before it was so haphazardly developed. It was not too long ago that the San Francisco Peninsula looked very different. As much the stories from the gold rush in 1849, to the rum runners and speakeasies on the coast during the prohibition era has literally been paved over. It is also true that this landscape is not entirely gone. Much of what this place looked like still exists in these parks, unchanged and eternally preserved as public recreational areas. Equally preserved and waiting to be explored is the large area these parks surround, the San Francisco Watershed, a parcel of public land so huge that is may take more than one organization to manage it.

For thousands of years the Ohlone peoples thrived on the SF Peninsula, a loose association of over fifty tribes  that ranged from San Francisco to Big Sur and as far east as the Diablo Mountain range. The Ohlone shared a language, lifestyle and religious beliefs but likely did not see themselves as one tribe. Today the largest relics of these original inhabitants lifestyle are the shell mounds found around the Bay Area. Shellfish was certainly a staple of their diet, but they were excellent hunters and gatherers. 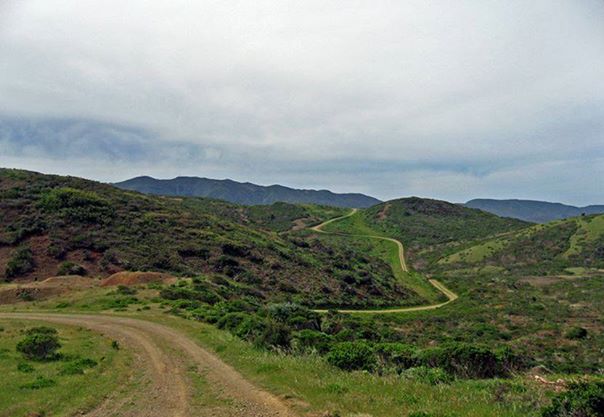 The Ohlone were generally unaware of outside world when on November 4th 1749 when Gaspar De Portolà sailed from San Diego, missed this destination at Monterey Bay, and landed in what we now know as Pacifica. He then led an expedition over the hill and was amazed to see the world’s best natural harbor, the San Francisco Bay. It was here on the top of what we now call Sweeney Ridge that anyone of European decent first laid eyes on the San Francisco Bay Area. Although when they made contact with the Portolà expedition they were very hospitable, unbeknownst to them was the beginning of the end for the Ohlone as the prominent rulers of the SF Bay Area. 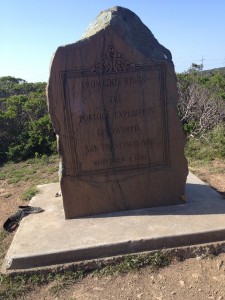 This marks the ‘Bay Area Discovery Site’ on Sweeny Ridge

Over two hundred and fifty years later hikers and joggers can ponder this history at the “Bay Area Discovery Site” a place on Sweeny Ridge marking the place, and the place in time when the representative from the Spanish Empire first laid eyes on the San Francisco Bay and our region was never the same again.

Starting to the North at Skyline College and ending to the south at the fence at the northern border to the SF Watershed, lays Sweeney Ridge. Located on the last leg of the Santa Cruz Mountains, and managed by the Golden Gate National Recreational Area (GGNRA) Sweeny Ridge is a wonderful 1,200 acre sprawling open space area with a network of trails that through coastal scrub and some abandoned historical military buildings that were the home the targeting system SF-51C Nike Missile installations designed to protect the SF Bay Area during the cold war. Sweeney Ridge has spectacular views, especially of Montara Mountain and its sister park McNee Ranch State Park and the closed trail that connects them, the Whiting Ridge Trail.

Rising 1,898 feet above sea level, Montara Mountain lies between Pacifica, and the coast side community of Montara. At 1,898 feet above sea level, on a rare clear day Montara Mountain has some of the most stunning views in the Bay Area. The view over the entire coast is mesmerizing; from here you can scope San Francisco beyond Sweeny Ridge, and San Bruno Mountain, Mount Diablo and the Peninsula. This vantage point has the best legal view inside the long unjustly closed to the San Francisco Watershed, and the only place to legally see Lake Pilarcitos.

Lake Pilarctos is the hidden lake in the SF Bay Area, not just hidden from public view, but of public consciousness. The public deserves access.

Lake Pilarctos is the hidden lake in the SF Bay Area, not just hidden from public view, but of public consciousness. Pilarcitos Valley was dammed the Spring Valley Water Works in 1867, and the lake provided the first reliable source of drinking water for San Francisco this lake unfortunately is not well known in the public consciousness, and is reportedly very beautiful. For decades this lake was hidden from the public as San Francisco elites used the property to host parties at a fishing lodge at the lake. Those days are long gone, but the existence of Lake Pilarcitos still remains hidden from general public knowledge.

Some other pipe dreams for our residents who use trails closer to San Francisco may be a pedestrian trail down Chestnut Blvd, across El Camino Real (The Kings Highway), over Westborough Blvd. and onto Sharp Park. This connector will feed right into the Milagra Ridge to Montara Mountain and create a much more connected park system, effectively drawing a line from the coast at Grey Whale Cove to the fabulous park of San Bruno Mountain. Put a pedestrian bridge over Highway 1 from Sweeny Ridge and Mori Point and now there would be connectivity from Bay to the Coast. A beach connector trail could connect Mori Point all the way to the Presidio in San Francisco.

Whiting Ridge Trails within site yet not within reach – for now.

Open the SF Watershed further and we would have a real “Grand Park System” that the public could traverse and learn about our natural history from San Francisco to the Redwood Forests in the in lower San Mateo County and Santa Clara County. This grand and unique world class parks system would improve the quality of life for everyone on the San Francisco Bay area, if not the region in general. A logical place for this to start is right in our back yard, on the Whiting Ridge Trail.

Article in the Half Moon Bay Review, November 2011 by Mark Noack “Preserving the Thin Green Line”