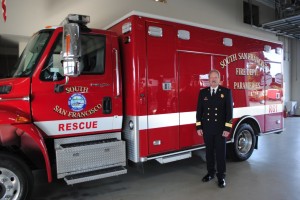 In addition to working in the public sector, Chief Kohlmann also brings private sector experience as a consultant and as a Senior Public Safety Specialist with PG&E where he taught Incident Command Courses, developed emergency response plans, and worked with local public safety agencies on emergency response training.

“I am pleased with the selection of Gerry Kohlmann as our new Fire Chief,” said Mayor Richard Garbarino. “The experience that he brings to the position will keep the South San Francisco Fire Department one of the finest in the County. I want to thank Chief Bill Reilly for his service and for helping with the transition.”

“I am very pleased to see Chief Kohlmann take command of the South San Francisco Fire Department,” said Chief Reilly. “Having known him for many years, I am secure in the fact that he will be an outstanding role model for the organization and a great asset for Team South San Francisco.”

With the selection of a new fire chief, Chief Reilly will officially transfer command of the Fire Department to Chief Kohlmann during the Change of Command Ceremony on Wednesday, January 7 at Fire Station 61, 480 N. Canal St, in South San Francisco. The event is open to the public and will begin at 10:00 AM.