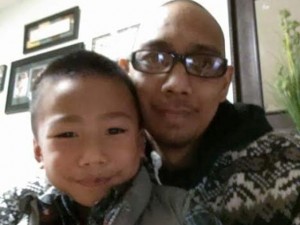 Ronnie Eclarinal, SSFHS c/o 1997 is battling cancer and needs help from our community

My brother Ronnie Eclarinal went to South City High, class of 1997. I was graduated from SSFHS as well, in 2001. I am Ronnie’s younger sister.  I am writing to ask if you could kindly share his story, he was diagnosed with Cancer a year ago and we are looking for help in every avenue we can.

My brother has medi-cal but it doesn’t cover the alternative medicine, the Nutritional IV therapy which helped him a lot in the first year. Each treatment, if he gets the full doses of what his body needs, costs us about $600 each time. When his cancer levels went down he stopped and only got the treatment when he was really weak, to save what was being donated. If anyone knows where we can get these at an affordable price, we’d really appreciate it. And donations are sorely needed and so much appreciated. For him, for us. For his son.

Please go to this website HERE and leave an uplifting message and there is an option to donate if you can. Our family greatly appreciates your help. #weareonewithron #pushPositive #mybrothersbattle #fightingforhisson

My family and especially my brother are very thankful and blessed to have family and friends that have surrounded us throughout the past year. I can’t believe it has been a year since we found out that my brother had cancer or the possibility of having cancer (it was confirmed on the 23rd) but having the love and support that we’ve received has been overwhelming.

An update on his condition: In November 2014 his cancer mark was down to about 200s and his doctor felt it was a good idea to put him on oral chemotherapy to maintain it and so that he didn’t have to go to the hospital every week for treatment. The pill would be taken daily.  Few weeks into the treatment, he felt that his body was aching more, it was hard for him to even take deep breaths, but he continued with it until the pain he felt was in his bones. He was brought to the ER a couple of times with no explanation to the pain, until we urged them to do a bone scan. It was then they found it has spread to his rib and his spine. Although it was small and his Dr felt it could be removed, it was still a huge concern for us. Especially when we got the result of his tests. The cancer has woken up and within a month or so, from the mark being down to 200, it has risen back to about 55,000!!!

The oral chemotherapy was not compatible with his condition or his body as we had hoped. So he is now back on the combination that was given before, Gemzar/Abraxane (2x a week) along with a bone treatment that is given through IV every 3 weeks. This means, he may be needing the nutritional IV therapy again to help boost his immune system and to help him fight the cancer, as it helped him before… so we are, once again asking that you help us to raise enough money to help him get these treatments for when he needs it.

Here is a link that tells his story, the fundraiser we began but had reached it’s deadline:
www.youcaring.com/weareonewithron

Again, please share this page and help us in this battle that my brother faces