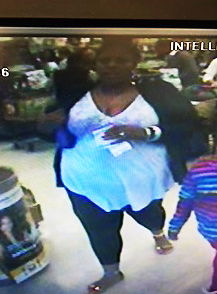 Suspect is wanted to theft of purse at Chestnut Safeway on November 11th. Stolen credit cards were used shortly afterwards

On November, 11, 2014, the suspect reached in to the victim’s purse and stole a debit card belonging to the victim’s mother. The theft occurred at Safeway located at 30 Chestnut Avenue.

The suspect then purchased items with the victim’s debit card at several locations within the hour.

The suspect is an African American female, approximately 30-35 years of age, obese build, and dark complexion.

You can use a debit card as a credit card without using the pin.

When she gets caught she will probably sue the police department for calling her “obese”.

How did she use a debit card? Was the PIN attached? I won’t mind showing an ID with the debit card if that is what is necessary.

Laura, debit cards can be used as credit cards in many stores, if one selects that option.