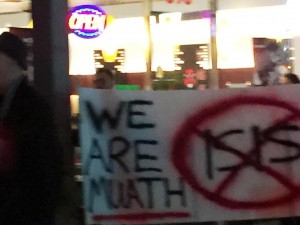 A vigil was held in South San Francisco for the Jordanian pilot Lt. Muath Al-Kasasbeh who was executed by ISIS.
Photo: Mary García de Ibarra

The execution of Jordanian pilot Lt. Muath Al-Kasasbeh has outraged the world as ISIS released the video showing Al-Kasasbeh being burned alive. Local Jordanians held a vigil in South San Francisco on the evening of  Saturday February 7th near the Jordanian American Association (JAA) headquarters on Linden Avenue. Although the group expected upwards of **500 people** , the event pulled a smaller, yet dedicated crowd.

“If anything good came out of this, it united us,” JAA president Eyad Ibrahin told Channel 2 News “We put everything, all of our differences aside.” 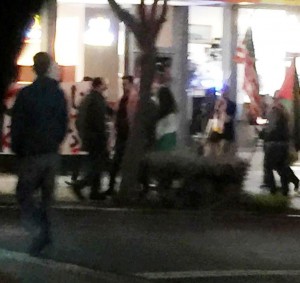 Neighbors in the area reported a group of approximately **50** gathered for the peaceful vigil. Mary Garcia de Ibarra was driving through the downtown area and took these pictures of the group on Grand Avenue. JAA reports there were over 200 at the event. 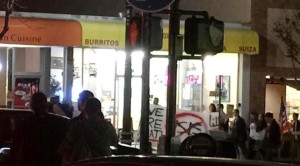 **Correction update: Per JAA there were over 200 people in attendance at the vigil.