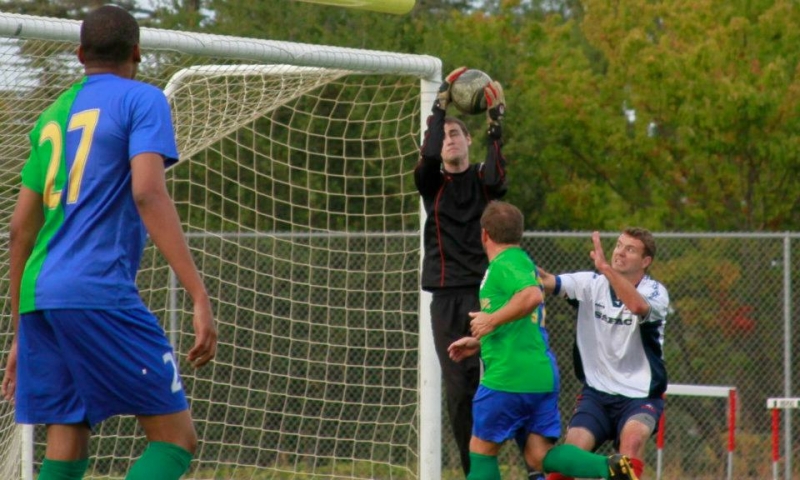 South San Francisco A.C. Midfielder and Captain, Bobby Quinlan, was recently awarded the California North District 1 Competitive Coach of the Year.  The District includes San Francisco, Daly City, Colma, Pacifica, San Bruno, Brisbane & South San Francisco.  This is a tremendous accomplishment and one that is richly deserved. We got to sit down with Bobby and find out about his playing background and learn more about his coaching duties.

” I started playing soccer when i was 5 years old, playing for competitive teams since then.  Growing up in Texas, I played for Dallas Inter, and Dallas Comets through u 17.  Some of my club accomplishments were…u 16 Surf Cup Champions, and u 16 National Semifinalist.  As a youth player I was also on North Texas ODP for u 14, 16 and u 17, making the Region 3 Team for my u 16 & u 17 team.  I was an ESPN top 100 recruit out of high school and participated in the Elite Academy camp hosted by Jurgen Klinsman with players such as Maurice Edu and Omar Gonzales.”

Out of high school, Bobby played four years at Lehigh University.  While at Lehigh, the team participated in the NCAA tournament in his Junior year, making it to the Sweet 16, the farthest a Patriot team has ever gotten in the tournament.

” Since then I have taken up coaching. Currently I coach a u 13 and a u 11 Vikings Soccer Club Team.  The u 13 team recently came in 3rd in the Division 2 Cup, and the u 11 team won the Nor Cal State Cup Blue Tournament.  In addition I coach the Urban High School boys and girls teams.  Last season the girls team was the BCL West Champions and Semifinalists in CCS, the State tournament for the school.  I also coach the Sacred Heart Cathedral girls team in the competitive WCAL.  This year I also joined on as Assistant Coach at the junior college, College of Marin.”

” The reason I love coaching is to pay forward the great coaching I received growing up, and empower the players to learn the game and love playing no matter the results.  I take pride in teaching players to make their own decisions on the field and understand why and how their decisions effect the ever changing game.  Building this confidence in players will hopefully allow them to keep playing well into their adult years!

It is obvious that the commitment, dedication and passion for the game of soccer is the same for Bobby the player as it is for Bobby the Coach.  He shared a special moment that happened in the semifinals of the State Cup…..

” During the semifinals of the State Cup with the u 11 Vikings team, we conceded a goal on a corner kick.  The team ran a great set piece and you could tell that they had practiced what they wanted to do and executed it.  Set pieces are not something I practiced with the u 11 players ( there are many other things that have a greater impact on a young player at this age ) but we have been working on reading and learning the game.  After about 10 minutes of play and still down 1-0, and without instruction from me, we won a corner.  These 10 year old players were able to set themselves up in a similar fashion as the team we were playing, and ran a very similar corner, ending in a goal for us.  It is this understanding and confidence in themselves to make good decisions that I truly love.  It was one of the proudest moments I have had as a Coach.”

That is Bobby Quinlan…. a tremendous athlete, a team player, a brilliant young Coach, and a terrific human being. All those who come in contact with him are inspired by his ability to give his best effort in everything he does.  To say that he leads by example is an understatement.  To say that he is the perfect role model is spot on. Congratulations from your SSFAC family, we are very proud of you !!