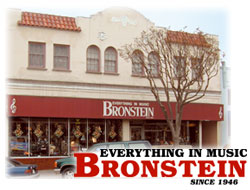 On February 9, 2016, Bronstein Music will celebrate its 70th anniversary in business. This independently-owned music store, located on Grand Avenue in South San Francisco, has been providing musical equipment, lessons, repairs, and music instrument rentals since 1946. Here is some information about the history of Bronstein Music.

On February 9, 1946, Milton and Celia Bronstein opened the doors to their new music store for the first time. The store, aptly named “Bronstein Music,” sold the latest and greatest music products – records and record players. There were listening rooms where customers could preview a record before buying it. There was also a machine that created wax records on the fly (think of “burning” a compact disc and you’ve got the picture).

Milton Bronstein was a veteran of the U.S. Army. He had served as the band leader for General Patton’s World War II division in North Africa, Anzio, and Monte Casino.  He also served as the director of the 6th Army Band at the San Francisco Presidio. As a young man, he travelled by ferry boat from his home town of Petaluma to San Francisco for trumpet lessons (this was before the Golden Gate Bridge was built), so his love of music was demonstrated early on in his life.

In 1968, Don Edwards and Rich Welker, two high school students, were hired as part-time help. The Bronsteins maintained a policy of hiring high-school and college students to run the store. They would allow the student/help to take on as much responsibility as they could handle, and to a large degree, the part-time help did everything from sales, to delivery, cleaning, repair, and collections.

In 1981, the Bronsteins retired, selling the store to Rich and Don. At the time the store no longer sold TV’s or stereos. Organ sales had been discontinued, but the store still sold acoustic pianos as well as band instruments, combo gear, and sheet music. A large portion of the business was rental of combo gear (including amplifiers, public address systems, etc.).

Over the years, thousands of customers have made Bronstein Music their supplier of musical instruments and support. Several generations have grown up with Bronstein Music. Such greats as Janis Joplin, John Fogerty, The Pointer Sisters, Jethro Tull, Wynton Marsalis, and many more have come to the store for their needs.