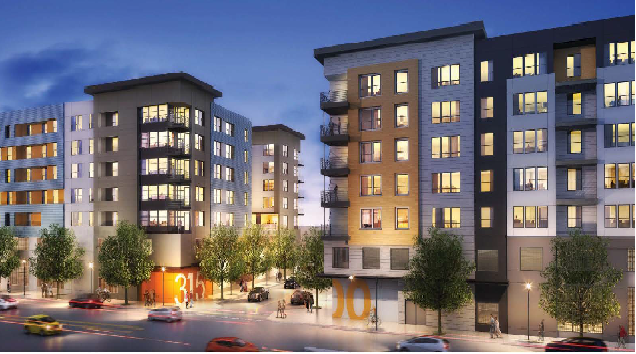 “We are excited to be kick starting the redevelopment of downtown South San Francisco,” said Drew Hudacek, Chief Investment Officer for SRGNC. “This project will help activate the main street businesses and create more use of the Caltrain station which is slated for upgrade soon.”

Located on 2.3 acres over four sites near the Caltrain station, the proposed development will consist of 272 residences in four stories over two levels of parking. It will offer residents a top floor lounge, fitness center and community room. The project will include streetscape improvements on Miller and Cyprus Avenues, including enhanced paving, furniture, street trees, lighting and bicycle improvements. Sares Regis Group’s contribution of community benefits is just over $5.7 million. Plans call for breaking ground in December 2016 with a completion date of January 2019.

“Housing is one of our top priorities in South San Francisco and this is a key project that begins to meet our housing needs,” said City Manager Mike Futrell. “Its location close to Caltrain will help support a vibrant, successful downtown.”

Designed by Thomas Cox of TCA Architects, the project brings together elements from the city’s manufacturing past and its high-tech future. The result is an architectural design aesthetic that is modern, yet industrial and progressive, presenting a taller, bolder facade facing the freeway, with the massing and open spaces scaling down as the community opens up to the city. This project is thoughtfully located to create a sense of community, encourage pedestrian traffic, and promote visual connectivity between Miller Ave. and the city.

“One of the main design challenges was creating three buildings that complement each other without being repetitive or overwhelming the scale of other nearby structures,” said Cox. “Our solution was to make each building architecturally distinctive, while interweaving shared design elements and materials, providing visual continuity to the overall community.”

About Sares Regis Group of Northern California
Sares Regis Group of Northern California and its affiliates, Regis Homes Bay Area and Regis Contractors Bay Area, are regional companies based in San Mateo, California. As leading developers and managers of commercial and residential real estate in the western United States, the companies have more than 6.5 million square feet of commercial properties valued at $500 million and over 2,800 residential units under development. Since its inception, the company has acquired or developed approximately 46 million square feet of commercial properties and 20,000 multifamily and residential housing units. For more information, please visit: www.SRGNC.com.

Gotta love Thomas Cox! Tells us that a main challenge was not ‘overwhelming the scale of other nearby structures’. Yup! Just hide those 7-story towers behind a 2-story sign.

Not a thought that the 2-3 drivers crammed into each of these $3k-$4k units will share a single parking space, meaning hundreds of more cars parking in the neighborhood of California/Cypress.

2 of 272 places are ‘affordable’, interesting. Affordable is a relative term on the peninsula. :-\