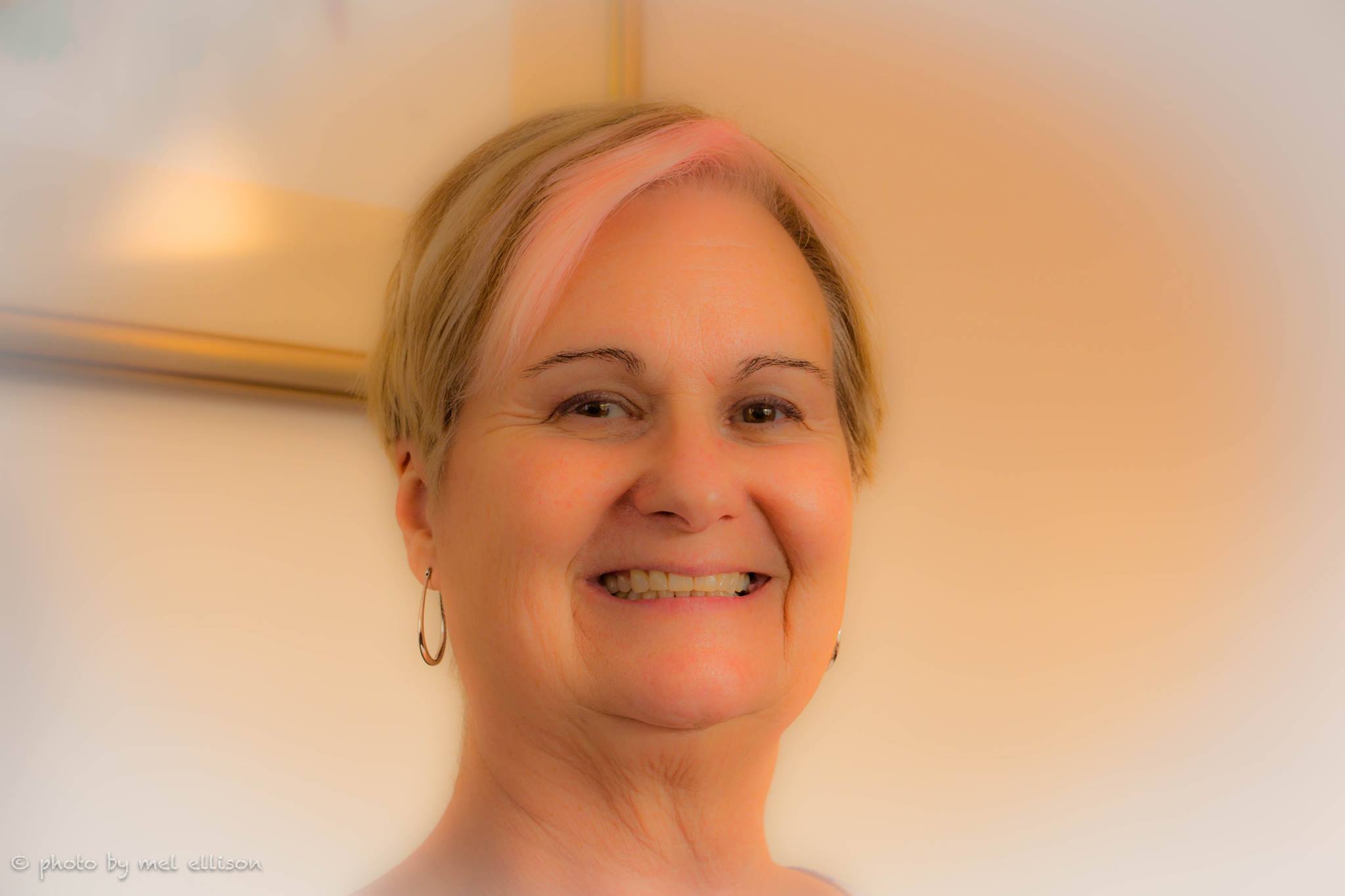 When she retired, the first thing she did was get a pink streak in hair……it’s faded a little, but can still be seen
Photo: Mel Ellison

Every now and then our attention is pulled to an exceptional person who has made a tremendous difference in so many lives and Lynn Brunetti Ellsion is one of the more special neighbors in our midst. Part of her story came to us through Avalon-Brentwood Park HOA President Steve Carey, with more in-depth understanding from Lynn’s husband Mel Ellison.

Recently Steve reached out to the City Council asking if they would close a session in honor of Lynn Brunetti Ellison upon her recent retirement from Stanford Hospital where she worked for 22 years in the Oncology Department. Steve recognizes all too well how cancer invades the lives of too many, taking some, sparing others, and the intense fight those stricken must fight and the ‘angels of love’ they have around them to help them through their treatment, through the toughest times they will ever meet. Lynn grew up on Alhambra, the daughter of Ann & Fritz Brunetti, strong community leaders as original homeowners in Avalon Park. Lynn and her husband Mel now live in Brentwood and continue the tradition of helping others in our communities, as Lynn’s dedication has proven.

He continues with his personal story “We were grief stricken when we learned that our friend Jen Ebert was suddenly stricken with a form of cancer. She was almost immediately sent to Stanford University Hospital for treatments. We asked Lynn if she would give Jen support through this very difficult battle in her life. Today, Jen has recovered and returned to her leadership position at one of San Francisco’s larger credit unions. There has been much happiness in this story. It is important however to remember that many victims of cancer do not win their battles. The courage and strength required to do work that helps these people is remarkable and inspiring.”

“For this reason, I am asking that the City of South San Francisco recognize Lynn Brunetti Ellison for the work that she has performed in the service of others and to honor her in her retirement. She is most deserving of the recognition of her community and she remains an example for young people who follow.” While we do not know if the City Council will in fact close a season in Lynn’s honor we wanted to share her story with our community because it deserves to be heard. “All heroes in society are not on a football field” Steve said.

We reached out to someone who would know her best, and her husband Mel Ellison was more than happy to provide us more background. You can feel the pride and love he has for Lynn and on what better day to share his story than on Valentines Day.

“Lynn returned to school to start a second career as an RN at age 38. She graduated from University of San Francisco Summa Cum Laude, with a Bachelors of Science in Nursing degree, in 1996. She was honored as the top Psyche Nurse in her graduating class and was made a member of Sigma Theta Tau, the Honor Society of Nursing. In 1994 while attending USF, she began working at Stanford Hospital as a nursing assistant and upon graduation in 1996, was hired by Stanford’s BMT (Bone Marrow Transplant) Unit as an RN. She went on to pass the rigorous test to become an Oncology Certified Nurse, and to become a member of the Oncology Nursing Society.

Along the way she has been honored as the Bone Marrow Transplant Nurse of the year, and is credited as the author or co-author of many oncology related abstracts and Publications. She became the assistant manager of the BMT Unit in 2002 and had continued in that position until her retirement after twenty two years this past January. She now intends to travel, pursue other interests and hobbies, and enjoy her six grandchildren.”

Lynn’s accomplishments are far reaching and an especially inspiring knowing she started her second career at 38 when too many might believe they cannot start again. Lynn proved not only can you start a second career you can be successful and reach so many that need your talents. We followed up with Mel, thanking him for the bio on Lynn and in his reply we could feel the admiration and love he has for his wife and we share that in his words here;

Three more things he wanted to be sure were attributed to Lynn, they speak deeper than the many awards and positions she achieved through her determination and hard work.

1)Why she got into nursing: She says that she always wanted to be a nurse but circumstances never seemed to be right. That is, until one day her late husband Ron urged her to pursue her dream and that’s when she went back to school.
2) The blurb above does not convey just what a special, compassionate caring person she is…..but not a pushover mind you, because she can be tough, indeed, when needed.
3) Nor does it convey how loved and respected she was (is) by her colleagues, staff and patients. I saw this first hand at her unit retirement party where the hugs, tears and stories flowed.

Today our community would like to acknowledge and thank Lynn for the selfless dedication and caring she has provided to way too many who have had the greatest challenges of life and death before them. And we take some comfort in knowing the path Lynn has set forth will be followed by others who have been inspired by our wonderful neighbor, thank you Lynn Brunetti Ellison!

Can We Make Quality of Life a Priority in SSF? | Everything South City