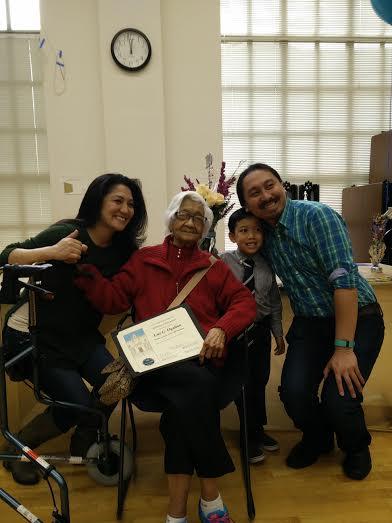 Luz Gamilla Ogalino celebrates her centenary with her family at the Magnolia Senior Center. Photo courtesy of Magnolia Center –

Woodrow Wilson was President and Edward Douglass White was Chief Justice of the Supreme Court of the United States when Luz Gamilla Ogalino was born. – That was 1916, a century ago, when Gamilla Ogalino arrived in this world – specifically San Juan, long long before the Manila suburb became the bustling city that it is today.

The year was historic for two countries: A few months after Gamilla Ogalino’s birth, the United States passed the Philippine Autonomy Act, also known as the Jones Act – later the Jones Law – which created the first fully elected Philippine Legislature. In October Manuel L. Quezon was elected Senate President and Sergio Osmena Sr. Speaker of the House of Representatives of the Philippine Commonwealth. Both would later be elected Presidents.
Presidential aspirations indeed mark Gamilla Ogalino’s life.
While candidates in both her native and adopted countries campaign hard these days for the top seats in their respective nations, relatives and friends showered Gamilla Ogalino with well wishes on her 100th birthday on March 3 at the South San Francisco Adult Day Center, where the celebrant is a participant.
Politics did have a place on celebrant’s big day with South San Francisco Mayor Mark Addiego offering congratulations and a proclamation honoring Gamilla Ogalino at the celebration coordinated by the Magnolia Center and the Ogalino family. Council Member Rich Garbarino personally attended the celebration.
The honoree spent her professional years in education, having dedicating herself to enlightening young minds after earning her education degree from the Philippine Normal College. She retired as a teacher.
After she was widowed, she joined her daughter Teresita in the United States and took her oath as a citizen of the United States in 2001. She has two other daughters and a son: Concesa, Julieta and Reynaldo.
“She continues to give loving care to her daughter’s four children. She has a happy disposition, an engaging smile and loving concern for everyone she meets,” said daughter Teresita. “She is an inspiration for all to live a long and happy life.”
The mayoral proclamation echoed those sentiments.
Guests enjoyed traditional Philippine fiesta fare of pancit and lumpia, chicken barbecue and salad They toasted the honoree with punch and presented her with a giant birthday cake, They went home with party favors in pretty little clutch boxes bearing the celebrant’s smiling face.
Joe Hunziker, South San Francisco Supervisor of Recreation & Community Services and Marianna Roman, Activities Coordinator, ensured fitting festivities to mark the milestone, Fran Guevarra, former banker, college instructor, management consultant and now events coordinator for S.S.F. Senior Services, told Philippine News. Laura A. Gigi is Program Coordinator.
– See more at: http://www.gmanetwork.com/news/story/561416/news/pinoyabroad/city-celebrates-fil-am-s-100th-birthday#sthash.MnFOaSX1.dpuf